A university that prizes it oral history collection now wants students to leave their voices... 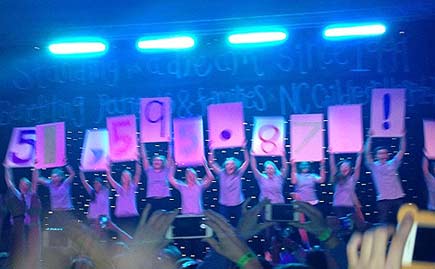 The UNC Dance Marathon, the largest student-run fundraiser in North Carolina, surpassed the half-million dollar mark this year, raising $551,595 to support the patients and families of N.C. Children’s Hospital.

The marathon allocates a portion of the fundraising total to its “For the Kids Fund,” which provides for expenses not covered by insurance or Medicaid that families may not otherwise be able to afford. In addition, the marathon offers several divisional grants each year to different areas within the Children’s Hospital’s pediatrics department.

The marathon now is a year-round fundraising effort with events such as percentage nights at local businesses, collecting donations from football fans before games, a 5K and Fun Run and a battle of the bands. The 16th annual event featured performances from student groups and testimonials from families of the hospital.

Dance Marathon is a nonprofit organization run entirely by students.