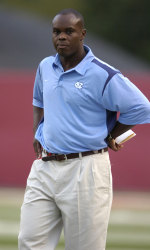 Everett Withers, for the past three years Carolina’s defensive coordinator and coach of the defensive secondary, has been named interim head coach following the dismissal of Butch Davis.

Withers, a Charlotte native who captained Appalachian State’s team in his playing days, will direct the team while UNC searches for a new permanent head coach.

Athletics Director Dick Baddour ’66 moved quickly with the start of preseason practice set for Aug. 5. “He is ready for this position,” he said in a statement.

“I believe Everett is the right person for our football program under these challenging circumstances,” said Chancellor Holden Thorp ’86. “I am impressed with the relationships he has built with our players and staff.”

“I realize this appointment is coming during a tough transition for our football players and staff,” Withers said. “My job and the job of our assistant coaches is to prepare these students to perform at the highest level this season.  I love Carolina and this community, and I will do everything I can to make the Tar Heel fans proud of this team.”

Withers has both college and pro coaching experience and is well-traveled. He has been, in chronological order starting in 1988, an assistant at Austin Peay, Tulane, Southern Mississippi, the New Orleans Saints, Louisville, Texas, the Tennessee Titans, and the University of Minnesota. He was defensive coordinator at Louisville and Minnesota and coached defensive backs under Mack Brown at Texas.

Last year, Carolina’s defense ranked fourth in the ACC and 30th in the country despite a roster decimated by personnel losses and injuries.

Withers’ contract for the 2011 season will be amended to reflect his promotion to head coach, and the team will seek another full-time assistant coach.