Time and service to the welfare of The University of North Carolina were common threads among five recipients of the General Alumni Association’s 2004 Distinguished Service Medals awarded on May 8. 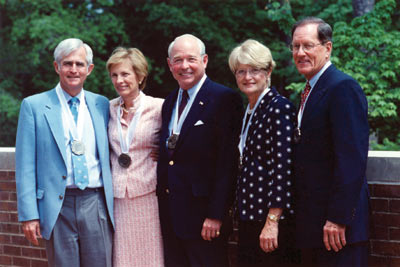 The Brysons, who graduated together from the School of Pharmacy, have spurred funding of a pharmacy professorship endowment; created an excellence endowment for the pharmacy school dean; supported medical research, the College of Arts and Sciences, the music library and the baseball program; and contributed to building funds for the pharmacy school addition and the House Undergraduate Library renovation.

While at UNC, Nancy Bryson played alto clarinet in the concert band, was active in the Kappa Kappa Gamma sorority and other campus groups and was an honorary member of the Valkyries, an order that recognizes outstanding character and contributions to Carolina’s academic climate. Vaughn Bryson was a three-year starter, varsity-letter winner and member of UNC’s first College World Series baseball team.

Vaughn Bryson is president of the medical and biopharmaceutical consulting firm Life Science Advisors LLC and the retired president and chief executive officer of Eli Lilly and Co.

Buckley graduated from UNC with a degree in education and was drawn back to the University when her daughter enrolled in 1996. This led her to serve on the UNC Board of Visitors, an experience that introduced her to another passion, the Carolina Center for Public Service.

With the help of her friend Watts Hill Jr. ’47, Buckley brought the first Outward Bound school to North Carolina. She is on the board of the N.C. Outward Bound school, now with more than 50,000 alumni; she encourages participation by UNC students through the public service center.

Frey was struck by the allure of a Chapel Hill springtime when his high school coach – also a UNC alumnus – brought his Michigan-based track team down South to train in 1958. Frey enrolled two years later.

He has sent two sons to UNC and shared his family’s commitment to the arts with the University. He has overseen gifts from the Frey Foundation to the College of Arts and Sciences that established distinguished professorships in American art, music and dramatic art.

Frey also has served on the National Development Council, the nation’s oldest nonprofit community and economic development organization; the UNC Board of Visitors; the UNC Arts and Sciences Foundation board of directors and steering committees for the UNC bicentennial and Carolina First campaigns.

Whichard, dean of the Campbell University Law School in Buies Creek, left Chapel Hill in 1965 with a bachelor’s and a law degree. He had no student loans to repay, but only $16 to his name. He felt indebted to the state and the taxpayers for his time at UNC, and he committed to give back through service.

Whichard has served UNC in numerous ways, volunteering as a GAA Board of Directors leader during the University’s Bicentennial; working on the boards of advisers of the schools of public health and social work; serving on the UNC Board of Visitors from 1994 to 1998; and becoming a charter member of the North Caroliniana Society, a nonprofit group dedicated to promoting increased knowledge and appreciation of North Carolina’s heritage. He also chaired the centennial celebration of the Order of the Golden Fleece, UNC’s highest honorary society.

GAA’s Distinguished Service Medals have been awarded since 1978 to alumni and others who have provided outstanding service to the association or the University. The association is a self-governed, nonprofit organization serving alumni and friends of UNC.