Mike Cohen grew up on the South Side of Chicago, known as a rough part of town — a friend says they didn’t know any differently, they thought that was just how the world was. 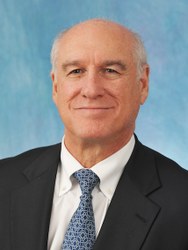 The perseverance Mike developed during that unforgiving start may have been the catalyst that propelled him to make the discovery Science magazine named the Breakthrough of the Year in 2011. Mike designed and ran the multinational clinical trial that proved treating HIV-1 with aggressive antiretroviral therapy reduced transmission to uninfected partners to almost zero. With the results of HTPN 052, he offered hope that HIV/AIDS might one day be obliterated.

The World Health Organization changed its guidelines for when to treat patients with HIV on the basis of Mike’s paper alone. “That’s very unusual,” said Dr. Fred Sparling, the man who hired Mike in 1980 as an assistant professor of medicine in microbiology and immunology at the UNC School of Medicine. “That’s a very, very big deal.”

Thirty years ago, when Mike decided to take on what looked then like an unwinnable battle to conquer AIDS, he had a certainty that this research could become big at the University; he had a vision for a global institute; and he had a $30,000 grant and no travel money to do research in Africa. Over the years, UNC’s infectious-disease group has achieved top-10 ranking among AIDS programs; Mike has led UNC’s Institute for Global Health and Infectious Diseases since its founding in 2007; and his funding has grown to hundreds of millions of dollars to support trials in 10 countries.

Mike has built an unusually loyal team to handle this very complex multinational project, in large part because he is loyal and supportive of them. He recruits top talent and trusts them to do their jobs. Micromanaging has no place in his leadership style. He shares the credit for his research successes, recognizing the importance of the special skills each contributed to the operation and channeling those strengths into something bigger than the individual.

With his disarming personality and self-deprecatory sense of humor, Mike connects easily with others. He knows everybody, their roles and their bosses, he knows the idiosyncrasies of big institutions, and he knows whom to call, and when, to get what his team needs. He makes complex science seem easy to understand, and he often uses humor to get his point across.

Even after his pinnacle achievement in HPTN 052, Mike hasn’t rested on his laurels. He is the Yeargan-Bate Eminent Distinguished Professor of medicine, microbiology and immunology at the medical school, where he chairs the division of infectious disease. He is a professor of epidemiology at the UNC Gillings School of Global Public Health, and he is the associate vice chancellor for global health. In 2012, he gave UNC’s December Commencement address. Among Mike’s many honors, he was the keynote speaker for U.N. World AIDS Day in 2000, and he received a lifetime achievement award from the American Sexually Transmitted Diseases Association, the NIH Merit Award, the 2013 North Carolina Award for Science and UNC’s O. Max Gardner Award.

Mike thinks big and outside the box. He takes risks. His UNC colleagues consider him the Dean Smith of the research world: He sets the tone for his players to achieve brilliance to ensure the whole team succeeds. The obstacles may be tough at times, but he has confidence in his team’s success. Because he believes in wiping out AIDS; that, Mike believes, is the way the world could be.