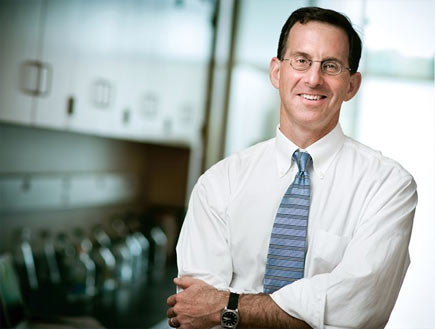 A team of researchers at UNC has successfully flushed latent HIV infection from hiding, with a drug used to treat certain types of lymphoma.

Tackling latent HIV in the immune system is critical to finding a cure for AIDS.

While current antiretroviral therapies can very effectively control virus levels, they can never fully eliminate the virus from the cells and tissues it has infected.

“Lifelong use of antiretroviral therapy is problematic for many reasons, not least among them are drug resistance, side effects and cost,” said Dr. David Margolis, professor of medicine, microbiology and immunology, and epidemiology at UNC. “We need to employ better long-term strategies, including a cure.”

Margolis’ new study is the first to demonstrate that the biological mechanism that keeps the HIV virus hidden and unreachable by current antiviral therapies can be targeted and interrupted in humans, providing new hope for a strategy to eradicate HIV completely.

In a clinical trial, six HIV-infected men who were medically stable on anti-AIDS drugs, received vorinostat, an oncology drug. Recent studies by Margolis and others have shown that vorinostat also attacks the enzymes that keep HIV hiding in certain CD4 T cells, specialized immune system cells that the virus uses to replicate. Within hours of receiving the vorinostat, all six patients had a significant increase in HIV RNA in these cells, evidence that the virus was being forced out of its hiding place.

“This proves for the first time that there are ways to specifically treat viral latency, the first step towards curing HIV infection,” said Margolis, who led the study. “It shows that this class of drugs, HDAC inhibitors, can attack persistent virus. Vorinostat may not be the magic bullet, but this success shows us a new way to test drugs to target latency, and suggests that we can build a path that may lead to a cure.”

The results were presented Thursday at the 19th Conference on Retroviruses and Opportunistic Infections in Seattle.

The research conducted is part of a UNC-led consortium, the Collaboratory of AIDS Researchers for Eradication (CARE), funded by the National Institute of Allergy and Infectious Diseases. The consortium is administered by the N.C. Translational and Clinical Sciences (NC TraCS) Institute at UNC, one of 60 medical research institutions in the U.S. working to improve biomedical research through the NIH Clinical and Translational Science Awards (CTSA) program.

Other UNC authors on the paper include Nanci Archin, Shailesh Choudary, Joann Kuruc and Dr. Joseph Eron of the medical school; Dr. Angela Kashuba of the Eshelman School of Pharmacy; and Michael Hudgens of the Gillings School of Global Public Health.

Funding for this research was provided by the National Institutes of Health, Merck & Co. and the James B. Pendleton Charitable Trust.