Elizabeth Edwards Dies of Cancer at 61

Elizabeth Anania Edwards ’71 — who became a public figure as a result of the political aspirations of her husband and who used her prominence on the national stage to advocate for health care reform and the needs of children — died Dec. 7 in Chapel Hill. She was 61. 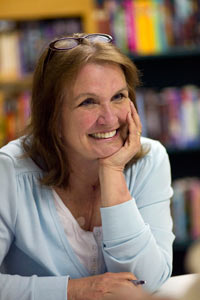 Edwards was noted for sharing with the public her ongoing efforts to keep her cancer in remission. Her family had announced on Dec. 6 that doctors from UNC Hospitals had said no further treatment was possible, and a message posted on her Facebook page that day spoke eloquently of both life and death:

“I have been sustained throughout my life by three saving graces — my family, my friends and a faith in the power of resilience and hope,” she wrote. “These graces have carried me through difficult times, and they have brought more joy to the good times than I ever could have imagined. The days of our lives, for all of us, are numbered. We know that. And yes, there are certainly times when we aren’t able to muster as much strength and patience as we would like. It’s called being human. But I have found that in the simple act of living with hope, and in the daily effort to have a positive impact in the world, the days I do have are made all the more meaningful and precious. And for that I am grateful.”

Edwards, who also earned a law degree from Carolina in 1977, was the estranged wife of John Edwards ’77 (JD), whose first run for public office in 1996 took him to the U.S. Senate; from there, he ran for vice president with John Kerry in 2004 and for president four years later. Elizabeth Edwards’ struggles were many — the loss of a teenage son, her husband’s acknowledged infidelity and her cancer. She was noted for exuding optimism as she faced difficult times, and she became an example to others to look at the best in life.

After Edwards earned her bachelor’s degree, she completed three years of graduate study in American literature before deciding to pursue a law degree. Throughout her life, she was an avid Carolina basketball fan. In law school, she met John Edwards, and they married in 1977, shortly after both had passed the bar exam. They separated early in 2010.

In addition to being a sought-after speaker on health care issues, Edwards became an author, sharing with the world her personal struggles in two books: Saving Graces: Finding Solace and Strength From Friends and Strangers in 2006 and Resilience: Reflections on the Burdens and Gifts of Facing Life’s Adversities in 2009. She participated in the North Carolina Literary Festival held at UNC in 2009.

As a child, her family moved frequently; her father was a Navy pilot who was with UNC’s Naval ROTC unit in 1970, during her undergraduate years at UNC. The family lived at 410 E. Franklin St., known as the James Lee Love residence and now home of UNC’s Center for the Study of the American South. While in law school, she was editor of the Law Review and later returned to the law school as an adjunct instructor. She also served on the UNC Board of Visitors from 2001 to 2005.