Folt Says Time Is Right to Step Down, Clears Away Silent Sam 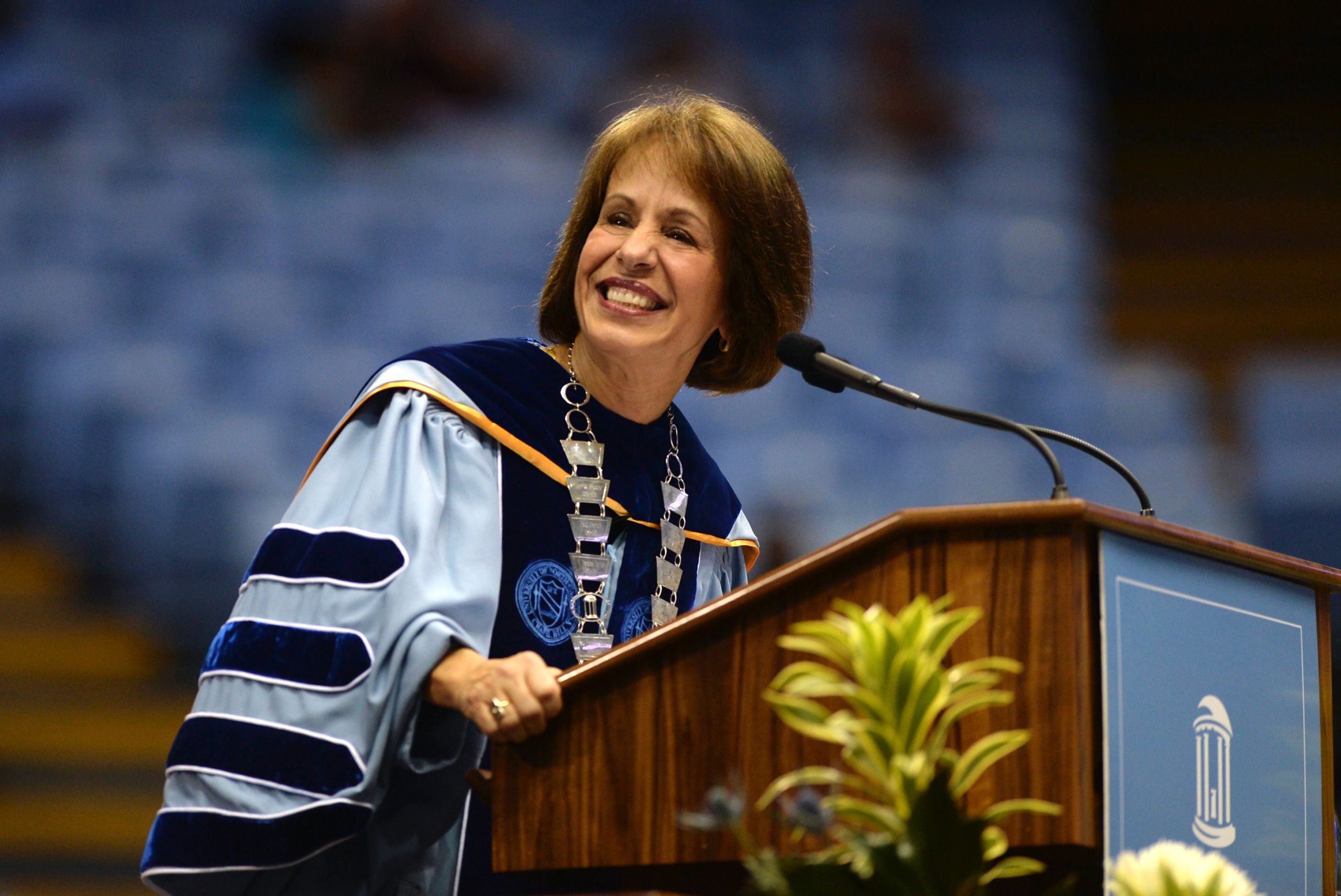 Chancellor Carol L. Folt authorized the removal of the base of the Silent Sam monument. (File photo)

Chancellor Carol L. Folt announced Monday that she plans to step down as chancellor at the end of this academic year in May.

In the same announcement, she said she was ordering the last of the Confederate monument removed from the campus.

“First, you’ve heard me say many times that it is the privilege of my life to serve as chancellor of this great university,” Folt said in a statement. “I’m deeply proud of what you’ve accomplished and what we’ve accomplished together since I became a Tar Heel nearly six years ago in 2013. I am writing today to let you know that I have decided to step down as chancellor following graduation, at the end of the academic year.”

She also said: “I have authorized the removal of the base and commemorative plaques from the Confederate Monument site in McCorkle Place. As chancellor, the safety of the UNC-Chapel Hill community is my clear, unequivocal and non-negotiable responsibility. The presence of the remaining parts of the monument on campus poses a continuing threat both to the personal safety and well-being of our community and to our ability to provide a stable, productive educational environment. No one learns at their best when they feel unsafe.” 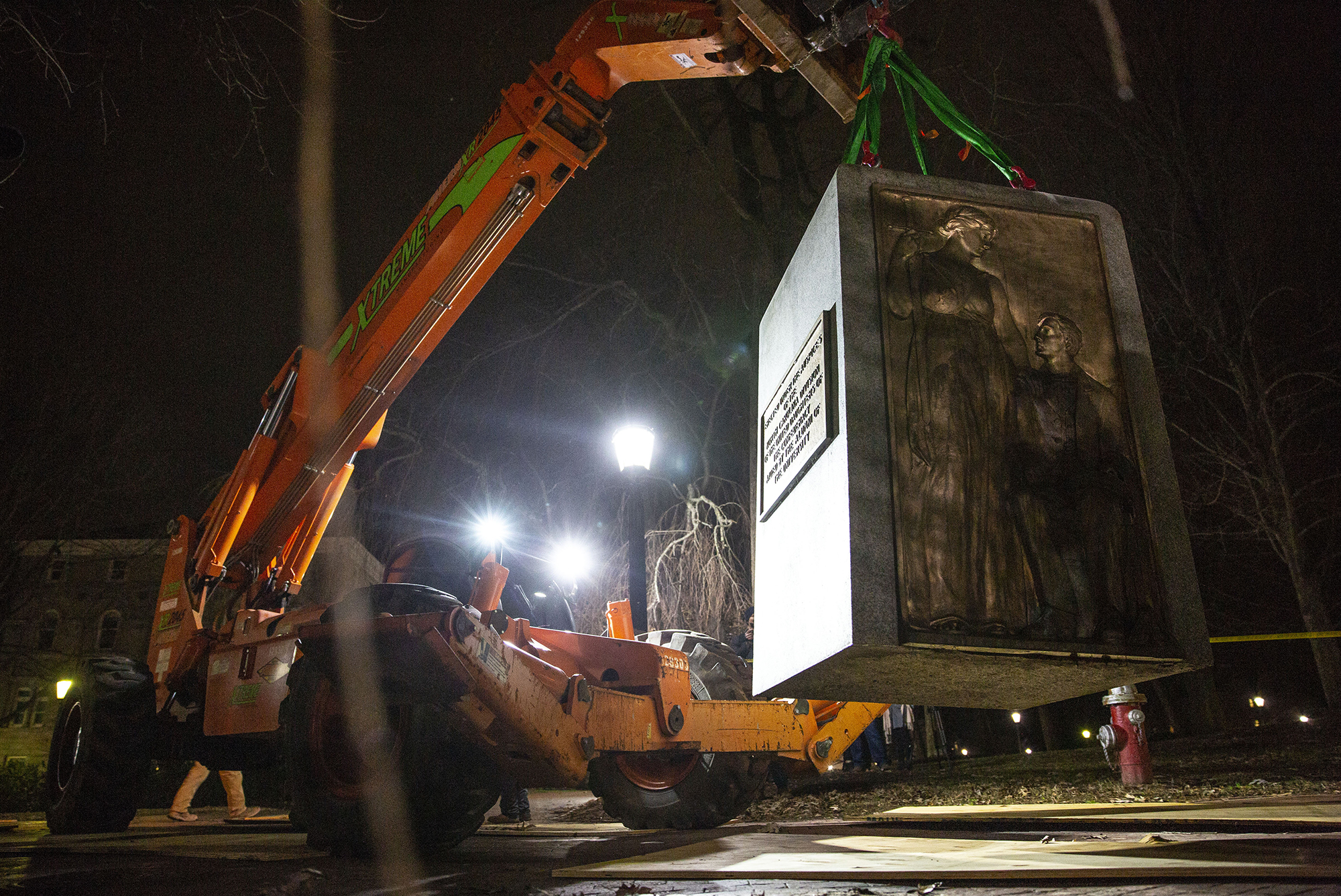 The base of the Silent Sam monument and the commemorative plaques attached to it were removed Monday night. (Photo by Alex Kormann)

The base of the statue and the commemorative plaques attached to it were removed Monday night.

While members of the Board of Trustees praised her accomplishments and thanked her for her service, the chair of the UNC System Board of Governors said he was caught off guard. The Chronicle for Higher Education reported that BOG Chair Harry Smith said the board had been meeting in closed session about “issues related to UNC Chapel Hill’s leadership” on Monday afternoon and that the governors had not been notified of Folt’s resignation before the public announcement.

Smith was quoted in media reports as saying: “We are incredibly disappointed at this intentional action. It lacks transparency, and it undermines and insults the board’s goal to operate with class and dignity.”

The most recent chapter in the Silent Sam story has Folt and the trustees proposing on Dec. 3 that the University build a history and education center near the campus’s southern border that would house the statue and the BOG responding two weeks later that the $5.3 million price tag for such a center was out of the question. The board set up a five-member task force of its members to work with the Board of Trustees, the chancellor and top administrative staff to come up with a different plan for disposition of the statue, which was pulled to the ground by its detractors in August.

“We support her decision to remove intact the base of the Confederate Monument and accept her decision to step down from her position,” wrote Charles Duckett ’82, Julia Grumbles ’75 and Lowry Caudill ’79, the three trustees who had been tasked with working on the issue. “We thank Chancellor Folt for working tirelessly to elevate our University each and every day to serve the people of North Carolina and beyond.”

The statement said that, under Folt’s leadership, “our University launched new efforts to expand access and affordability for deserving students; surpassed for the first time $1 billion in research expenditures; and developed our first-ever overarching strategic framework, ‘The Blueprint for Next,’ which will guide us well into the next decade.”

It noted that Folt has “played a vital role in the outstanding success of our $4.25 billion fundraising campaign. … Carolina has been well served by its 11th chancellor.”

Folt’s statement also said: “With the dedication and care of our staff and faculty, our schools are advancing curricula for the future and our students and alumni are succeeding in all fields. We’ve raised nearly $500 million in scholarships and aid, and our community is making discoveries every day that save lives and advance our state and society. As I have reflected on all of this, I’ve decided that this is the right time for me to pass the leadership of our outstanding university, with all its momentum, to the next chancellor, and look ahead for my own ‘new and next.’

“There is much I intend to accomplish with you in the next few months. I will continue to focus on our core mission, do all I can to make sure every person on our campus can thrive and feel welcome, and push forward with Carolina’s campaign and history task force. There has been too much recent disruption due to the monument controversy. Carolina’s leadership needs to return its full attention to helping our University achieve its vision and to live its values. And I want this semester to be exciting and fulfilling for every one of our soon-to-be graduates.”

Folt’s administration faced two of the most tumultuous issues in recent University history, both of which kept UNC in national headlines.

When she became chancellor in July 2013, Folt inherited at its midpoint what became a seven-year athletics-academics drama over fraudulent classes. That ultimately was resolved in October 2017, when the NCAA’s Committee on Infractions said it found no violations of its rules and announced that the University would not be sanctioned.

A simmering discontent with the University’s Confederate statue began to build in spring 2015, when the trustees voted to change the name of Saunders Hall because of its namesake’s leadership of the Ku Klux Klan. Large-scale protests and face-offs between Silent Sam’s detractors and supporters, sometimes violent, climaxed on Aug. 20, 2018, when activists pulled the statue to the ground. Folt had favored removing the statue over safety and security concerns but was stymied by a state law prohibiting its removal.

As Folt authorized the removal of the statue’s base and commemorative plaques on the day she announced her decision to resign, the BOG and trustees were back at the drawing board over what to do with the statue.

In her statement Monday, Folt reiterated that “the independent panel of safety experts we convened in November to help us review options for the monument that we presented to the UNC [System] Board of Governors made a strong and compelling case for risks to public safety. The fact that despite our best efforts even since then, threats have continued to grow and place our community at serious risk has led me to authorize this action.

“As I have said before, safety concerns alone should preclude the monument from returning to campus. This was also the strong preference of the UNC-Chapel Hill Board of Trustees.”

The police, among many entities that weighed in on the issue, recommended to the chancellor that the statue be housed in a single-purpose, free-standing building where it could be properly secured and where the public could both view it and be subject to control.

The monument, commissioned by the Daughters of the Confederacy, was erected in 1913 “in memory of all University students, living and dead, who served in the Confederacy.” Its presence has made some people and groups unhappy at intervals since the 1950s. The outcry against its continued presence has grown louder in the past 10 years. An organization of students and others called the Real Silent Sam Coalition emerged in about 2011, calling the statue offensive to people of color and at first suggesting UNC erect a reinterpretation plaque to explain it.

Students have said they were insulted by its presence — what they call a symbol of the Confederacy’s loyalty to the institution of slavery — some adding that they didn’t feel safe when counterprotesters came to the campus.

Others see Silent Sam as a tribute to those who fought for their homeland in the Civil War, perhaps without regard to the slavery issue. Many have said that removing the statue would be detrimental to the understanding of history.

Following the NCAA’s decision on the athletics-academics issues, Folt said: “Carolina long ago publicly accepted responsibility for what happened in the past. One of the highest priorities of this administration has been to resolve this issue by following the facts, understanding what occurred and taking every opportunity to make our University stronger.

“I believe we have done everything possible to correct and move beyond the past academic irregularities and have established very robust processes to prevent them from recurring,” and she emphasized that the University instituted some 70 reforms in academic policy and practice as a result of the revelations.

In April 2013, Folt declared she was going public after a 30-year career at tiny, private, prestigious Dartmouth College.

She inherited a fifth-ranked public (which it still is) that was 10th among all American universities in government research funding (it is now fifth), with a student body growing in prestige every year.

She was greeted by a decidedly conservative turn in state leadership, representatives who were determined to change the way its public universities are funded and the criteria on which their degrees are valued. She also would become familiar with the term “under investigation.” Her predecessor, Holden Thorp ’86, once envisioned being in the job for many years but left after five as UNC was rocked by the athletics-academics scandal.

Folt was Dartmouth’s interim president and declined to be a candidate for the permanent job. The Board of Governors elected her after then-system President Thomas Ross ’75 (JD) explained that he had sought a leader who supported the liberal arts, would work to keep tuition low in accordance with the state constitution, was a proven fundraiser and would understand that academics are the first priority but recognize that athletics have an important role in campus life.

Her academic career has been in life science, her research focused on the effects of dietary mercury and arsenic on aquatic life and human health, also conservation of Atlantic salmon and climate change. Ross described her at her hiring as an “internationally recognized environmental scientist.”

She earned her bachelor’s and master’s degrees from UC-Santa Barbara, and her doctorate from UC-Davis. She did postdoctoral work at Michigan State University.

Folt lost the financial support of her parents when she chose an out-of-state school and worked to pay her way through Santa Barbara.

History of the Chancellorship