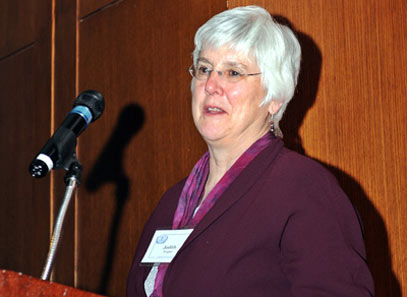 Her commitment to making Carolina a better and fairer place has defined Judith W. Wegner’s more than 25 years of service to the University as faculty leader and former dean of the School of Law. For her work in heightening the school’s engagement with public service, Wegner was honored Friday evening with the General Alumni Association’s Faculty Service Award.

The award was established in 1990 and honors faculty members who have performed outstanding service to the University or the alumni association.

Wegner served as dean of the School of Law from 1989 to 1999, after working as a teacher and legal scholar and an as associate dean for the University. She was the first former dean in more than 40 years to be elected faculty chair, taking over the position in 2003. She has taught and written on the subjects of land use, property law, state and local government law and the rights of disabled persons and has worked on myriad committees.

Wegner, who received her law degree from the University of California at Los Angeles, came to Carolina in 1981. She says she was lured by former Chancellor William Aycock’s commitment to fine teaching and the University’s public dimension.

“He was so committed and so beloved as a teacher,” she said. “I had a sense of possibilities here, and fair-minded people.”

Wegner helped create the University’s Public Service Roundtable and helped establish the UNC Center for Public Service. She chaired the Committee on the Status of Women – putting women’s issues on the map at UNC – and co-chaired Chancellor Paul Hardin’s Committee on Community and Diversity. During her tenure as dean she diversified the law school’s faculty and student body. As chair of the faculty, Wegner addressed faculty retention and graduate student issues and ensured that logo licensing revenues would support merit-based academic scholarships.

“She believes deeply in the public mission of the University,” said Anne Whisnant, director of research, communications and programs for the Office of Faculty Governance. “She has a strong sense of justice and a sense that things can be better than they are. She’s an incredible dynamo about almost anything she takes on.”

Wegner also extended her dedication to public service to the surrounding community. She put in a term as a Carrboro alderman and was president of the Association of American Law Schools. She is a member of the Orange County Planning Board and serves the UNC System as a delegate to the Faculty Assembly. She also helped start the African Law Initiative, an exchange program for students in 16 American law schools and eight law schools in Africa.

More about recipients of the GAA’s Faculty Service Award is available online.