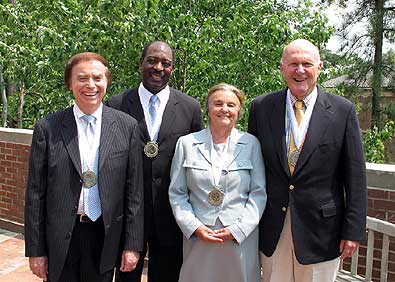 Time and service to Carolina’s welfare were common threads among the recipients of the UNC General Alumni Association’s 2005 Distinguished Service Medals.

When Doris Betts started as a writing lecturer at UNC for one semester in 1966, she didn’t have a college degree, but she’d published two novels and a book of short stories that she’d written as a college sophomore. Betts taught for 35 years and gave much to her students and the University. A chaired professorship was established in her name as the result of the gifts of others. She served as the faculty representative to the GAA Board of Directors and is a recipient of the GAA’s Faculty Service Award.

Betts’ literary renown includes the Guggenheim Fellowship and the medal from the American Academy of Arts and Letters. She kept a hand in public life beyond the University. Among many other things, she has worked to promote literacy and to oppose the death penalty. Her interests are wide and varied, with memberships in UNC’s Order of the Golden Fleece and the Lee County Beekeepers’ Association. She’s been a trustee of several libraries and a director of the First Citizens Bank in Pittsboro.

Dean Richard Cole got his start at Carolina in the 1970s as an associate professor teaching news writing, feature writing and editing. Nine years later, Cole became dean at age 37 and went on to serve longer than any other dean in Carolina’s history. Cole assembled an impressive faculty, including 12 distinguished or chaired professorships. In national rankings, the School of Journalism and Mass Communication is continually listed in the top five. Cole also has led the school to increased international prestige through programs in Eastern Europe, Russia, Mexico, Cuba and Africa.

In the summer of 1992, Cole at 50 became the youngest person to receive the Freedom Forum Medal for Distinguished Accomplishments in Journalism-Mass Communication Administration. The award, given for lifetime achievements, had been given only three times previously. Cole has served as president of several national trade associations, including the Association of Schools of Journalism and Mass Communication, and he served eight years as a vice president of the worldwide International Association for Mass Communication Research. After a sabbatical year, Cole plans to return to the classroom to teach full time.

Four years ago, Julian Robertson Jr. brought a radical idea to life at UNC and Duke University – the Robertson Scholars program. Scholars of this program are transported between each other’s campuses to exchange ideas, gather for cultural events, use each other’s libraries and work together to build academic and social bonds between the campuses.

Robertson is the founder and former head of Tiger Management Corp., one of the biggest and most successful hedge funds. He and his wife, Josie, served on the UNC Board of Visitors and recently built more Carolina ties with Duke by contributing half the endowment for the Nannerl O. Keohane Distinguished Visiting Professorship at the two universities. Robertson has served on the GAA Board of Directors, endowed an MBA fellowship in the business school, served as executive in residence there and has worked on behalf of the National Development Council and the Medical Foundation.

As a boy in Greensboro, Richard Williams earned the nickname “Stick” for being one of the best hitters in sandlot baseball. The name has been with him since – even as a corporate officer of Duke Energy, as chair of Carolina’s Board of Visitors, as chair of the GAA and now as chair of the Board of Trustees.

He came to Carolina on an academic scholarship, but his real plan was to one day earn a living in professional football. He tore up his knee his freshman season and focused on his academic talent – and on the academic opportunity at Carolina he might have let slip past. He studied hard and passed the CPA exam on his first try, and his Carolina degree opened the door to his career with Duke Energy.

The GAA’s Distinguished Service Medals have been awarded since 1978 to alumni and others who have provided outstanding service to the association or the University.