Frank Bruni ’86: "Cherish the highs and find grace in the face of the lows"

Chancellor Kevin Guskiewicz presided over the ceremony that celebrated 3,894 undergraduates, 1,417 master’s students and 846 doctoral and professional students. (UNC/Jon Gardiner ’98)
Posted on May 12, 2022

Nearly 6,200 Tar Heels celebrated their graduation at Spring Commencement on May 8, where keynote speaker Frank Bruni ’86 challenged the class of 2022 to choose happiness and count their blessings. 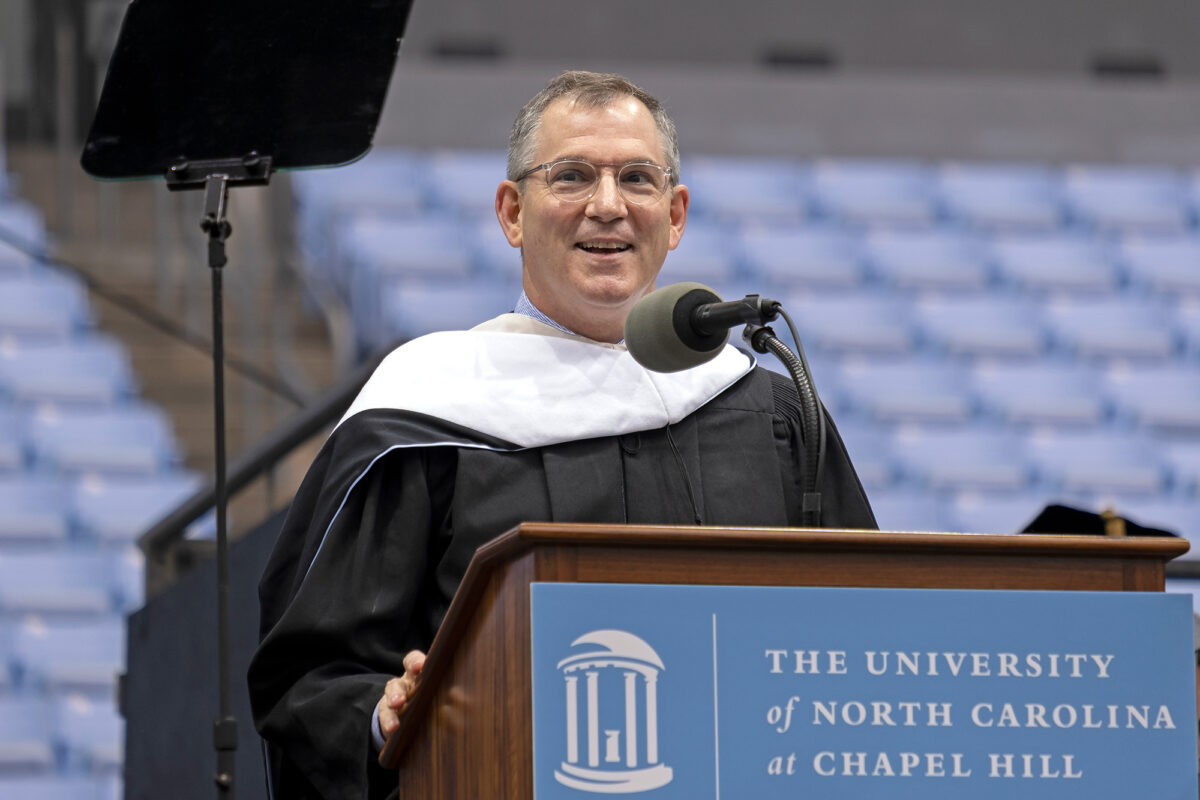 Keynote speaker Frank Bruni ’86 encouraged the graduates to reach high, dream big and coax the best from themselves and the people around them, but he also had a warning. Photo: UNC/Jon Gardiner ’98

“You have many, many important choices ahead of you … but none of those choices will have as much bearing on your decency as a human being and your happiness — your fundamental, enduring happiness — as a choice that you will make monthly, daily, even hourly,” said Bruni, a renowned journalist and bestselling author. “And that’s whether you’re going to be somebody who counts her blessings or somebody who tallies her slights.”

Chancellor Kevin Guskiewicz presided over the ceremony at a chilly Kenan Stadium that celebrated 3,894 undergraduates, 1,417 master’s students and 846 doctoral and professional students.

In his message to the graduates, Guskiewicz drew a parallel between the class of 2022’s journey through the pandemic to the 2021-22 men’s basketball team’s trip to the NCAA National Championship.

“Everyone has moments of doubt and struggle. Everyone has moments when they need to lean on others for support,” Guskiewicz said. “Don’t carry it alone. Speak from your heart and invite others to do the same. All of us are here today by the grace of our own hard work and the generosity of others. It takes both.”

Though the day celebrated the start of a new chapter in their lives outside of Chapel Hill, the graduates will always remain Tar Heels, the chancellor said.

“We want to see you back in Chapel Hill,” Guskiewicz said. “You have earned more days in this magical place than you were able to claim, but you’ve got a lifetime to make up for it.”

Bruni, who began his journalism career at UNC as a Morehead Scholar, English major and student reporter at The Daily Tar Heel, recounted memories from his time at Carolina in his Commencement speech and charged the graduates to appreciate their time in Chapel Hill.

“I can’t tell you how honored I am to be here with you and how moved I am because Carolina has such a special place in my heart,” said Bruni, now the Eugene C. Patterson Professor of the Practice of Journalism and Public Policy at Duke University’s Sanford School of Public Policy. “I spent my own college years here, working past midnight at The Daily Tar Heel, rushing before the exam to finish The Iliad — OK, to skim The Iliad — never quite getting to the pinnacle of Paradise Lost, probably because the chicken biscuits from Time-Out weighed me down.”

After earning a master’s degree in journalism from Columbia University, Bruni worked as a reporter for the New York Post and then the Detroit Free Press, where he covered the first Persian Gulf War and was named a Pulitzer Prize finalist in feature writing. He is best known for his work for The New York Times, where from 1995 to 2021 he wrote as a columnist, White House correspondent and chief restaurant critic. He now contributes opinion pieces and pens a weekly newsletter for the Times.

In 2017, Bruni woke up one morning with blurred vision. Overnight, a stroke had cut off blood to one of his optic nerves, rendering him functionally blind in that eye — forever. Bruni told the graduates about a shift in his perspective that then occurred: The affliction may have affected his ability to see clearly, but it gave him a different kind of clarity.

“My vision improved — not the vision measured by an eye chart — but the more meaningful kind,” said Bruni, whose 2022 memoir The Beauty of Dusk recounted his journey to find optimism. “I saw how rich I was in terms of family and friends. I saw that the clarity of the objects around me had no connection to the sharpness of the ideas in my mind. Yes, it was more difficult to work, but editors still wanted that work. So did readers. That was the relevant reality. My advantages easily outweighed my disadvantages.” 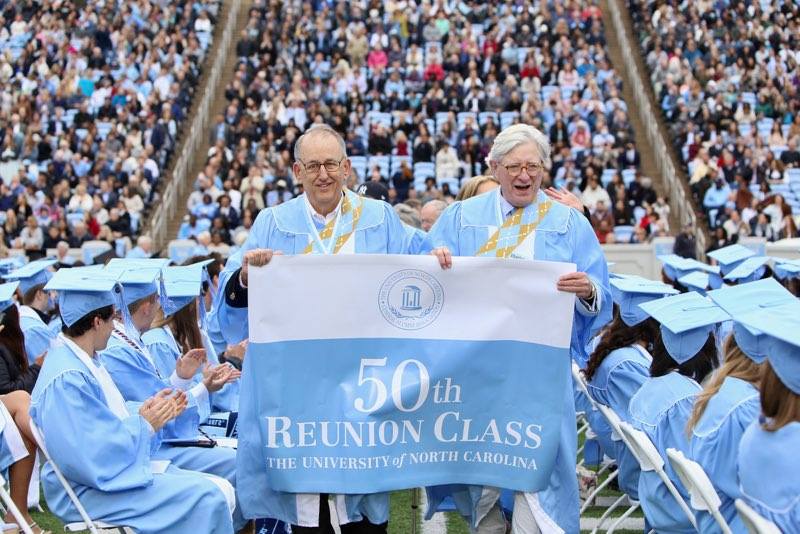 The classes of 1970 and 1972, wearing special sashes designed by Alexander Julian ’70, celebrated their 50th reunions by processing into Kenan Stadium for Commencement.

View photos of alumni of all ages from the 2022 Spring Reunions and Commencement weekend in Chapel Hill.

Bruni aligned his loss of vision with the graduates’ losses during the pandemic but charged them to focus on what they’ve gained during their time at Carolina. He said that the class of 2022 received an exceptional education by learning how to persevere through difficult times.

He encouraged the graduates to reach high, dream big and coax the best from themselves and the people around them, but he also had a warning.

“Some of those dreams will come true. Others won’t,” Bruni said. “That ratio won’t determine the buoyancy of your heart, or your peace of mind, because those aren’t ruled by any arithmetic. They’re governed by attitude, by whether you fully cherish the highs and find grace in the face of the lows.”

• Algenon Lamont Marbley ’76, the first African American to serve as a federal judge on the U.S. District Court for the Southern District of Ohio. Marbley presided over some of the most important cases in central Ohio and the nation, deciding issues ranging from voting rights to policing.

• Millie Ravenel, who, working with then-Gov. James Hunt and his wife, Carolyn, became the founding executive director of the N.C. Center for International Understanding. The center operated as a public service project of the UNC System to demystify other nations and cultures through people-to-people exchanges.

• Eddie Smith Jr. ’65, chairman and CEO of Grady-White Boats Inc., a worldwide builder of outboard-powered sport fishing boats and based in Greenville. Smith, who played football for Carolina, is a past member of the Executive Committee of the UNC Educational Foundation and of the University’s Board of Trustees. The Eddie and Jo Allison Smith Family Foundation has made philanthropic gifts to the Lineberger Cancer Center, School of Medicine, UNC Health Foundation, Kenan-Flagler Business School, College of Arts & Sciences and other schools and programs. 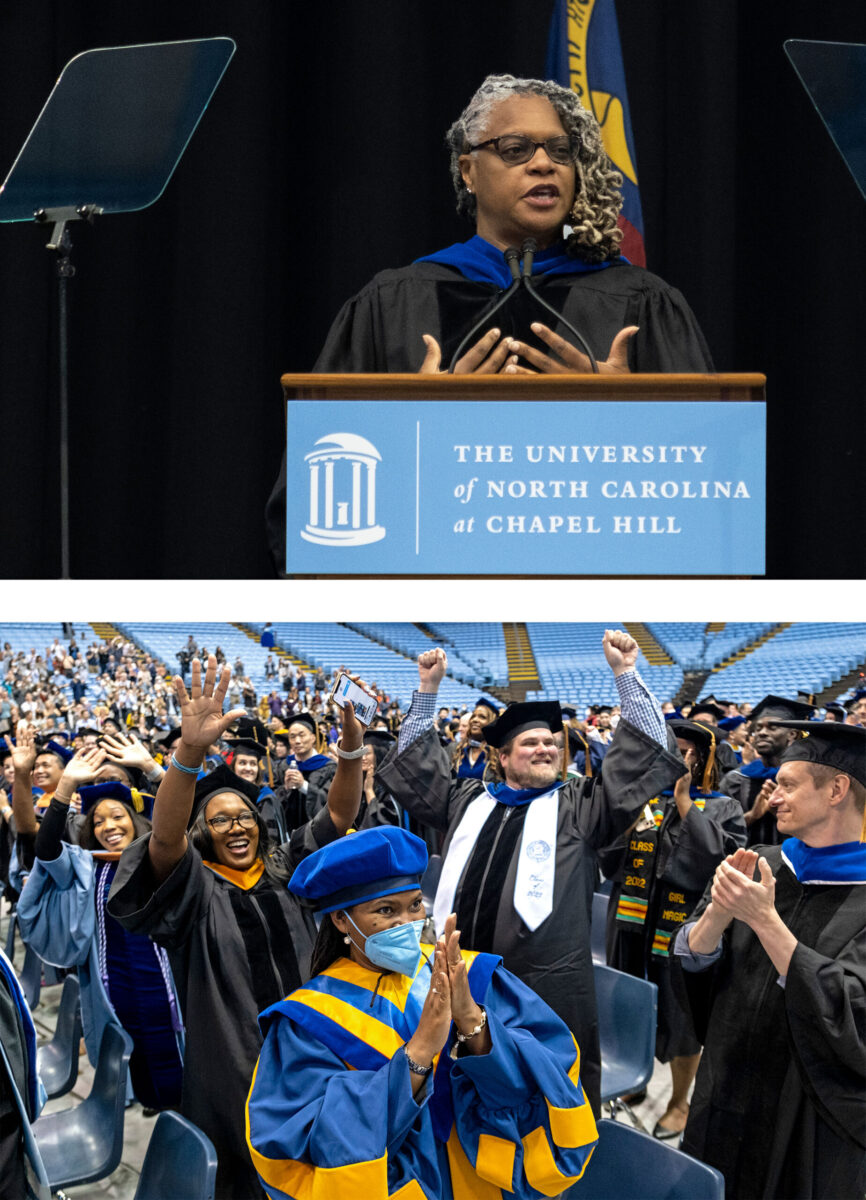 Meredith Evans ’06 (PhD) was the keynote speaker for the doctoral hooding ceremony in the Dean E. Smith Center, where UNC honored more than 500 doctoral graduates.

Evans is an archivist, historian, scholar, and the director of the Jimmy Carter Library and Museum in Atlanta. Her studies at the UNC School of Information and Library Science prepared her for a career of service, which includes work focused on the African American experience in the United States, the documentation of archival records from African American churches in the Atlanta area and the preservation of social media from recent civil rights protests.

“We need different perspectives to strengthen community and democracy,” Evans told the graduates. “Our differences will strengthen us if we focus on our shared humanity and less on the things that divide us.”

Guskiewicz welcomed graduates into the academy. “Everything we do is in service to the people of North Carolina and beyond,” he said. “You have a vital role within that mission — one that comes with special privileges and profound obligations.”