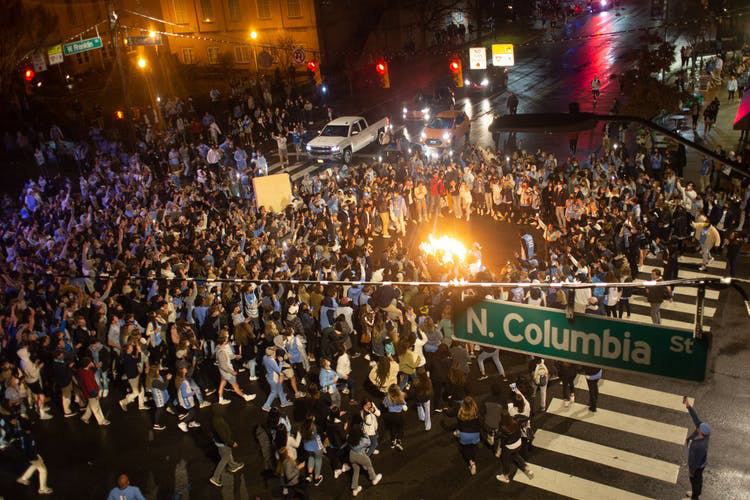 In the moments after the Tar Heels brought to a frantic finish their 91-87 win on Feb. 6, hundreds of people took over the intersection of Franklin and Columbia streets. (Daily Tar Heel photo by Morgan Pirozzi)

For some, as it turns out, the will to practice caution in a deadly pandemic is no match for the decades-old tradition of rushing Franklin Street after a basketball victory over Duke.

In the moments after the Tar Heels brought to a frantic finish their 91-87 win Feb. 6, hundreds of people took over the intersection of Franklin and Columbia streets. According to news reports, the crowd had dispersed by 9 p.m., about an hour after the game ended; in prior years, such celebrations lasted well into the night. Some revelers wore masks; many did not. Police eventually got the streets cleared.

Despite an edict from the town of Chapel Hill on March 1 and pleas from UNC officials prior to the second game with Duke a month after the initial game — “A celebration on Franklin Street will not be allowed if the UNC men’s basketball team beats Duke March 6” — hundreds of people gathered at the Franklin-Columbia intersection shortly after the game’s conclusion at about 8 p.m.

Police dispersed the crowd from the street in about five minutes, The News & Observer reported, but people surged back into the street “a couple more times.” The N&O estimated the March 6 crowd at 500. Photos showed that few of the people in the street were wearing masks.

“We appreciate that the overwhelming majority of our students did the right thing tonight and celebrated safely,” UNC spokesperson Joanne Peters Denny ’03 said. “We’re disappointed in those who did not heed the warnings not to rush Franklin Street and will follow our disciplinary process for any reports we receive of violations of our COVID-19 community standards.”

After the February game, Chancellor Kevin Guskiewicz first addressed the situation on Twitter at 8:50 p.m., about 35 minutes after the game ended: “I know many Tar Heels enjoy rushing Franklin Street to celebrate a big win, but we are in the middle of a global pandemic, and COVID doesn’t take a break for the Duke game. We will investigate this incident and work with local authorities to pursue consequences.”

What was clearly a mass violation of community standards that aim to combat the spread of COVID-19 — and which the University has developed and publicized heavily — came two days before the scheduled start of in-person classes for the spring semester, which already had been delayed three weeks due to a spike in COVID cases.

Guskiewicz and Provost Robert Blouin announced Feb. 7 that faculty scheduled to teach in person could opt to teach remotely until Feb. 17; a University statement said it did not keep track of how many faculty members took that option. Students had “wellness days” scheduled for Feb. 15 and 16, which are part of a reconfiguration of the traditional spring break to respond to the pandemic and are intended as breaks from the semester — not for studying. Faculty were asked to avoid scheduling exams, quizzes and other major assignments on days following these breaks.

Thirty-one percent of undergraduate students are scheduled to take one to two courses in person, in small classes. All students who are scheduled to attend in-person classes are required to be tested for the virus twice weekly.

As of the morning of Feb. 8, Student Conduct had received more than 300 referrals about the first postgame rush. Amy Johnson, vice chancellor for student affairs said in a statement that day: “Every referral is reviewed to assess whether the reported action, if verifiable, represents a violation of the COVID-19 Community Standards. Because of the volume of referrals, we expect the review process to take some time.”

For each reported violation, Student Conduct designated a hearing officer to assess the report, conduct an initial review of the alleged violations and meet with the student to allow for appropriate due process. For students found responsible for violating the standards, consequences could range from a warning, facility access restrictions or loss of campus privileges, removal from housing or disenrollment.

The standards in place in February included required mask wearing, maintaining a physical distance of 6 feet and complying with gathering limits of 10 people indoors and 25 outdoors — along with testing, tracing and quarantine requirements. On March 5, the governor raised gathering limits to 25 indoors and 50 outdoors.

The men’s basketball game against the University of Miami scheduled for Feb. 8 was postponed hours after The Daily Tar Heel posted a video that showed two UNC players partying without masks on, along with other young people who weren’t wearing masks that night after the Feb. 6 UNC-Duke game. Members of the team issued a joint apology on Feb. 9, and Coach Roy Williams ’72 (’73 MAT) said the players were paying “a very significant price” for their actions.

The Feb. 7 statement from Guskiewicz and Blouin began with the words “As you are no doubt aware” and went on to spell out that on the previous night “hundreds of Carolina fans — many, presumably students — flooded Franklin Street to celebrate our men’s basketball victory over Duke. In any other year, this would be a typical, joyous occasion. Of course, this is not a typical year for our community. As we said in the Chancellor’s statement last night, this type of behavior is unsafe during this pandemic and creates health risks for our entire community. At the start of the spring semester, our students agreed to adhere to our COVID-19 Community Standards that include following the state gathering limits, as well as wearing masks and physical distancing, and those standards do not include exceptions for winning basketball games.

“Of course, the timing of Saturday night’s event with the start of in-person classes tomorrow has created some concern among students, faculty and staff, including questions about how we should proceed. Our faculty and students have told us in-person instruction is still the preferred way to teach and learn. Today, we spoke with our infectious disease and public health experts as well as Orange County Health Department officials and they continue to tell us that our campus COVID-19 mitigation tactics make our classrooms among the safest environments. That remains unchanged.”

With only about 3,500 students housed on campus, all in single-occupancy rooms, UNC is faring better than it did last fall, when most students were sent away in the first week of classes.

The University announced on Jan. 13 it had identified a cluster of COVID-19 cases at Carmichael Residence Hall. A cluster is defined by the N.C. Department of Health and Human Services as five or more cases that are deemed to be in close physical proximity in location. Location is defined as a single residential hall or dwelling.

This cluster involved students who lived in Carmichael over winter break and were identified through evaluation testing. Three other clusters have been identified since then: on Jan. 29 in Avery dorm; on Feb. 2 in Morrison dorm; and on Feb. 4 in Connor dorm. Each cluster had five confirmed cases.

Carolina’s current testing program for COVID-19 is more rigorous than last fall’s. All undergraduate students who were planning to live on campus and in Chapel Hill or Carrboro this semester were required to take a test at home prior to arrival as well as regular testing twice a week, even if they are displaying no symptoms.

Testing for graduate students depends on their interactions on campus and the requirements determined by their program. Those coming to campus to teach, learn or work in a lab are required to test regularly, while some are required to use UNC’s Daily Health Checklist to monitor symptoms.

Faculty and staff working on campus are asked to check for symptoms before coming to work each day. Testing is voluntary.