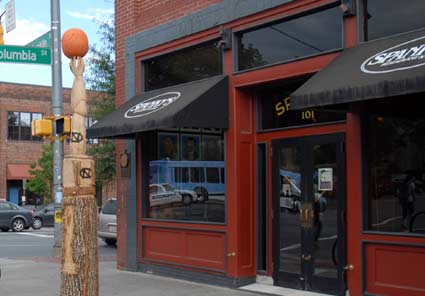 A tree in front of Spanky’s at the corner of Franklin and Columbia streets has become a trophy. (Photo by Regina Oliver ’75)

A tree in front of Spanky’s at the corner of Franklin and Columbia streets has become a trophy.

The town of Chapel Hill topped the tree, already scheduled for removal, after fans celebrating the men’s NCAA basketball championship in April tore off some of its limbs. But the tall stump provided one more chance to celebrate.

So Dwight Bassett, a master wood carver and the town’s economic development director, was brought in to create Chapel Hill’s first public woodwork.

The tribute is temporary, but it might last until the Heels get a chance to defend their title next spring, depending on how the still-live tree trunk holds up.