From Rameses to Rampage 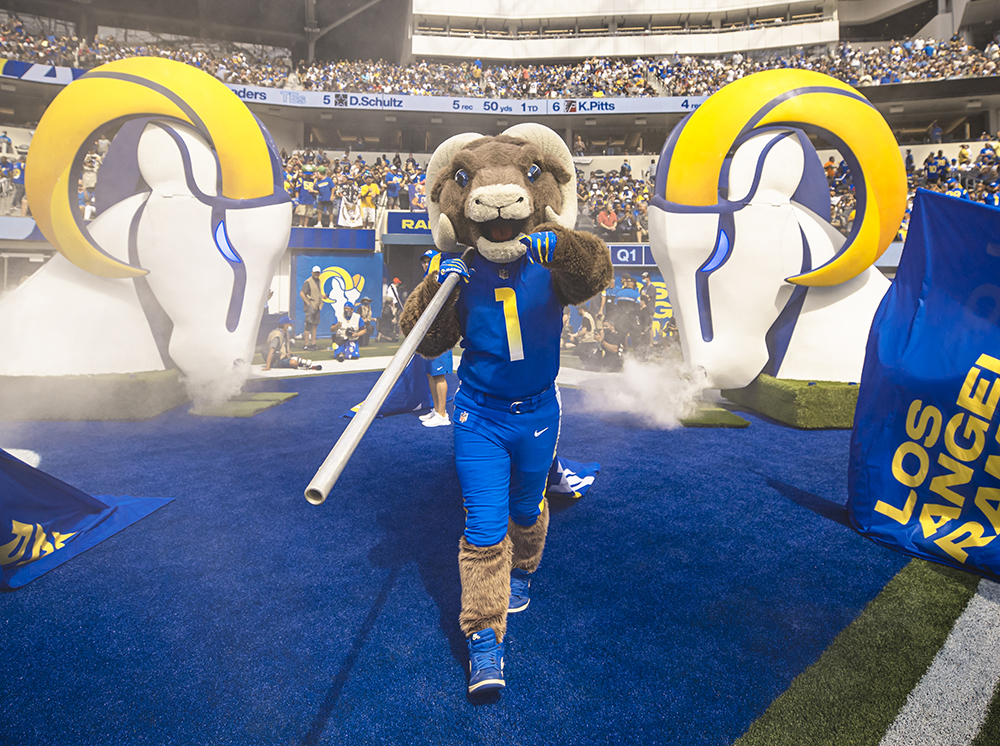 Alex Floch ’17 parlayed his Carolina student gig as Rameses into a job as Rampage, the mascot of the Los Angeles Rams. He said the roles have taught him to be comfortable in his own skin. Photo courtesy of Los Angeles Rams

Alex Floch ’17, like a lot of us, has been putting on a mask during the COVID-19 pandemic. He wears one for safety, but he wears another to bring smiles to strangers’ faces and whip up excitement among tens of thousands of NFL football fans.

Floch is the (shhhh!) secret identity of the Los Angeles Rams’ mascot, Rampage, a role he graduated to after spending much of his college career as UNC’s anthropomorphic Rameses.

The UNC mascot experience was “life changing,” said Floch, who grew up in Winston-Salem. “It taught me to be comfortable in my own skin without the costume on, but it also gave me an opportunity to try new things, meet new people and have opportunities I never thought existed.” 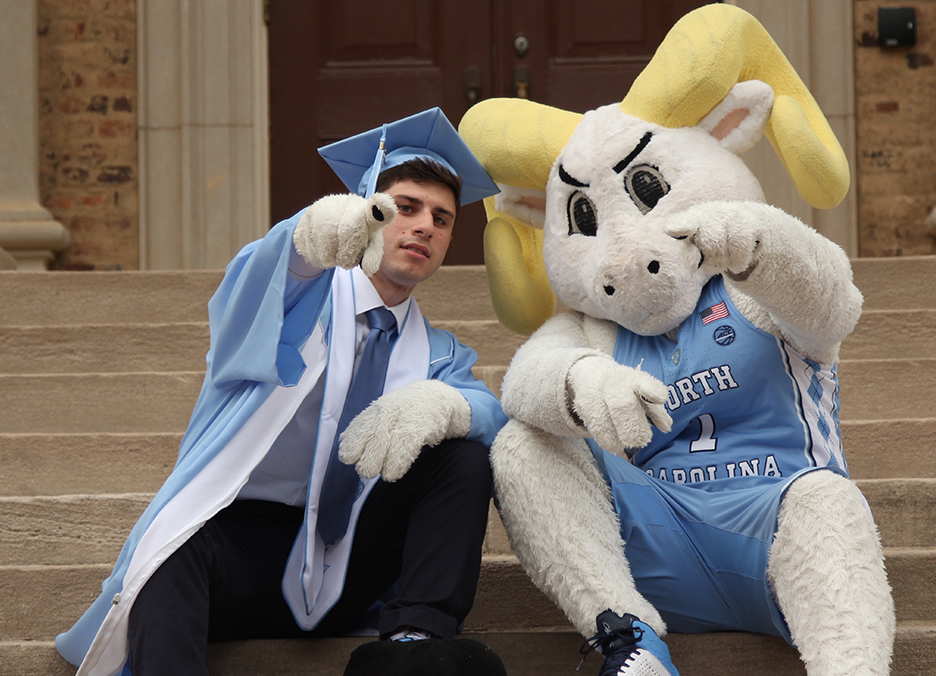 Floch also embraced what he called the “profound” legacy of Jason Ray ’07, a UNC mascot who was hit and killed by a car in 2007 while traveling with the men’s basketball team. Floch recalled meeting Ray’s parents at a fundraiser for UNC’s transplant center, which bears Ray’s name. “There was not a dry eye. I was very emotional, and they were, too,” Floch said. “When they see Rameses, they see their son, as they should.”

The event underscored for Floch how mascots can affect people — in and out of costume — and reminded him of the important lesson to temper expectations. “The best mascots know not every reaction is going to be the best one. Not every kid’s dream is to see a mascot; for some, it’s a nightmare,” Floch said. “My philosophy is, if I can walk away from each event making at least one person smile, I’ve done what I set out to do.”

Floch has hyped crowds and cheered for his teams on two of sports’ biggest stages. As Rameses, he was with the UNC men’s basketball team when it won the NCAA Championship in 2017. Two years later, he was Rampage on the sidelines of Super Bowl LIII, when the Rams lost to the New England Patriots.

And with the Rams winning Super Bowl LVI in February in the team’s $5 billion state-of-the-art SoFi Stadium, Floch now has an NFL championship to pair with an NCAA title.

“The best mascots know not every reaction is going to be the best one. Not every kid’s dream is to see a mascot; for some, it’s a nightmare. My philosophy is, if I can walk away from each event making at least one person smile, I’ve done what I set out to do.”
— Alex Floch ’17

“You feel very fulfilled and gratified that the hard work paid off and culminated into that one very special moment,” Floch said after the Rams victory, although he takes no credit as a title-tilt talisman. “It’s been pretty remarkable to say the least. It’s a mixture of resilience and being in the right place at the right time.”

The Super Bowl scene was in stark contrast to the stadium’s inaugural season in August 2020 when the coronavirus was beginning to spread rapidly. The Rams and crosstown rival Chargers (who rent the stadium for home games) played a surreal, fanless season due to COVID restrictions.

Floch wasn’t on the sidelines for the first half of the 2020 season and was relegated to prowling the stadium’s empty concourse with the cheerleaders and a camera crew. No one approached Floch to give him a high-five or ask for a picture.

As the pandemic worsened in late 2020, Floch and the cheerleaders stopped going to games altogether. Floch found solace, however, helping the community. While fans weren’t inside SoFi Stadium, thousands of cars drove through its parking lots to collect meal kits put together by local Rams partners. 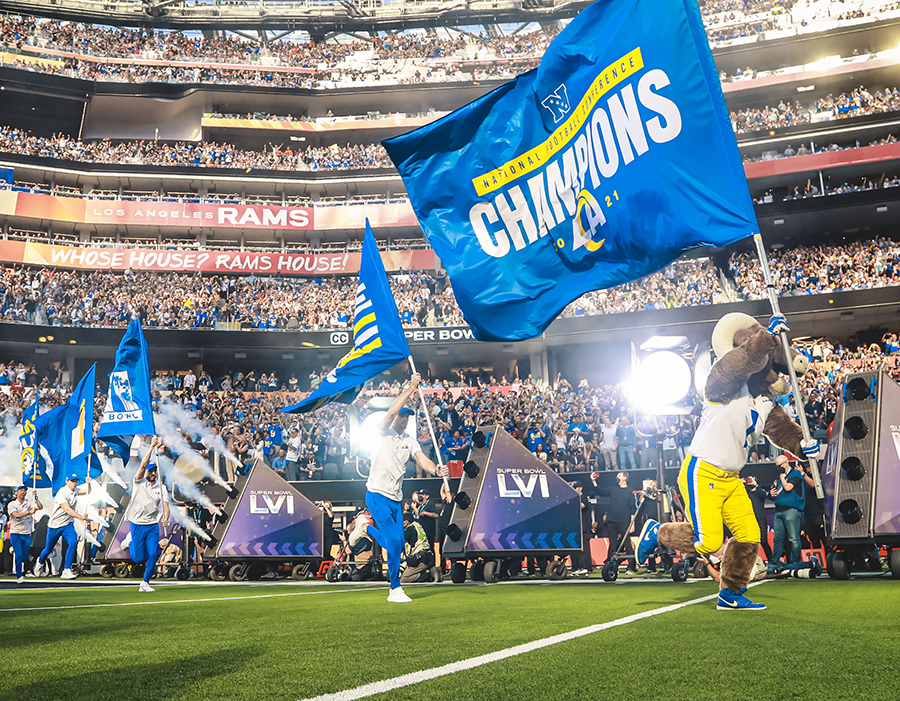 Floch said he felt “fulfilled and gratified” being on the sidelines as Rampage for the Los Angeles Rams’ Super Bowl LVI victory. But he said his involvement in a reading program for under-resourced school districts means more to him than winning a Super Bowl. Photo courtesy of Los Angeles Rams

It was particularly sweet being back on the field for the 2021 season’s Sunday Night Football home opener, a victory over the Chicago Bears, in front of 70,000 fans.

“It was the first game in a while that my legs felt nervous — I had the shakes,” Floch said. “You don’t want to trip and fall when you run the flag out!”

Floch didn’t falter, and he relished the revival. “To see people celebrate with each other and high-five each other, you realize how much you missed not having it,” he said. “It was remarkable to see after such a long time.”

Floch also is spearheading a new team-sponsored program designed to boost children’s literacy, using the recently published book Ride with Rampage. “It takes children on an educational and fun journey around Los Angeles,” said Molly Higgins, Rams vice president of community affairs and engagement. “Alex is now working closely with under-resourced school districts to bring this book to their first to third graders to inspire a love of reading.”

Floch said winning the Super Bowl won’t determine whether he is successful in his job. The reading program “is genuinely going to help people in Los Angeles, especially in low-resourced communities. It will mean more to me down the road than winning a Super Bowl.”