GAA Adds to Scholarship Fund in Honor of Dibbert's Service

General Alumni Association President Doug Dibbert ’70 was honored on the weekend of Spring Reunions and Commencement for his 25 years as president of the association.

Dibbert was surprised in front of a gathering of about 325 alumni and University dignitaries at the annual Alumni Luncheon on May 12. The GAA Board of Directors added $50,000 to the GAA Scholars program, which now will designate one recipient each year as the Douglas S. Dibbert Scholar. 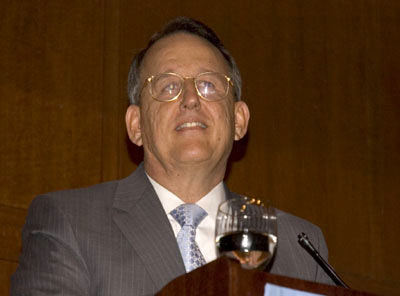 The GAA established the General Alumni Association Scholars program in 2001 with a gift of $500,000. The offer of scholarship aid often tips a student’s college decision toward Carolina.

The Office of Scholarships and Student Aid applies its standards in administering the program and works with the Office of Undergraduate Admissions to attract students who otherwise might choose not to attend because Carolina was unable to award them sufficient scholarship aid.

The scholarships office determines amounts awarded to individuals. Twenty-five students have benefited from the program since fall 2002.

The GAA board’s new chair, Dwight M. Davidson ’77, told the Alumni Luncheon gathering that “Doug Dibbert has devoted himself to the idea that true alumni are in perpetual reunion with Carolina, that she is one of the greatest joys of their lives, and that the nurture of those encounters is as vital as the ‘useful learning’ for which she was chartered.”

In 1982, Dibbert joined a staff of 17 people in Alumni House next to The Carolina Inn. The GAA, established in 1843, then had 25,800 members and held records on 160,000 alumni. His tenure has been marked by growth in the GAA’s offerings to its members, including reunions, Carolina clubs throughout the world, career services, outreach to current students, sponsorship of lectures and other enrichment programs, alumni travel, the bimonthly Carolina Alumni Review, and a voice in University affairs.

In addition to leading the GAA, Dibbert has served as chair of the trustees of its international constituent organization, the Council for Advancement and Support of Education. He also is a former president of the Council of Alumni Association Executives and has served as a member of the Knight Commission on Intercollegiate Athletics.

He was executive assistant to U.S. Sen. Donald Riegle Jr. of Michigan for seven years before coming back to Chapel Hill.

Dibbert’s wife, Debbie, is director of external affairs for the Lineberger Comprehensive Cancer Center at UNC. Their sons, Michael and Brian, graduated from Carolina in 2003 and 2005, respectively.