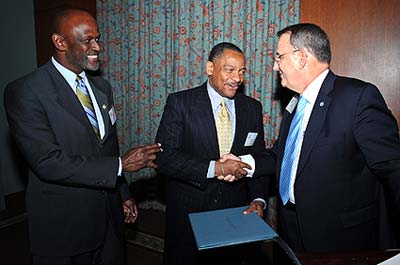 A UNC business school professor who applies his management expertise to alleviating poverty and promoting entrepreneurship in community development was honored Friday with the GAA’s Faculty Service Award.

James H. “Jim” Johnson Jr. is director of the Urban Investment Strategies Center at the Frank Hawkins Kenan Institute of Private Enterprise and is the William R. Kenan Jr. Distinguished professor of strategy and entrepreneurship at the Kenan-Flagler Business School.

The award, established in 1990 and given by the GAA Board of Directors, honors faculty members who have performed outstanding service for the University or the alumni association. Johnson received the award at the GAA board’s quarterly dinner meeting.

His work has included helping disadvantaged youth in Durham, starting the after-school Durham Scholars program to encourage them to graduate and go on to college, and growing it into a kindergarten-through-eighth grade laboratory school, which will open in July. He also has co-authored studies on the economic impact of Hispanics and African-Americans in North Carolina, among numerous other projects.

“I don’t know anyone who works harder as a scholar,” said Richard Krasno, head of the Kenan Charitable Trust that supports the Kenan Institute and has funded much of Johnson’s work. “He is one of the most thoughtful and compassionate scholars I know. His work is disciplined and always with the thought of how to make this world a better place.”

The Kenan Institute created the Urban Investment Strategy Center for Johnson to run. In growing the center, he began working with the Durham public school system, setting up programs for teens in Durham’s roughest neighborhoods, leading midnight basketball games to keep kids occupied during the trouble hours and shepherding students through to high school graduation and for some, on to college.

“He has changed the lives of hundreds of young men and women, enabling them to have a first-rate education,” Krasno said.

“He’s one of our faculty rock stars,” said strategy and entrepreneurship professor Jack Kasarda ’71 (PhD), director of the Kenan Institute, who helped recruit Johnson from UCLA to UNC in 1992.

Before joining the faculty at UCLA, the Falkland native studied geography, earning his bachelor of science degree from N.C. Central University, master of science from the University of Wisconsin at Madison and doctorate from Michigan State University.

While at UCLA, the declining inner city of Los Angeles in the 1980s drew his interest. He researched gang violence and teen pregnancy, ethnic tensions and economic scars, and chronicled the widening gap between inner-city and middle-class residents. He turned a grant for urban policy analysis into a multimillion-dollar center.

Now Johnson is raising $30 million to endow his newly formed Union Independent School. He believes that the greatest gift society can give is a quality education to the next generation of kids who will be the future leaders of the country.

Johnson was the GAA Board of Directors faculty representative for 2004-05.