The secretary of the faculty at the University has been honored with the GAA’s 2011 Faculty Service Award.

Joseph S. Ferrell ’60 also is a professor of public law and government in the School of Government.

The award, established in 1990 and given by the GAA Board of Directors, honors faculty members who have performed outstanding service for the 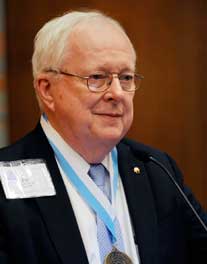 Ferrell, who grew up in the Possum Quarter community near Elizabeth City, joined the faculty in 1964 after earning both his bachelor’s degree in science teaching in 1960 and a law degree in 1963 from UNC. He earned a master’s of law specialty in 1964 from Yale University.

His first appointment was as an assistant professor at what was then the Institute of Government, and that is where he’s made his career, rising through the ranks and being named the Albert Coates Professor of public law and government in 1989. In 2002, the year after the creation of the School of Government, which now is home to the institute, Ferrell accepted a research professorship.

“When I got here, it started the happiest years of my life,” he said. “I never wanted to leave. Fortunately, I never had to.”

Ferrell has served on many other committees — including the SPA (subject to the state personnel act) Employees Grievance Committee — and chaired several, including a task force on administrative processes and a search committee for a campus historic preservation officer.

In 2003, he received both the faculty’s Thomas Jefferson Award, for a faculty member who best exemplifies the ideals and objectives of Thomas Jefferson, and the C. Knox Massey Distinguished Service Award for University employees.

Ferrell’s expertise spans topics including property tax, county government and the N.C. General Assembly. He edited the school’s Daily Bulletin and North Carolina Legislation (the school’s annual summary of acts of the General Assembly) from 1986 to 1996.

Ferrell has been an instructor, consultant and scholar for the General Assembly’s Legislative Research Commission, which included work on a revision of the N.C. Constitution. He was staff counsel to the House and Senate committees on local government.

The General Alumni Association is a self-governed, nonprofit organization serving alumni and friends of UNC since 1843.