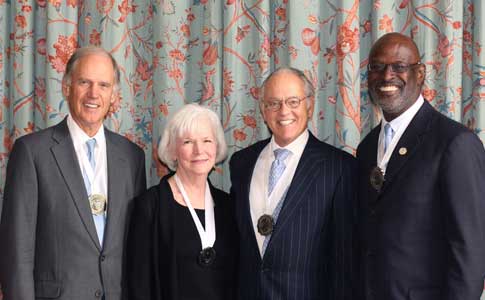 The GAA honored an administrator who oversees financial aid and three alumni on Saturday for outstanding service to the University and to the association.

Recipients of the 2012 Distinguished Service Medals are Shirley Ort, associate provost and director of scholarships and financial aid; John Ellison Jr. ’69, a former member of the Board of Trustees who helped guide UNC’s academic planning; William “Bill” Harrison Jr. ’66, who helped steer the University’s global aspirations; and Randy Jones ’79, former chair of the alumni association.

The medals were awarded at the association’s Annual Alumni Luncheon during Spring Reunion Weekend. The association has awarded the medals since 1978 to Carolina alumni and others.

Ort, of Chapel Hill, administers $220 million in student aid to 15,000 students a year. She led development of the Carolina Covenant financial aid program that enables students from very-low-income families to graduate debt-free, an effort copied by nearly 100 universities. She is a trustee of The College Board and member of the national Commission on Access, Admission and Success in Higher Education. She has developed a national training workshop for young student-aid officers.

Ellison, of Greensboro, is president and CEO of the Ellison Co. Inc., a holding company involved in property management and manufacturing in the U.S. and overseas. He received a bachelor’s degree in history in 1969 and an MBA in 1972 from UNC. He has served on the Board of Visitors (1983-91), including as chair; the Board of Trustees (2003-11); the UNC Investment Board; and the chancellor search committee in 2008. He also has served on the GAA Board of Directors (2000-03).

As a trustee, Ellison served as co-chair with former Student Body President J.J. Raynor ’99 of “Carolina — the Best Place to Teach, Learn and Discover,” which produced a comprehensive report guiding subsequent academic planning. In 2009, he received the Dean’s Award from the Graduate School for his strong advocacy of graduate education.

Harrison, of Greenwich, Conn., former chair and CEO of JPMorgan Chase and Co., received a degree in economics from UNC in 1966 before embarking on his career in investment banking. He has served on UNC’s Board of Visitors (1987-91), the Endowment Fund board and the Kenan-Flagler Business School advisory board. He served on the alumni association board as an international representative (1981-84) and as second vice president (1985-86).

Harrison chaired UNC’s Global Leadership Circle that developed a strategic vision for the University’s international presence. He is the advisory board chair for the Global Research Institute and pledged $1 million to help start the institute and support other international efforts. He and his wife, Anne Stephens Harrison, also a UNC graduate, have funded several scholarships at UNC. He previously received the University’s Davie Award and Distinguished Alumnus Award.

Jones, of Chula Vista, Calif., received a political science degree in 1979 and a law degree in 1982 from UNC. He served in the Navy Judge Advocate General Corps and is an assistant U.S. attorney in San Diego. He received the GAA’s Distinguished Young Alumnus Award in 1998 and served on its board from 2003 to 2010, including as chair.

In 2006, Jones received the association’s Harvey E. Beech Outstanding Alumni Award for support of its Black Alumni Reunion and community leadership. Among his endeavors, he established The Neighborhood Law School in San Diego to educate poor people about their rights and responsibilities. As president of the National Bar Association, he led a delegation to the United Nations International Criminal Tribunal for Rwanda.