Barbara Rimer’s work ethic doesn’t allow for much time to go to the movies. When she does, friends say, she goes to the Chelsea, which has enough light in the back row to allow her... 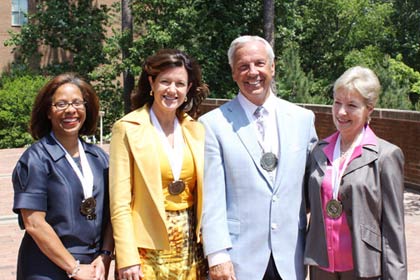 The GAA honored a key administrator and three alumni Saturday for outstanding service to the University and to the association.

Recipients of the 2010 Distinguished Service Medals are Brenda W. Kirby, secretary of the University; Barbara Rosser Hyde ’83, vice chair of the Board of Trustees; Karol V. Mason ’79, former vice chair of the trustees; and Roy A. Williams ’72, men’s head basketball coach.

The medals were awarded at the Annual Alumni Luncheon during Spring Reunion Weekend. The GAA has awarded the medals since 1978 to alumni and others.

Kirby, of Chapel Hill, has worked in the chancellor’s office for three decades, arriving in 1980 with Christopher Fordham ’47 when he was chosen chancellor after serving as medical school dean. She had worked for Fordham and a previous medical school dean and was an aide to campus Air Force ROTC commanders. She also is assistant secretary to the Board of Trustees. In 1996, Kirby received the C. Knox Massey Award, given to University employees to recognize exceptional service.

Hyde, of Memphis, Tenn., began her career in the University’s development office, serving as executive director of the Arts and Sciences Foundation from 1987 to 1992. She co-chaired the Women’s Leadership Council on campus and was on the Carolina First Campaign Steering Committee. She is on the external advisory board for UNC’s Institute for the Arts and Humanities and has been a major supporter of the institute. She is the president of the J.R. Hyde III Family Foundation and director of the J.R. Hyde Sr. Foundation.

Mason, of Washington, D.C., served on the Board of Trustees from 2001 to 2009. Previously, she served on the University’s Board of Visitors and with the Arts and Sciences Foundation, as well as on search committees for chancellor and medical school dean. In 1991, she received the GAA’s Distinguished Young Alumna Award and has been active with the Black Alumni Reunion. The Amityville, N.Y., native was a partner with the Alston & Bird law firm in Atlanta before being appointed deputy associate U.S. attorney general in the Obama administration in 2009.

Williams, of Chapel Hill, who also earned a master’s in teaching from Carolina in 1973, was an assistant coach for Dean Smith and returned to UNC in 2003 after 15 years as head coach at the University of Kansas. He coached UNC teams to national championships in 2005 and 2009 and was inducted into the Naismith Memorial Basketball Hall of Fame in 2007. The Asheville native has been a major supporter of UNC programs, including the Carolina Covenant, which enables students from low-income families to attend UNC without borrowing, the UNC Lineberger Comprehensive Cancer Center and UNC Children’s Hospital. Williams received an Alumni Achievement Award from the School of Education in 2007.