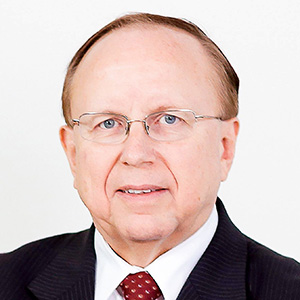 The former N.C. state senator, who earned his juris doctor in 1974 and master’s of public administration degree from Carolina in 1978, served as chair of the UNC Board of Trustees for two of his three terms, chaired the GAA Board of Directors and served as the association’s treasurer for a decade. For years he chaired the Carolina Club board of directors and belonged to the GAA Task Force, which identified areas of significant concern to alumni, and figured out how the GAA could help. Read Stevens’ award citation.

The award was presented at the Annual Legislative Reception at the N.C. Museum of History. The event is hosted by the GAA Tar Heel Network, which has effectively advocated for public higher education and particularly for Carolina.

The Tony Rand and Tom Lambeth Advocacy Award recognizes an individual who has shown extraordinary effort to support public policies that benefit Carolina or the GAA. The GAA Board of Directors voted unanimously to name the advocacy award in honor of the late state Sen. Tony Rand ’61 (’64 LLBJD) and Tom Lambeth ’57  to acknowledge the exceptional contributions they made to Carolina, said Dana Simpson ’96 (’00 JD), GAA counsel and former chair of the GAA Board of Directors.

Rand held multiple leadership roles in the GAA while also serving as the longtime chair of the N.C. Senate Rules Committee and the Senate majority leader. A Democrat, he represented Cumberland County for more than 11 terms. He wrote legislation that provided financing for the George Watts Hill Alumni Center and worked with the Tar Heel Network to secure legislation returning to Carolina the 35 percent of UNC’s overhead receipts that long had been claimed for the General Fund and the UNC System. He was the principal sponsor of legislation that provided funding for The N.C. Cancer Hospital and for creation and funding of the University Cancer Research Fund.

A former chair of the GAA Board of Directors, Rand chaired the Membership Committee, for years was the GAA’s treasurer and chaired the Budget, Finance and Audit Committee. In 1998, he received the GAA’s Distinguished Service Medal and in 1995 the William Richardson Davie Award from the Board of Trustees. Rand died in 2020 at the age of 80.

Lambeth, senior fellow at the Z. Smith Reynolds Foundation, previously chaired the GAA Board of Directors and was a member of the Executive Committee with Rand. In 1992, he received the Distinguished Service Medal and, in 1990, the William Richardson Davie Award. Professorships have been named for Lambeth in the School of Government, School of Law, School of Social Work and the department of public policy in the College of Arts & Sciences. A Distinguished Lecture in Public Policy is also named in his honor. Lambeth chaired UNC’s Board of Trustees and the board of advisers for the School of Social Work. Lambeth has served for over three decades as the chair of the Tar Heel Network.