The Carolina Population Center has received two grants, providing an expected $38.2 million over five years, that together will fund the next phase of the National Longitudinal Study of Adolescent to Adult Health. Now entering...

Trays of tiny vials in hand, Linda Pluta stands in front of a shoulder-height machine, waiting for it to complete an ultraviolet light cleaning cycle. The timer beeps, and a plexiglass display case smoothly rises....

Chemical Soup to Ordered Biology: The Quest for How It Really Happened

About 4 billion years ago, life arose from a primordial soup of chemicals. Somehow, amino acids linked together to form proteins, and from these proteins, the basic molecules of biological life took root, leading ever... 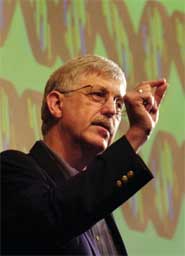 Scientists, staff and other employees at the National Institutes of Health in Bethesda, Md., are hearing a familiar voice back on campus. Francis S. Collins ’77 (MD) was confirmed by the Senate Aug. 7 to return to the nation’s premiere medical research agency, this time as its leader.

Collins, known for his singing and musical talents as well as his scientific achievements, retired last year as director of the NIH’s National Human Genome Research Institute.

The NIH’s 27 institutes and centers employ 18,000 people, most at the headquarters. The agency has a budget of $31 billion this year, about 80 percent of which is distributed to scientists elsewhere.

“The National Institutes of Health stands as a model when it comes to science and research,” President Barack Obama said in making the nomination in July. “My administration is committed to promoting scientific integrity and pioneering scientific research, and I am confident that Dr. Francis Collins will lead the NIH to achieve these goals. Dr. Collins is one of the top scientists in the world, and his groundbreaking work has changed the very ways we consider our health and examine disease.

“With Collins at the helm from 1993 to 2008, the Human Genome Project in April 2003 completed a finished sequence of the human DNA instruction book. In addition to that achievement, Collins’ research laboratory has discovered a number of important genes, including those responsible for cystic fibrosis, neurofibromatosis, Huntington’s disease, a familial endocrine cancer syndrome, adult-onset (type 2) diabetes and Hutchinson-Gilford progeria syndrome.

Collins also is known for his longstanding interest in the interface between science and faith, writing about it in The Language of God: A Scientist Presents Evidence for Belief, which spent weeks on The New York Times best-seller list. His new book, The Language of Life: DNA and the Revolution in Personalized Medicine, about using DNA discoveries to tailor medical care for individual patients, is set to be published in early 2010.

Prior to joining the NIH in 1993, Collins spent nine years on the faculty of the University of Michigan, where he was an investigator of the Howard Hughes Medical Institute. He has been elected to the Institute of Medicine and the National Academy of Sciences. President George W. Bush awarded him the Presidential Medal of Freedom in November 2007.

In presenting the medal for Collins’ scientific achievements, Bush also noted his musical talents, something the NIH Record, the agency’s employee newsletter, spotlighted as well in reporting his nomination to be director.

“On campus he is recognized as an approachable, affable scientist who makes no secret of his love of guitar playing, singing and motorcycle riding,” the newsletter said. “At a going-away ceremony last summer in Natcher Auditorium, Collins was presented with a custom-made Huss & Dalton (luthiers based in his native Staunton) acoustic guitar whose fretboard was inlayed with a DNA helix. If he is confirmed, employees will no doubt get to hear that guitar in concert.”