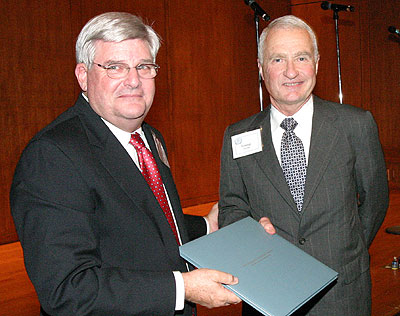 Tom Efird ’61, left, chairman of the GAA’s Board of Directors, presents George Lensing with the association’s 2007 Faculty Service Award. (Photo by Justin Smith)

For his dedication to students and to the University, George Lensing Jr. was recognized Jan. 12 with the GAA’s 2007 Faculty Service Award.

Given annually since 1990, the award recognizes faculty members whose service has had a lasting impact on the University and the GAA.  Lensing, who was drawn to modern poetry in college, earned a doctorate in English and then taught literacy and literature with the Peace Corps in Brazil. In 1969 he accepted a position as assistant professor of English at UNC, a place he’d never seen but quickly grew to love.

“The University has been the heart of my life for the last 30-some years,” Lensing said. The Bowman and Gordon Gray Professor of Teaching at UNC, Lensing is a leading scholar of modern American poetry and an expert on Wallace Stevens, about whom he’s written numerous articles and two books.

Lensing has served the University as director of the English honors program, assistant dean of honors in the College of Arts and Sciences, member of the advisory board of the Campus Y and secretary of the faculty. The more than two dozen committees he has served and, in many cases, chaired, include the central selection committee for the Morehead and Robertson scholarships, the University’s top merit awards, and, since 1974, the the Committee on the Chancellor’s Awards Ceremony for recognizing outstanding undergraduates in academics, leadership and service.

In his role as director of UNC’s Office of Distinguished Scholarships, Lensing is responsible for recruiting and developing student applications for prestigious national scholarships, such as the Rhodes, Truman and Marshall awards-which have been awarded to 12 UNC students since 2003. Lensing has mentored and coached dozens of students each year and tremendously improved UNC’s performance in this arena, says Chuck Lovelace, executive director of the Morehead Foundation. “It’s brought distinction to the University in a way few other things do,” Chuck says. “These are national competitions, so students from the most prestigious universities in the country are going head to head.”

Former English chair Joe Flora notes that despite all Lensing’s administrative posts, he never reduced his teaching load because he didn’t want to lose contact with the students. Lensing remains close to former students and retired faculty members long after their Carolina days. “He’s as caring a human being as you will find,” Flora says. “He’s the colleague you can absolutely trust.”

Lensing was chosen to give the December commencement address in 2004 and the prestigious E. Maynard Adams Lecture last fall. Former UNC men’s basketball coach Dean Smith asked Lensing to talk with his players each year during a break in practice.

The Order of the Golden Fleece, a campus honorary society, presented Lensing with a Chiron Award for his service to the order, for which he has been a faculty sponsor since 1979. Lensing has received two University honors for undergraduate teaching excellence: the Tanner Award in 1984 and the Sanders Award in 2001.