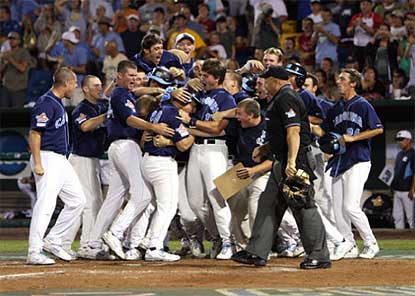 Carolina was the only team in the College World Series  that hadn’t recorded a home run.

“Was” is the key word as junior catcher Tim Federowicz blasted a grand slam home run in the ninth inning to break a tie with Louisiana State University and give the Tar Heels a 7-3 victory Friday night as they escaped series elimination in Omaha, Neb.

“My team has got a lot of heart. We just hung in there,” UNC coach Mike Fox ’78 said.  “They [LSU] didn’t make many mistakes on the mound, but we finally hit a mistake. Timmy put a good swing on it, and we’re happy to still be playing.”

The win eliminates the Tigers and moves UNC, now 53-13, to a Saturday night rematch with Fresno State, which defeated the Heels 5-3 Tuesday. To reach a best-of-three series finals, the Heels will need to defeat Fresno State twice.

The game against LSU might have seemed like two games, as it was halted due to lightning and rain Thursday with the Heels up 2-0 in the first inning. On Friday night in the third inning, the game was delayed almost an hour and a half due to lightning.

Everything was going UNC’s way to start the game Thursday night as sophomore Tim Fedroff doubled in sophomore Dustin Ackley to give the Heels a quick 1-0 lead.

UNC loaded the bases with only one out and scored to make it 2-0 when senior Chad Flack walked.

The bases were still loaded with one out when the game was delayed and eventually postponed until Friday. LSU pitcher Blake Martin was in trouble early, so faced with elimination and with the bases loaded, the Tigers put their ace, Jared Bradford, on the mound Friday night.

Momentum was a key part of the game and momentum switched from Carolina to LSU as soon as the game continued Friday night. Bradford, a sinkerball pitcher, got junior Garrett Gore to ground into a double play to end the threat.

UNC freshman starter Matt Harvey, who hadn’t pitched in a game in 21 days, got a bit wild in the second inning, throwing seven straight balls and walking two batters. LSU’s D.J. LaMahieu singled up the middle to drive in a run, making it 2-1. A double play ended any further scoring.

After the delay, Harvey was replaced by redshirt freshman Colin Bates, who got into trouble with runners on first and second with only one out in the third. Another double play – this one a fly out to senior left fielder Kyle Shelton, who doubled the runner off second – ended another threat.

Carolina extended the lead to 3-1 in the fifth on a ground ball fielder’s choice by Federowicz, which scored sophomore Ryan Graepel, who had walked to lead off the inning.

But LSU, which has come from behind in 19 of its last 26 wins, rallied in the sixth as UNC sophomore lefty Brian Moran gave up a 400-foot, two-run homer to Matt Clark, who is the nation’s home run leader with 28.

With one out, Graepel rapped a double in the gap between right and center.

“We got him in the lineup for defense late in the season,” Fox said, “but that double was a big one for us.”

Federowicz, who was hitless in his last 13 at-bats with men in scoring position, got hold of an inside breaking pitch and deposited the ball into the left field bleachers for a grand slam, making it 7-3.

“It was a great feeling getting up there in the College World Series with the bases loaded and a chance to put us ahead,” said Federowicz, who noted that LSU pitcher Louis Coleman had been tough on righties. “I had struck out bad before. I knew he was going to bring that slider and I caught a bad one.”

UNC’s ace starting sophomore pitcher Alex White, who came on in relief in the eighth, picked up the win to go to 12-3 on the season. Yet another double play ended the game and the season for LSU, which finished the year at 49-19-1. It was Coleman’s first loss of the season as he fell to 8-1.

“I think tonight you saw why we lead the nation in earned-run average,”  Fox said. “We ran our five best guys out there. It would have been a shame if we had lost giving up only four hits, but sometimes that’s the nature of the game.”

Carolina put together nine hits during the game, including those four by Ackley, who scored twice. Ackley now has an 11-game hitting streak and is batting .500 in the tournament.

“We think Dustin Ackley is the best player in America,” Fox said of his leadoff hitter. “He’s a special player that makes us go.”

Ackley had perhaps his weakest game of the tournament in the loss to Fresno State as he got one hit in five at-bats and failed to score or drive in a run. The Tar Heels will need him to get on base against a rested Bulldog team.

Fresno State, 2-0 in the double-elimination tournament, has not played since Wednesday’s game against Carolina. The game starts just after 7 p.m. EDT Saturday. Should the Tar Heels win, the two teams will play again Sunday night for the right to go the finals against either Stanford or Georgia.