Hargrove Becomes Chair of Board of Trustees 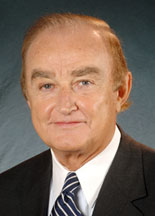 Wade H. Hargrove ’62 of Raleigh was elected chair of the UNC Board of Trustees on Wednesday. Hargrove, a corporate and national media lawyer and partner with Brooks, Pierce, McLendon, Humphrey & Leonard LLP, was appointed to the 13-member board in 2009.

Also taking the oath of office as new members were W. Lowry Caudill ’79 of Durham, co-founder of Magellan Laboratories and retired president of Pharmaceutical Development for Cardinal Health; and Steven J. Lerner ’80 of Chapel Hill, founder and chair of the board of directors of both Capstrat and FGI and managing partner of the Blue Hill Group. Caudill was appointed by the 17-campus UNC system’s Board of Governors. Lerner was appointed by Gov. Beverly Perdue, who will make a second appointment to the board at a later date. Mary Cooper, a senior from Nashville, Tenn., was sworn in as a new trustee May 25 to fill the ex-officio seat held by the student body president.

As a student at UNC, Hargrove was a Jefferson Standard Foundation and Alumni Scholar. He was active in student government and was initiated into the Order of the Golden Fleece. He earned his bachelor’s degree with honors in radio, television and motion pictures, and a UNC law degree three years later. A former member of the Board of Visitors and the School of Journalism and Mass Communications Board of Visitors, Hargrove served on the advisory committee of the Center for Media Law and Policy and the General Alumni Association Board of Directors. For the School of Law, he served as alumni association president.

Caudill earned a bachelor’s degree in chemistry and a doctorate in analytical chemistry at Indiana University in 1983. He returned to North Carolina as one of the two scientists who created Magellan Laboratories, a pharmaceutical development company based in Research Triangle Park. An active entrepreneur and supporter of entrepreneurial endeavors, Caudill is chair of the Chancellor’s Innovation Circle. He is an adjunct professor of chemistry at UNC and a member of the executive board of the Education Foundation Inc. The new building for analytical chemistry dedicated in 2007 bears the name of Caudill and his wife, Susan S. Caudill ’80.

Lerner earned a master’s degree in 1980 and a doctorate in 1983, both in sociology, from the University. He was an adjunct professor and taught in the Kenan-Flagler Business School in the 1980s and 1990s. For the past 30 years he has been involved in the formation of numerous companies. He is currently vice chair of Piedmont Community Bank Holding’s Board of Directors. He also is a partner and adviser with LaunchBox Digital and previously held positions as chair of Yankelovich Partners and KBM and vice chair of Sterling Cellular. Lerner is a member of President Obama’s White House Council for Community Solutions, which provides advice on the best ways to mobilize citizens, nonprofits, businesses and government to work more effectively together to solve specific community needs.