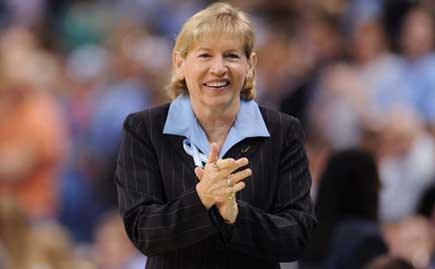 UNC women’s basketball head coach Sylvia Hatchell is temporarily stepping away from her on-the-court coaching responsibilities due to a recent diagnosis of leukemia.

“I am going to be involved in a treatment plan established by Dr. Pete Voorhees, medical oncologist, and his team from the UNC Lineberger Comprehensive Cancer Center,” Hatchell said in mid-October. “I have the utmost confidence in my doctors. There is a reason,” she added, why Lineberger ranks as one of the top cancer centers in the nation.

“I will remain very much involved with my team and day-to-day operations here at UNC and expect to return to my sideline responsibilities as soon as possible. My veteran staff and team will be well prepared and meet any challenges until my return. Don’t forget I am a Tar Heel woman!”

Last month, Hatchell was inducted into the Naismith Memorial Basketball Hall of Fame in Springfield, Mass. The 2013-14 season is Hatchell’s 39th as a collegiate head coach and her 28th with the Tar Heels. She has an overall record of 908-321, making her one of only three head coaches in women’s basketball to win 900 games. Hatchell currently stands second in all-time wins with 908 and is first among active coaches.

She has led the Tar Heels to a 636-241 mark, won AIAW, NAIA and NCAA national championships, including the 1994 NCAA title with UNC, and claimed eight ACC Tournament titles.

“Sylvia has our complete support and is in our thoughts and prayers for a full recovery,” said Director of Athletics Bubba Cunningham. “Sylvia is a fighter, and her enduring spirit will aid her greatly. Her staff and players, family and members of the athletics and University community will do what we can to bolster those efforts. Sylvia has been a longtime supporter of the Lineberger Center and is in the best hands possible.”

“Sylvia remains strong and in good spirits,” said Voorhees, an associate professor in the division of hematology and oncology in UNC’s department of medicine. “She is physically and mentally tough, and this will serve her well on her journey. We are optimistic that she will do well.”

Dr. Shelley Earp, Lineberger’s director, said: “Coach Hatchell has been a tireless ambassador for our cancer center for the last 15 years. She has helped us in countless ways. Now it is our turn to be there for her with the best care and our team’s full support.”

Associate head coach Andrew Calder will direct the team during Hatchell’s absence. Calder is also in his 28th season with the Tar Heels. He’s been a part of six 30-win seasons and three Final Fours, including the national championship in 1994.

Billy Lee, UNC’s director of video and scouting and special assistant to the head coach, will temporarily be added to the coaching staff so that the Tar Heels may have a full number of coaches on the court at practice. Lee was the men’s head coach at Campbell for 18 seasons. He is in his third year at Carolina.