The Process Is the Punishment

The jury trial is a staple of American culture, from Norman Rockwell paintings and 12...

An Astronaut for the Information Age

Francesca Tripodi’s research often begins with the question, “Why?” Why, she wondered, were fewer than...

The Politics of Goosebumps: Matt Andrews ’08 Serves History of Sports

Standing in front of a classroom, history professor Matt Andrews ’08 (PhD) has a keen...

Helping Teachers Drink It All In 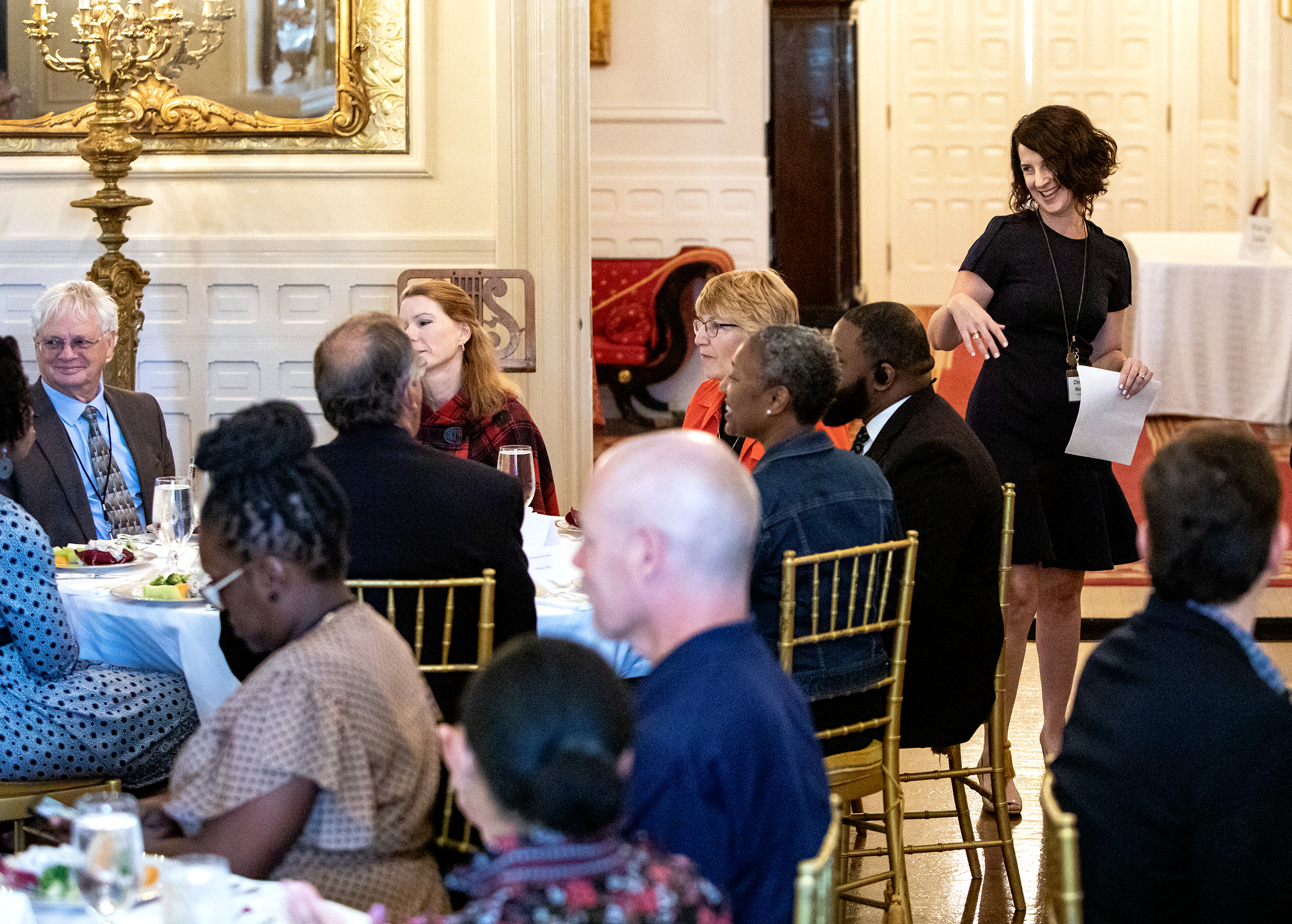 Lunch at the Governor’s Mansion? Teachers are worth it, Christie Norris believes. So that’s just where her Carolina K12 program took them in October. (Photo by Ben McKeown)

That’s one of the many tenets of teacher appreciation that Christie Norris preaches at Carolina K12, which has quietly made UNC a presence in school classrooms across the state. Norris and her colleagues at Carolina Public Humanities reach hundreds of teachers each semester with dayslong workshops that look nothing like the drab, fluorescent-lit lectures that educators have come to expect. Carolina K12 events feel more like company retreats but with a lot more art and music. 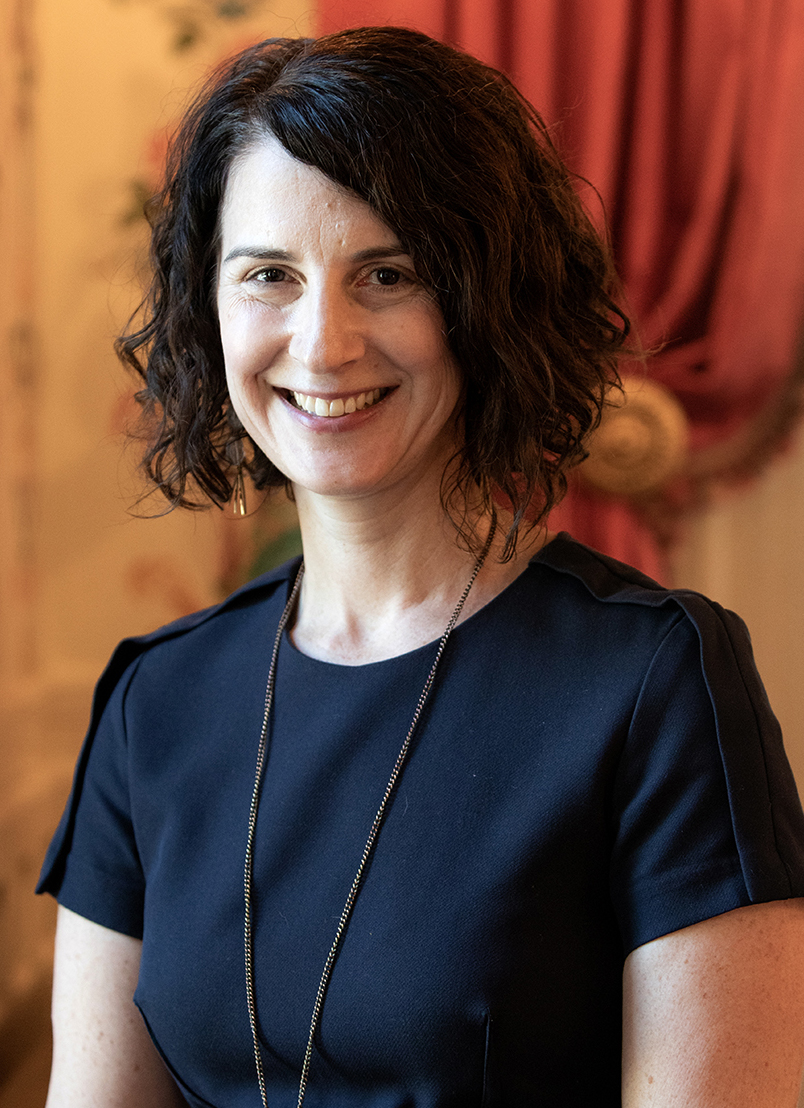 “Love and success are in the details, and we want teachers to feel that support and appreciation,” Norris said. “We bring them to beautiful spaces; we pay their travel costs; we feed them well. We want them to feel like scholars.”

And scholars get wine, at least at dinner time. “They know that corporate America gets that kind of nice dinner and reception all the time,” Norris said. “I want teachers to feel like the honored professionals they actually are but don’t often get treated like.”

She also wants them to recognize the enormous resources UNC makes available, especially in the humanities. Carolina K12 maintains a database of hundreds of lesson plans tailored to the state’s public school curriculum, many of them drawn directly from UNC professors or relying on UNC projects, including the Southern Oral History Program.

“Public education is a major component of what we can do to enhance the engagement with the humanities around the state of North Carolina,” said Lloyd Kramer*, professor of history and the energetic faculty chair of Carolina Public Humanities. “One of the key issues is how you help teachers when they’re addressing the most sensitive and difficult subjects to come up in the classroom. Topics around Reconstruction, Jim Crow, civil rights — areas where some creativity can really help people engage with a difficult topic.”

Norris knows how valuable that extra guidance can be. Before coming to UNC 13 years ago, she taught eighth grade history, covering North Carolina’s past from the pre-Colonial era to the present day. “I absolutely loved it. But my first year teaching, I left school every day feeling like I’d been dragged behind a bus. It got better, mostly because I got better.”

Too many North Carolina teachers don’t stick around long enough to see that improvement. Early career teachers have the highest attrition rates, with more than 12 percent leaving their jobs in 2017–18. That contributes to a near-constant recruiting problem and leaves many students with inexperienced teachers.

Professional isolation plays a role. Teachers go through the same material, year after year, often with little opportunity to continue growing or connect with colleagues in their discipline. The state’s budget for professional development was zeroed out during the Great Recession, which began in December 2007, leaving individual districts and schools to scrounge funding on their own. 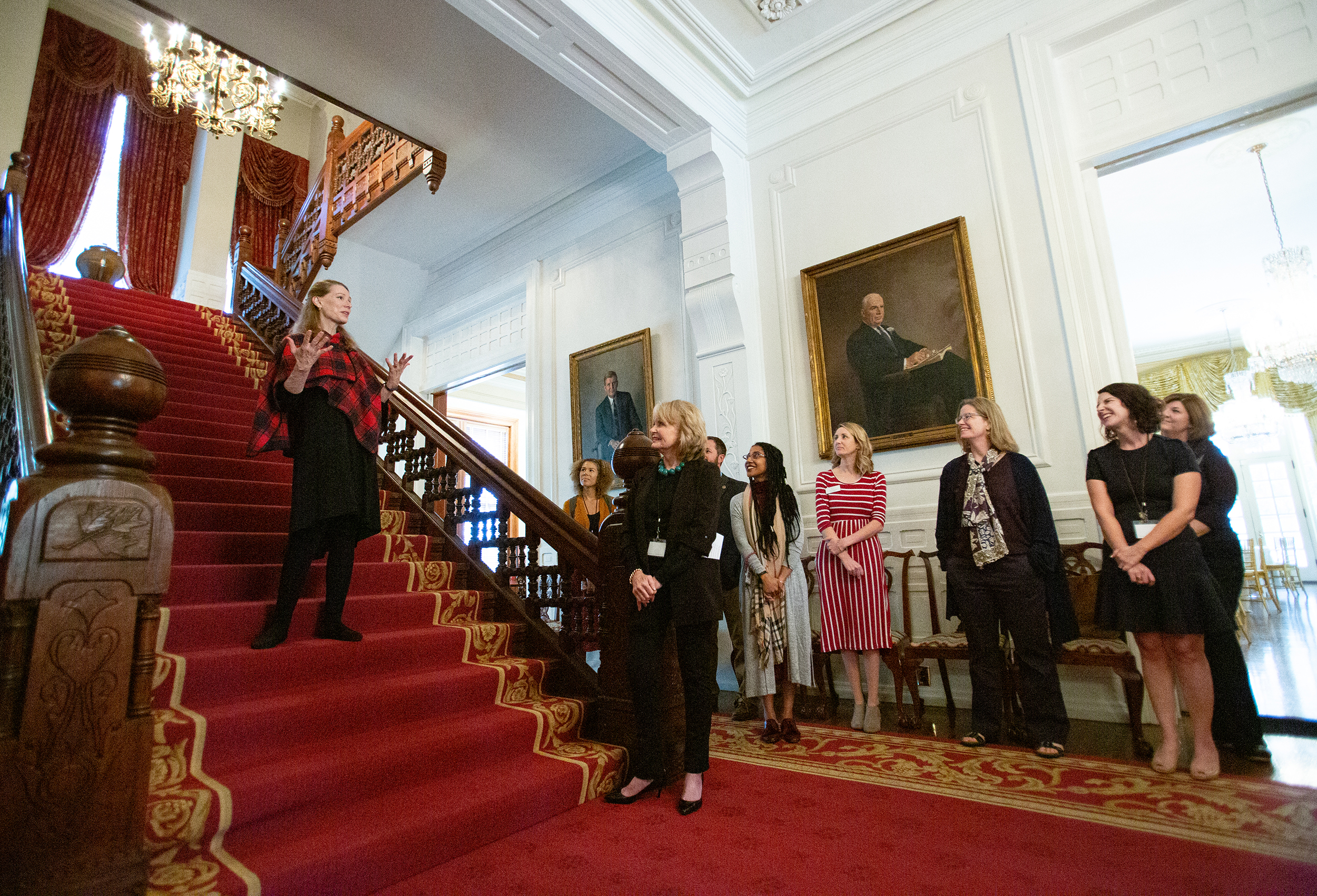 Norris’ clients were welcomed by First Lady Kristin Cooper. “We bring them to beautiful spaces,” Norris says. “We want them to feel like scholars.” (Photo by Ben McKeown)

“You can go whole weeks surrounded by people but not really having a conversation with another adult,” Norris said. “It’s hard to feel like a scholar in that environment. I think what we really try to do is connect teachers with one another and with a broader academic community.”

She keeps Carolina K12 events small; most of them stretch over two days. That gives participants time to get to know each other and lets them have real conversations with the visiting professors instead of only seeing them on a stage. Norris hates the “sit-and-get” model of professional development, so there’s a lot of audience participation.

“You have to be a little bit crazy to be a great teacher — a good kind of crazy.”

“You have to be a little bit crazy to be a great teacher — a good kind of crazy.”

The good kind of crazy shows up in Norris’ theatrical approach to commanding a room. She’ll often lead off the day by having teachers recite a mantra of self-worth — “I am a professional; I am a scholar!” And her programs mix academic discussions with artistic performances. A summer workshop in Goldsboro featured the N.C. Central University historian Freddie Parker ’87 (PhD) sharing his research on runaway slaves, followed by a performance of spirituals and gospel music by UNC’s Mary Williams ’16 (’19 MA). Teachers received an art history lesson from the Ackland Art Museum’s Jenny Marvel and built their own paper collages.

Norris’ program is part of UNC’s College of Arts and Sciences, but Carolina K12 gets no public money. Its entire operating budget — slightly over $300,000 — comes from private funds. The North Caroliniana Society, with a mission to promote North Carolina history and literature, has become a major backer. And Norris’ summer program in Goldsboro was supported by local donors in Wayne County.

“We hope that can become more of a model,” Kramer said. “There are a lot of people in the state who are concerned about the decline of opportunities for public school teachers, and this is a way for them to do something with immediate impact.”

Norris knows her program is small and the need in North Carolina is great. Her waiting lists run into the hundreds, and she’s a long way from having the sustained follow-up that would help teachers when they return to the classroom.

But it makes a difference for UNC to show up in these communities, and Norris has the testimonials to prove it. “I was almost moved to tears several times with the way we were appreciated, not just with words but with action,” wrote Hallie Evans, a Wayne County elementary school teacher who attended the summer workshop. “It is so nice to be reminded that I am, in fact, a professional and not a robot.”

*History Professor Lloyd Kramer is the recipient of numerous awards, including the GAA’s Faculty Service Award in 2018. He represented the faculty on the GAA’s Board of Directors in 2008–09.