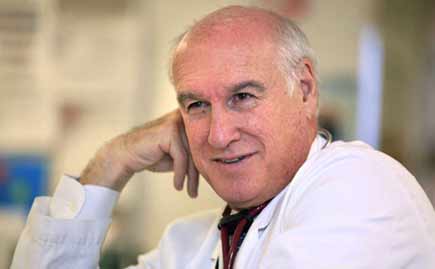 Dr. Myron S. Cohen, UNC physician and scientist who has been internationally recognized for his work studying the transmission and prevention of HIV/AIDS, has been chosen to receive the 2013 North Carolina Award for Science.

The award is among the state’s highest civilian honors. Since 1964, awards have been given annually in four categories: fine arts, literature, public service and science. Previous recipients include poet Maya Angelou; the late Charles Kuralt ’55 and Charlie Rose, both journalists; and Oliver Smithies, an Excellence Professor of pathology and laboratory medicine at UNC who was awarded the Nobel Prize in physiology or medicine in 2010.

Cohen, who is Yeargen-Bate Eminent Professor of medicine, microbiology and immunology, and epidemiology, arrived at UNC’s School of Medicine in 1980, just as AIDS was first identified. He and his multidisciplinary team of researchers developed sensitive tests to measure the concentration of HIV in bodily fluids and were among the first to demonstrate that other sexually transmitted infections can increase the likelihood of HIV transmission.

Cohen also directs the Institute for Global Health & Infectious Diseases at UNC. He is the architect and principal investigator of the multinational clinical trial, HIV Prevention Trials Network (HPTN) 052. The study showed that early treatment of HIV infection with antiretroviral therapy prevents sexual transmission of the virus by at least 96 percent. This work was recognized by Science magazine in 2011 as the Breakthrough of the Year and has inspired hope for an AIDS-free generation.

This year’s other recipients are John E. Cram of Asheville, for fine arts; John M. H. Hart Jr. ’93 of Keswick, Va., for literature; and Phillip J. Kirk Jr. of Raleigh, John Harding Lucas of Durham and Walt Wolfram of Cary, all for public service. The awards are administered by the N.C. Department of Cultural Resources.