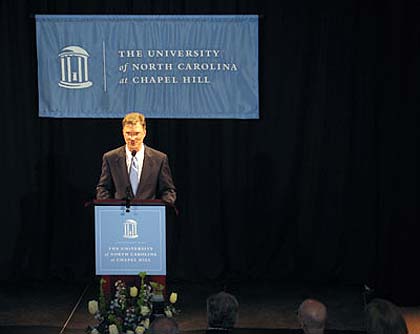 Holden Thorp ’86, a popular teacher whose intellect, charisma and leadership abilities were spotted very early in his career, will be UNC’s 10th chancellor. The Kenan Professor of chemistry rose at Carolina about as fast as he could move his books from office to office: After going west to get his doctorate, he returned to Chapel Hill in 1993 as an assistant professor, was named director of the Morehead Planetarium and Science Center in 2001, and went back to chemistry as department chair in 2005.

He has been dean of the College of Arts and Sciences, the University’s largest academic unit, since last July. The product of a search that kept its secret until the last minute, he will take over July 1 from James Moeser, who leaves office June 30. After a year’s research leave, Moeser plans to return, as he has said, “with the most exalted title this University can confer on an individual – professor.”

Thorp is not UNC’s youngest chancellor ever, but at 43 he is the youngest since William Aycock ’37 (MA) was sworn in in 1957. His selection bucks a trend toward older administrators. For the past 42 years, most of UNC chancellors have been in their 50s when named – Michael Hooker ’69 was 49, and Moeser was 61.

Thorp met the raucous applause in the UNC System Board of Governors meeting Thursday, and later at a campus reception, with the deadpan expression and dry humor with which acquaintances are familiar.

“Wow,” he said when introduced to the board. “Wow,” he repeated for some 600 people who jammed Gerrard Hall. He said UNC System President Erskine Bowles ’67 offered him the job while gassing up the car in Greensboro after a visit to BOG Chair Jim Phillips ’79. “I guess it’s a good thing I didn’t run in to get some Nabs,” Thorp said.

He said he wants Carolina to be the kind of place where people with great ideas take risks, “instead of merely adding increments to what we know,” and he acknowledged that risk-taking is getting tougher as government funding for research becomes more scarce. He said the challenges facing the University are the world’s challenges and ones that Carolina’s people can be in a position to help solve.

“Our to-do list is nothing less than the greatest problems of our times,” he said. He listed finding cures for diseases and getting them to everyone who needs them, finding and inventing clean energy, inspiring students in the public schools, and feeding the world’s hungry.

Thorp told his first audience that Carolina was a light on the hill. “Let it shine,” he repeated three times. His second speech of the day concluded with, “Hark the sound.”

The search committee, formed last fall after Moeser announced his plans to step down, received more than 100 applications, interviewed about 20 people and gave Bowles the names of four finalists. Bowles declined to identify the other finalists, saying, “They all have jobs.” He added that “it was a selection process much more than a recruiting process” and that Thorp “had the whole package.” The committee hired R. William Funk and Associates, a nationally known education search firm.

Thirty-one percent of the candidates were women and minorities, said Nelson Schwab ’67, the UNC trustee who chaired the committee. “So many people were trying to get this job,” he said.

Thorp was a unanimous choice of the UNC trustees and received a unanimous vote of the Board of Governors members in attendance Thursday.

Carolina’s first chancellor, Robert Burton House ’16, was renowned for playing the harmonica. Thorp plays in a jazz/blues band. He used to use a potato gun made of PVC pipe to explain the principle of exothermic reactions to his students, and he starred in his own videos to relate other intricacies of chemistry.

When he was 31, Thorp put his research in nucleic acids to practice in the marketplace, starting, with his brother Clay Thorp ’90, a company called Xanthon to develop processes to simplify the detection of the presence of nucleic acids in living cells. The goal was to streamline the process of developing therapeutic drugs.

Aware that his work was too complicated to explain to most people, Thorp tried to make them comfortable with a simple line or two that hinted at his dry humor. “We learn new properties of DNA that you could not explain to lay people very easily, and we write these up in scientific journals, so that later some other person can use this information to do some other wild thing that we couldn’t possibly think of now.”

Xanthon did not make it. Starting with plans for an 80,000-square-foot building and 100 employees, its product rollout encountered technical problems, and by 2002 it was shut down.

He has been adviser, co-founder or consultant with many small companies, including Novalon Pharmaceuticals, MaxCyte, Osmetech, OhmX and Plextronics. In 2005, Thorp co-founded Viamet Pharmaceuticals Inc., a biotechnology company targeting metalloenzymes in the fields of infectious disease, inflammation and oncology.

Thorp took over as director of the Morehead with a commitment to create a broadly based science showcase from what had for half a century been a planetarium. Initially its finances and management structure were not in good order.

By the time he left, there was still a lot left to fix, but the improvements were noticeable. An attendance slump at the planetarium was reversed, the center’s capability to produce its own planetarium shows was improved, participation in children’s summer science camps grew enormously, and plans for a modest building expansion were refined. Probably most important, fundraising, which in the mid-1990s had cost more than it brought in, was put in a position to reach its goal for the Carolina First Campaign.

The Fayetteville native is the son of theater enthusiasts and Carolina alumni who started what became the Cape Fear Regional Theater. He grew up playing and working among theater technicians, actors and musicians.

A few years ago, his mother, Bo Thorp ’56, told the Carolina Alumni Review, “He has a strong sense of theatrics, of the pathos, the drama of our lives – especially he sees what’s funny, the ironies, the satire in everyday life.”

Thorp was aiming at medical school through his junior year at Carolina. But he was asked to join distinguished Professor Tom Meyer’s chemistry research team, and his work among Meyer’s postdoctoral students took hold of him. He was convinced he wanted to be a scientist. Carolina, he said, “is where I learned to love knowledge.”

“Here was this big family,” Thorp said eight years ago, “doing all these outlandish things – taking electricity and shooting it through mixtures of chemicals, trying to make new things, figure out new chemical reactions, how to take observations and extrapolate them to new knowledge. It just plugged in perfectly with music, doing lights in the theater and all these things I had done before, where you have this set of knowledge and tools, and you mess around with it in a creative way and try to conclude something new. You try to come up with a way to do it that nobody had thought of before.

“I’m sure they told me at the beginning that I was supposed to come in some minimum number of hours a week, but it didn’t matter. I showed up all the time. I got up in the morning, and if I didn’t have class, I went to the lab. Then I went to class and came back to the lab and hung out there until dinner time.”

In retrospect, Thorp’s return to chair the chemistry department looks to have been a holding pattern. In less than two years he was walking up the rise to South Building to become dean of the college after Bernadette Gray-Little was named provost.

He acknowledged that he had some catching up to do in the humanities. “I’m looking forward to learning about what inspires creativity in all these different disciplines,” he told The Daily Tar Heel at the time. “I know about how scientists come up with original things to do, but I have no idea about how historians and Shakespeare scholars do that.”

The college comprises the vast majority of the undergraduate academic units on campus, including 54 academic departments and 1,500 faculty and staff. Among the dean’s responsibilities are decisions on faculty hiring, retention and advancement, and fundraising.

Moeser said he spent 40 to 60 percent of his time on fundraising. In describing his work as dean late last year, Thorp talked a lot about the role of the modern chancellor with regard to fundraising and ambassadorship.

“My goals as dean,” he told the General Alumni Association’s Board of Directors, “are to maintain the great academic programs in the college and move a few more into the top tier, build appreciation for Carolina as a research university with a world-class undergraduate program, increase the interaction of undergraduates with idea generation and originality, encourage entrepreneurship, increase the academic profile of the fine arts, foster leadership culture, and be proactive about increasing faculty diversity and about keeping our best faculty.

“The dean’s job, as I see it, is to a) raise money, b) tell our story and c) oversee the largest school on campus.”

He was responsible for raising $57 million for the college in his time as dean.

After Thorp earned his bachelor’s of science degree, with highest honors, in chemistry from UNC, he received his doctorate from the California Institute of Technology.

He has earned recognition as a professor and as a researcher, including the Tanner Award for Excellence in Undergraduate Teaching, the David and Lucile Packard Fellowship in Science and Engineering, the Ruth and Philip Hettleman Prize for Artistic and Scholarly Achievement, and the Alfred P. Sloan Fellowship.

Fortune Small Business named Thorp one of its “Top Innovators of 2001” for his development of electronic DNA chips that received nine patents.

Thorp holds 19 U.S. patents and has published more than 130 academic papers. He was named in 2002 an honorary member of the Order of the Golden Fleece, the oldest honorary society at Carolina. He received the GAA’s Distinguished Young Alumnus Award in 2002, and he delivered the December Commencement address in 2006.

“He fully understands the deeply rooted connection between The University of North Carolina and the people of North Carolina,” Bowles said. “There will be no cultural learning curve for Holden Thorp. He knows the campus’ strengths and weaknesses inside out.”

In that 2006 address, Thorp told those new graduates: “I’m honored by the invitation to be here, humbled by the opportunity to say something you can understand without a calculator. I also feel nervous. Though I missed my own ceremony [he was off playing with his band], I’ve heard a lot of these talks since becoming a college professor. When I have to give one myself, I try to remember the good ones, but it’s hard to avoid thinking about the many true stinkers.

“My high school valedictorian gave one of my favorite such speeches. He concocted an amazing mixed metaphor. ‘Fellow students,’ he said, ‘the time has come for us to leave the nest and swim against the stream.’

“Since he hailed from North Carolina, I guess he wanted to include both hunting and fishing.”

Thorp lives in Carrboro with his wife, Patti Worden Thorp, a native of Hope Mills, and son John, 13, and daughter Emma, 9.

— David E. Brown ’75 is senior associate editor of the Review.