Hortense McClinton can claim many firsts in her life, including being the first Black faculty member at UNC. But she doesn’t make a big deal about it. From her perspective, every door she opened should have been open already. 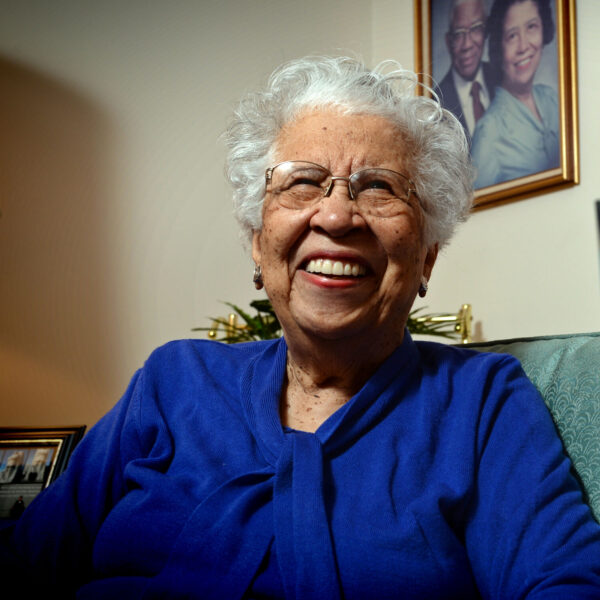 Born in 1917, McClinton grew up in the thriving all-Black town of Boley, Oklahoma, surrounded by successful professionals and people in the trades and without the constant denigration of white society sending a message that people of color weren’t good enough. She was unflinching in standing up for what’s right, and when her older brother put her on the train to go to college in the 1930s and make her way in a predominantly white society, he told her the same thing people of color heard regularly as they ventured into the wider world: “Don’t get into trouble.”

She didn’t court trouble, relying on her determination and grace in challenging situations, though she also didn’t acknowledge the boundaries set by segregation and a woman’s “place.” She earned her undergraduate degree at Howard University and her master’s in social work at the Ivy League’s University of Pennsylvania, where she was the only Black student in the program. During the hiring process, in which she would become the first Black professional at the Durham VA Hospital, the man interviewing her asked how she’d gotten to Penn. “On the train,” she replied.

McClinton came to Durham after marrying John McClinton, a CPA for the N.C. Mutual Life Insurance Company who was in Philadelphia conducting an audit. Durham had a strong Black middle class that lessened the sting of Jim Crow laws and the Legislature’s staunch insistence on segregated education even after Brown v. Board of Education ruled otherwise.

The Durham County Department of Social Services hired McClinton in 1954 as one of only three Black professionals in the agency — the maximum the director would allow. Social workers were matched to a caseload by race. The children in DSS custody were to receive medical care at a Duke Hospital clinic. But after a doctor there used an ugly slur against a girl McClinton had brought in for care, McClinton transferred the medical care of all the children on her caseload to a Black doctor in private practice and paid for their care out of her own pocket.

The DSS director had a tradition of taking professional staff to lunch on their birthdays, to a segregated restaurant. When it came time to celebrate his three Black employees, he simply gave each $1.25 to eat at a restaurant that served people of color. McClinton’s two Black co-workers refused to accept the money. McClinton accepted hers and announced pointedly that she was donating it to the NAACP.

McClinton had held leadership roles throughout college and graduate school and in professional organizations. While at the Durham VA, she supervised master’s degree students from UNC’s School of Social Work. The school offered her a grant-funded teaching position, which she declined because it was soft money, not part of the school’s permanent budget. In 1966, the school came back with a tenure-track position, which she accepted.

During her 20 years teaching at UNC, she was frequently asked to be the “Black voice” on various committees. At one time, she was on 11 committees simultaneously “before I learned I could say no,” she said. She’s discouraged that half a century later, Black faculty still are overburdened with committee assignments. “I always felt we made strides, and then we went backwards,” she said.

Early on, McClinton was asked to teach a course on institutional racism, but she held off until she had established herself as a respected member of the faculty rather than a novelty. McClinton has been honored as a revered teacher. The GAA-sponsored Black Alumni Reunion named its Outstanding Faculty/Staff Award for her, and the Kappa Omicron chapter of Delta Sigma Theta named its Senior Service Award in her honor.

Now at age 102, McClinton has seen generations of progress in racial equity, and some backsliding, too. While there are more Black faculty today, they are still pressed into committee service and mentoring more than their white colleagues. Some universities report fewer Black students are enrolling in social work degree programs. A social work pioneer, McClinton modeled strength and endurance as part of the continuum of the struggle to integrate in many areas of life.

Of her longevity she says, “Roll with the punches. Whatever happens in life, meet it, face it and keep going.”