Where are we now, Carolina, 20 years after the fall of the towers stopped our hearts? Twenty...

Justin Donaton ’99 has never been to the site of the World Trade Center, where... 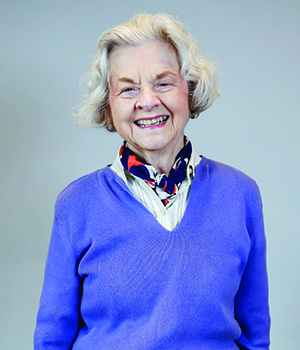 When the GAA opened the alumni center in 1993, Morgan applied to be a receptionist and immediately became an unofficial ambassador, too. People remembered their interactions with her, and she remembered them. Photo by Ray Black III

When employees came to work at the GAA on a rainy day, Elizabeth Morgan, warm, engaging and perched in her seat at the reception desk, made them feel heroic for showing up.

When alumni returning to campus stopped by the George Watts Hill Alumni Center, they left refreshed by Morgan’s genuine enthusiasm in welcoming them back.

When parents of prospective students ducked into the air-conditioned building for a brief break from the heat, they were soothed by her kindness.

Effortlessly fielding phone calls and deliveries and guiding visitors needing directions, Morgan greeted everyone as if welcoming them to her home.

“Every time I walked in the door of the alumni center, she was like sunshine coming through the window,” an alumnus said. “She was bright, caring, patient and welcoming. No matter what was going on around her, she was always happy to see you, whoever you were.”

At an age when most folks thought of retiring to the beach, Morgan joined the GAA staff as receptionist in the alumni center in 1993, when the building was but a few months old. A spry figure in a meticulously pressed cotton button-down, she conveyed dignity and professional aplomb.

Steve Shaw ’82, GAA vice president and chief financial officer — and Morgan’s supervisor — said as soon as someone opened the front door of the alumni center and began the long walk to the reception desk, “Elizabeth immediately focused her eyes and attention on them. She greeted them with a warm smile and would ask ‘How can I be of help?’ ”

GAA president Doug Dibbert ’70 said with Morgan at the front desk, first-time visitors instantly understood they were in the campus home of Carolina’s alumni and friends.

“She would happily provide directions and eagerly and proudly share the history of the various spaces within the alumni center,” Dibbert said. “If you were among the many who telephoned our main number, you could instantly feel Elizabeth’s happy, warm, enveloping smile.”

No one would guess that Morgan wasn’t an alumna of Carolina. She grew up on a farm in Wake County, one of six siblings. She earned a degree in elementary education from Woman’s College, now UNC-Greensboro, and held a firm belief that education was the great equalizer.

Early in her career, she helped her husband, George Morgan ’48, in his pharmacy business and raised their son. Once she had more free time, she played golf competitively and volunteered at the N.C. Museum of Art, UNC Pediatrics ICU, Duke Cancer Center and the rare book library.

But she had more to give. When the GAA opened the alumni center in 1993, she applied to be a receptionist and immediately became an unofficial ambassador, too. People remembered their interactions with her, and she remembered them. Her family recalled an incident when UNC President Bill Friday ’48 (LLB) left his seat at a table of UNC Trustees to cross a crowded restaurant for a lengthy chat with Morgan as old friends.

Morgan especially loved talking to prospective students and their parents. She always wanted to know where they were from, how they decided to consider Carolina and what their interests were, Shaw said. “I’m sure she had an influence on some students choosing to enroll here,” he said.

Morgan also wielded the power of authorizing who was allowed to park in the few coveted spaces around the alumni center’s circular drive. Famous people could charm, wrote her son, Dr. Bruce Morgan, in an obituary, but without one of the parking passes she signed, they would still get a ticket.

Morgan retired when the building closed in 2020 because of COVID-19 restrictions. Once it reopened, many who stopped in asked after her. During the pandemic, when employees worked remotely, Dibbert made a practice of calling them regularly to see how they were faring. Morgan insisted he didn’t need to check on her. But that’s not why he called during those anxious pre-vaccine days.

“I was calling her because our exchanges always gave me a boost,” Dibbert said. “That is just how special she was to us all.”