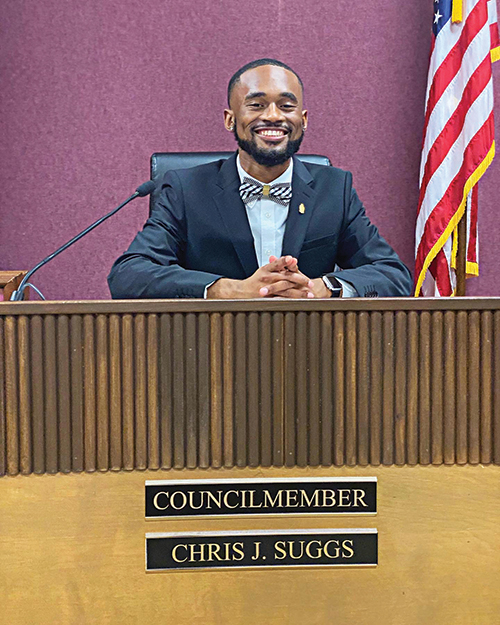 “I’ve always loved being involved in my community in Kinston,” Chris Suggs ’21 said. “I’ve been going to council meetings since I was 8 years old. It’s always been a place that’s piqued my interest, learning who are the decision-makers.” Photo courtesy of Chris Suggs ’21

The town of Kinston is used to seeing its star talent — basketball pros Jerry Stackhouse ’97, Reggie Bullock ’14 and Brandon Ingram, actors Ed Grady ’50 and Jaime Pressly, and musician Maceo Parker, to name a few — go out into the world and never come back. But Chris Suggs ’21, born and raised in the small town in one of the most economically distressed parts of North Carolina, returned.

After finishing his speeches at the five socially distanced 2021 Commencement ceremonies — wearing a different suit for each one, and not missing a beat when the teleprompter cut out — he took his political science degree back to Kinston and ran for city council. He was elected in November, receiving the most votes of any of the six candidates running to fill two seats, including an incumbent. In early December, he was sworn in by N.C. Supreme Court Justice Anita Earls.

“I’ve always loved being involved in my community in Kinston,” Suggs said. “I’ve been going to council meetings since I was 8 years old. It’s always been a place that’s piqued my interest, learning who are the decision-makers.”

Suggs is the second-youngest person to be elected to public office in North Carolina. (Mark Chilton ’93 was the youngest, elected to Chapel Hill’s town council in 1991.)

Even as a kid, Suggs had the air of someone going places. His aunt took him with her to council meetings to advocate for community change when he was a boy. His mother, a schoolteacher, took him and his sister to school board meetings as part of her role in an active parent-teacher organization. He accompanied his father, who worked for the town’s parks and recreation department, during town clean-up days and to Kinston council meetings when community service organizers were recognized.

The experiences taught the young Suggs how political structures work and how to effect change. So when he saw the brand-new elementary school he attended in fifth grade had no dividers between urinals in the boys’ bathrooms, he knew to talk with the principal and petition the school board. The dividers were installed.

At 14, Suggs started a nonprofit, Kinston Teens, to promote youth empowerment and community development in Lenoir County. Anytime he organized an event — registering young people to vote; helping to rebuild the community after a flood or hurricane; organizing a drive to collect coats, scarves and gloves for the homeless, the town’s most successful ever — he wrote and sent out a media release promoting it. The attention brought in more volunteers to help.

Suggs has served on the N.C. Governor’s Crime Commission since he was a senior in high school, when he was the youngest ever appointed to the post. After the Neuse River flooded the town in 2018, he testified before Congress the following spring at a hearing on the global climate crisis. He has been featured in Teen Vogue magazine and the HuffPost news website.

■ Second-youngest person to be elected to N.C. public office (Kinston city council)
■ Started a nonprofit at age 14 to promote youth empowerment and community development
■ Has served on N.C. Governor’s Crime Commission since he was in high school
■ Testified before Congress in 2019
■ Named one of 22 National Geographic Society Young Explorers for 2020

Suggs made the most of his time at UNC, starting with Project Uplift, a college-access program. He was a Light on the Hill Scholar, president of the Black Student Movement and was an inductee into the Order of the Golden Fleece. He was senior class marshal and class president. In 2020, the National Geographic Society named him one of 22 Young Explorers selected from around the world. The honor comes with up to $10,000 in funding. Suggs said he will use his funds for one of his initiatives, such as the free drive-thru food bank he has run out of the Kinston Community Center during the pandemic, or renovating The Neighborhood Hub, where Kinston Teens holds meetings and activities.

In 2016, before he left for college, his mother, Kristal Suggs, quit her job to become her son’s “mom-ager,” as she called it, to transport Chris to all his activities. In 2017, Kristal ran for city council, and Chris worked on her campaign. She won, Kristal said, because she had “the name recognition of being Chris Suggs’ mom.”
She decided not to seek reelection in 2021, and Chris said he was excited to run for the vacancy.

“This was a critical year,” Chris said. “Kinston is no stranger to crises, and the pandemic had exacerbated our problems.” The council will be choosing a new city manager, police chief and planning director, and Suggs, a strategic thinker who likes to plan 15 to 20 years out, wanted a voice in those hiring decisions.

Suggs works full time in public health, as a regional manager in a state vaccine program, and said he feels a responsibility to protect his constituents. At his first council business meeting, in January, he proposed the town require the public to wear masks in municipal facilities. Town administrators pushed back. Suggs, blending deference, tact and research, countered objections and offered solutions. Eventually, he convinced administrators to make masks available to the public at every facility and to encourage the public to wear them.

Putting constituents before political harmony can be lonely, but Suggs said he knew what he was getting into when he ran for office. “Politics is stressful; managing public opinions is hard,” he said. “I’ve been under a lot of scrutiny and criticism most of my life. Challenges come with being in the spotlight, but I’m up for it.”
Suggs is trying to influence colleagues old enough to be his parents, and he’s suggesting changes to a system designed to favor older, wealthier residents. Then again, his mother said, “He’s had an influence on this city for a long time.”

“He’s the epitome of someone living out his dreams,” she said. “I see him as the manifestation of Dr. Martin Luther King Jr.’s vision. I see Dr. King being proud of Chris.”