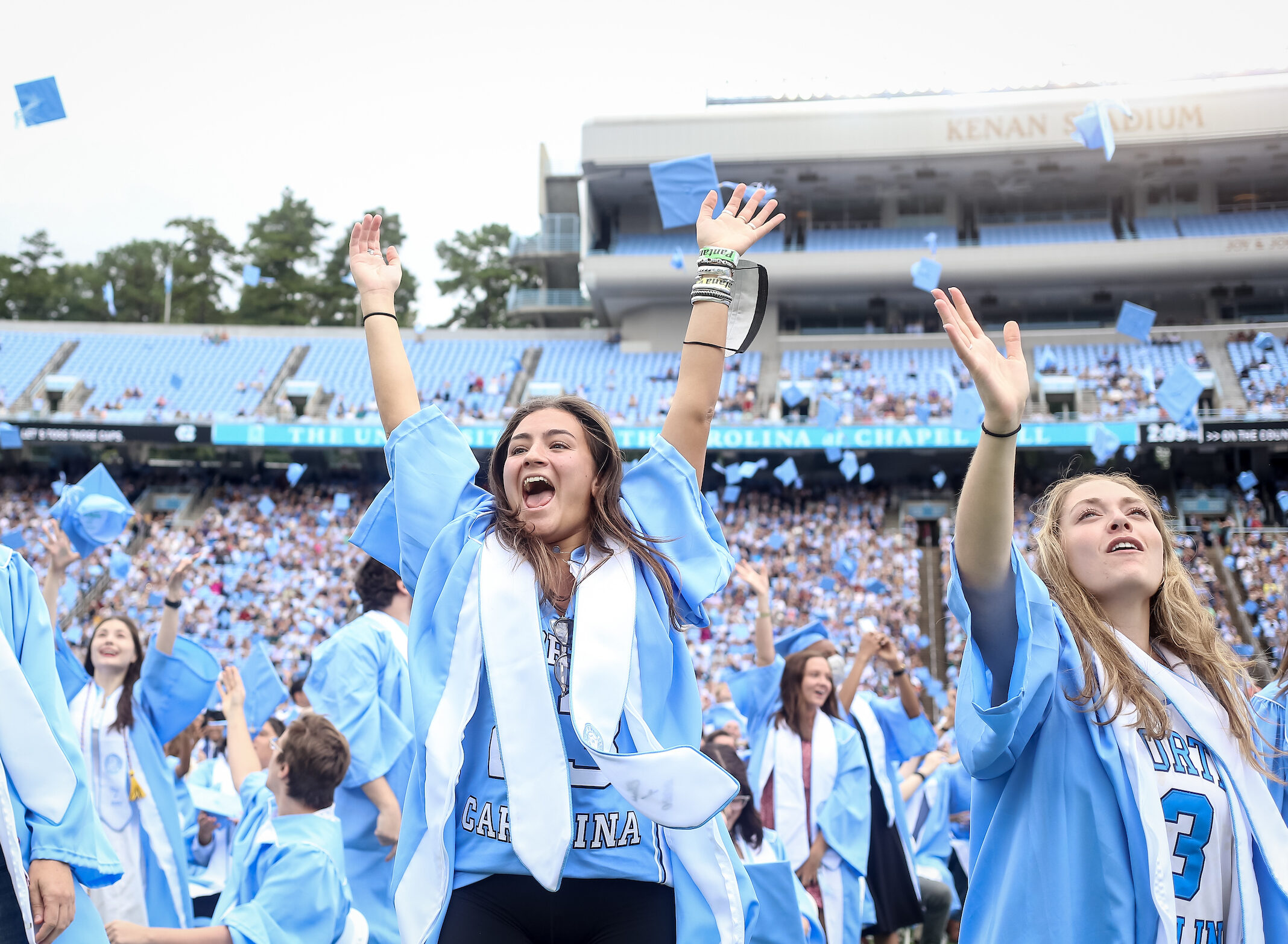 Jade Klein, left, and Danielle Altchiler throw their caps in celebration at the close of their class of 2020’s pandemic-delayed Commencement on Sunday. (Photo by Ray Black III)

The class of 2020 finally got some closure on their undergraduate college careers with a Commencement delayed 75 weeks by a global pandemic but made possible partly by a vaccine Tar Heel researchers helped develop.

Some of the senior traditions that COVID-19 canceled in spring 2020 returned over the Oct. 8-10 weekend. Bell Tower climbs. Photos in caps and gowns with family and friends in front of the Old Well. And a graduation ceremony on the field in Kenan Stadium — only now that the graduates were a year and a half into official adulthood, no one batted around beachballs above the crowd.

Aliyah Jordan took a few hours away from her graduate studies to decorate her mortarboard and catch up with friends at the General Alumni Association’s pre-ceremony champagne toast on the Bell Tower grounds.

“It’s a lot harder to celebrate when I have other obligations than the ending of my four years as a student,” Jordan said. Though her mother was the only member of her family able to make the trip for the weekend, she said, “I’m still excited.”

Rather than return this past spring to share a COVID-altered Commencement with the class of 2021, the class of 2020 opted for its own date this fall. Recently retired men’s basketball coach Roy Williams ’72 (’73 MAT) cleared his calendar to be their Commencement speaker. Almost 3,000 class members, and nearly 14,000 of their family and friends, returned for the festivities. 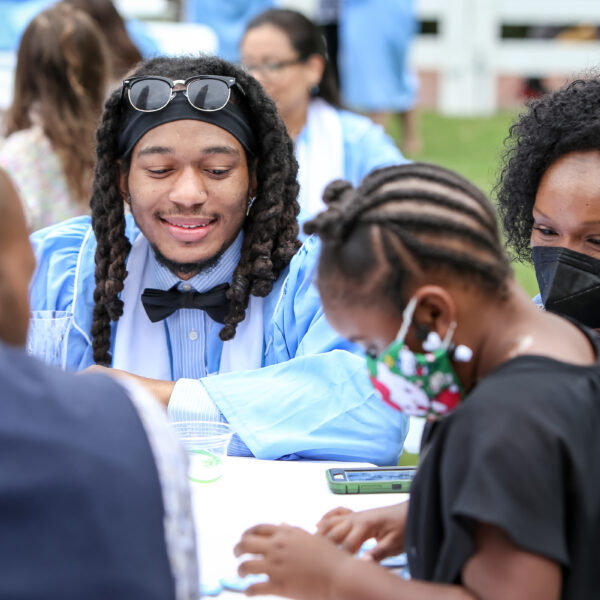 Aamonté Rice sits with his family during the General Alumni Association’s Champagne Toast before Commencement. “This was my home for four years,” Rice said, “so to return on this special day is incredible. … It was kind of like being back in college for a weekend.” (Photo by Ray Black III)

Aamonté Rice debated whether to take time away from his work as a corporate manager to return to Chapel Hill, but learning that coach Williams would be there cinched his decision.

“He’s retiring, and we can see him one last time,” he said.

Rice was glad he came. “This was my home for four years,” he said, “so to return on this special day is incredible.”

Carolina molded him to be successful and prepared him to “go into the real world,” Rice said. Sitting at a large table with his family on Sunday, the sweet smell of champagne wafting over the Bell Tower quad, he said about meeting up with friends from his student days, “It was kind of like being back in college for a weekend.”

Almost all of Tyler Brown’s friends returned for the Saturday football game against Florida State, and he also was happy to be back with them.

“I felt like I was a student again, going to the game,” he said. He’d returned to campus in May 2020 to take traditional graduation photos at the Old Well, “but with COVID, everyone was very spaced out, and it was kind of awkward.” He planned to re-create those photo ops in cozier groups before heading over to Kenan.

For Yasmine Zefri and others, Commencement felt more like a reunion.

“It’s definitely a different feeling than I would have had if I’d graduated [last year],” Zefri said. “But it’s good to see how things have played out, seeing people I haven’t seen in a long time and seeing where life has taken them, whereas you would only have had a preview of that at a regular graduation last year.”

Rob Gambino, who entered a master’s degree program sooner than he had planned due to the pandemic, said that even though “it does feel sort of weird” to be in a cap and gown almost a year and half later, “it still feels very special this morning. … I’m more excited to see other people I knew when I was here, because it’s been that long.” 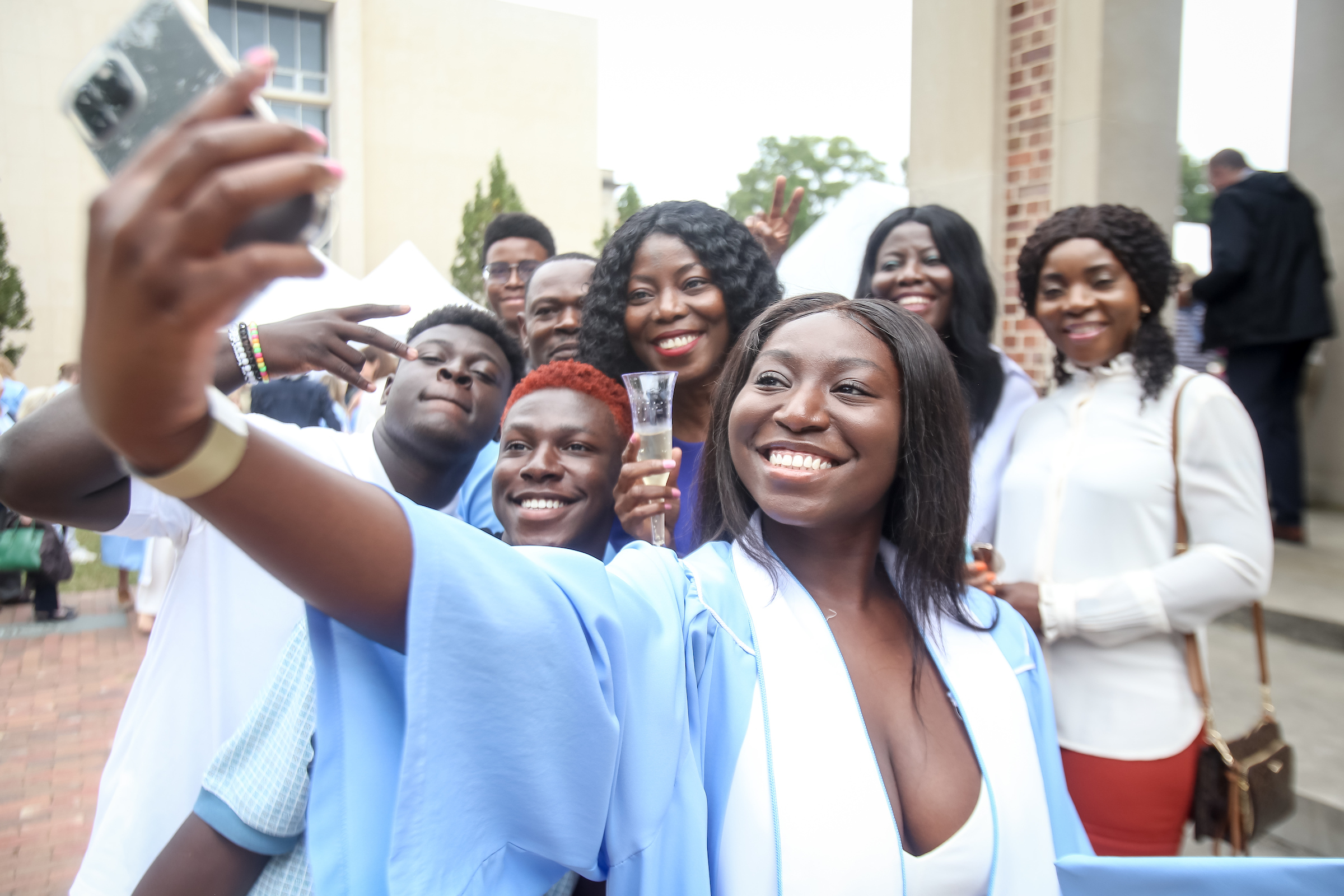 Angella Appah poses for a selfie with everyone who came to share her special day at the class of 2020’s pandemic-delayed Commencement. (Photo by Ray Black III)

“We all needed it”

Shruti Patel, who followed her plan to begin graduate school immediately after completing her bachelor’s degree in public health, drove from Washington, D.C., for the weekend and met her parents in Chapel Hill. She summed up her life since spring 2020: “You live out your life on Zoom, and you don’t get to say goodbye to your friends, and the next thing you know, you’re in grad school and the next chapter of your life. It’s a lot.”

Handing her near-empty champagne glass to her mom, she continued: “My time at Carolina made me realize I am smart, I am capable. And it’s really cool to be back.”

Reuel Kim, who earned her first bachelor’s degree from UNC in 2009 and graduated with a degree in dental hygiene last year, said the pandemic had interfered with her career trajectory.

“We were supposed to take our boards in March 2020, but all of our boards got canceled,” she said about the necessary professional exams. “They were rescheduled, then canceled again. We were sitting ducks.”

Unable to work as a hygienist without board certification, she enrolled in a master’s program at Carolina. Sipping orange juice with her former classmates before the ceremony, she said: “This weekend, we’re getting the feel of the celebration. But I think it will hit home once we’re in the stadium and go through the Commencement we thought we’d never have.”

The families of the graduates also were caught up in the emotion of the occasion.

Ricky Thompson had wondered whether this day would come. He and his wife, Barbara Thompson, made the eight-hour drive from Georgia to be with their daughter, Traci Thompson. She’d had a 20-year hiatus in her college career before graduating last year.

“It’s a real big deal,” her father said between photo ops with the family in front of the Bell Tower. “It feels really good to be here.” 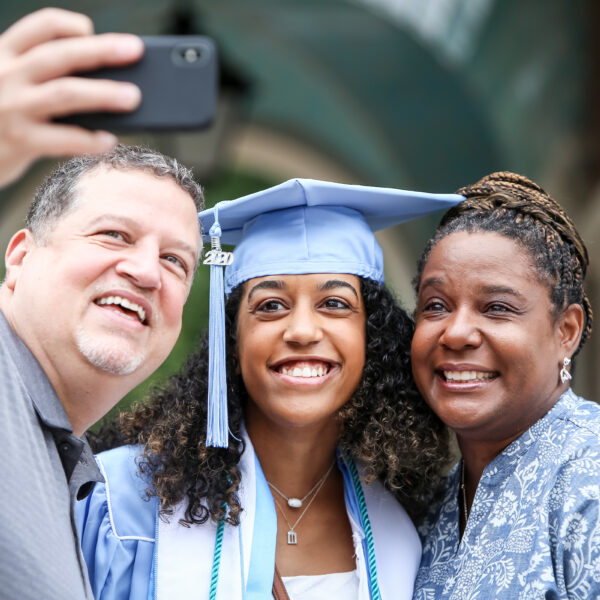 Sydney Conway poses for a family selfie with her parents during the Champagne Toast. (Photo by Ray Black III)

Charlie and Anjeleah Conway drove in from Virginia to celebrate with their daughter, Sydney Conway. Parents sacrifice for their children to come to Carolina and be successful, the mother said.

“We want to see them recognized,” she said. “I’m grateful that [UNC] is allowing this to happen. But it was a tough time.”

The father added, “I don’t think we realized how much we all needed it.”

Sydney, who stayed in Chapel Hill to work, said returning to campus felt “more like a reunion than an ending.” She got to see professors she hadn’t had the chance to say goodbye to her senior year.

“I felt like I jumped right back into feeling like a student,” she said. She went on autopilot walking around campus, but she discovered she was out of practice. “Doing the hills and miles of campus walking, I’m not used to that anymore. That made me feel like I’d moved on from the student phase.” 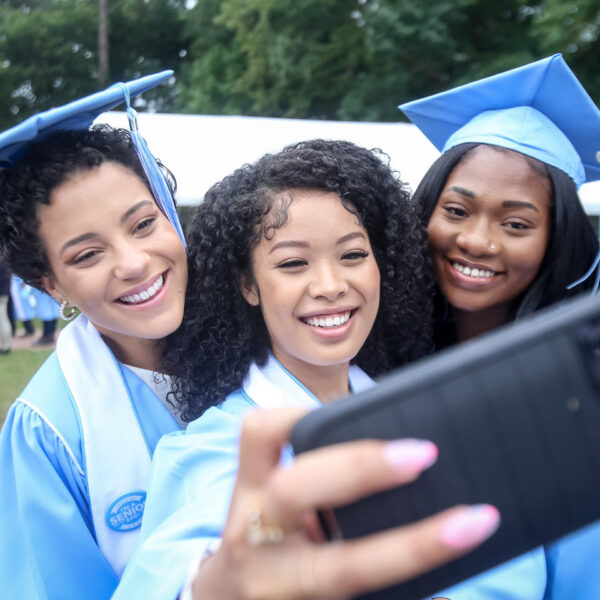 Class of 2020 members, from left, Jalen Amerine, Destiny Sanders and Jackie Omweno pose for a selfie during the Champagne Toast. (Photo by Ray Black III)

Jalen Amerine’s family flew in from Texas to celebrate with her. She and her roommate agreed that “if we’d had Commencement in 2020, it would have been sad because we would have been saying goodbye to all our friends. But now it’s a lot happier because [we’re seeing] people we haven’t seen in so long.

“It’s been a shining light for all of us to come back and celebrate,” she said.

The weight of all she’d missed her final semester hit Jessica Casimir hard.

“When I stepped on campus, I was about to cry my eyes out,” she said. She eschewed the traditional white dress in favor of fall colors, because “the white dress is the normal thing, and nothing about my experience has been normal.”

“Everyone’s life got stalled a little bit,” she continued. “Everyone was trying to manage their expectations.”

Once Casimir made peace with the fact that she wasn’t going to get the second half of her senior year back or experience some of the senior traditions that she’d been looking forward to since her freshman year, she was able to “come back and live the best part of my life, for only three days.”

Treasure Williams walked into Kenan Stadium with a stole embroidered with “Black Girl Magic” in honor of the long line of strong Black women she’d come from. A double Tar Heel, she’d earned her bachelor’s degree in 2018 and completed her master’s in social work in 2020. “I feel like I can finally close this chapter, put a bow on it and move on and have this moment for my family.

“We’re here, and that’s what matters,” she said.

Though the white folding chairs had been carefully set out on the Kenan field at a socially distant 6 feet apart, some of the new alumni rearranged them into clusters as soon as they’d sauntered in, recording videos of themselves to capture the moment.

In a stroke of inspiration, Rachel Palmour found a way to visually tag the day as special but unusual. She commandeered a group of friends to join her in donning pageboy wigs dyed Carolina blue to match their caps and gowns.

“It felt like an abnormal Commencement,” she said, “and why not have abnormal hair?” 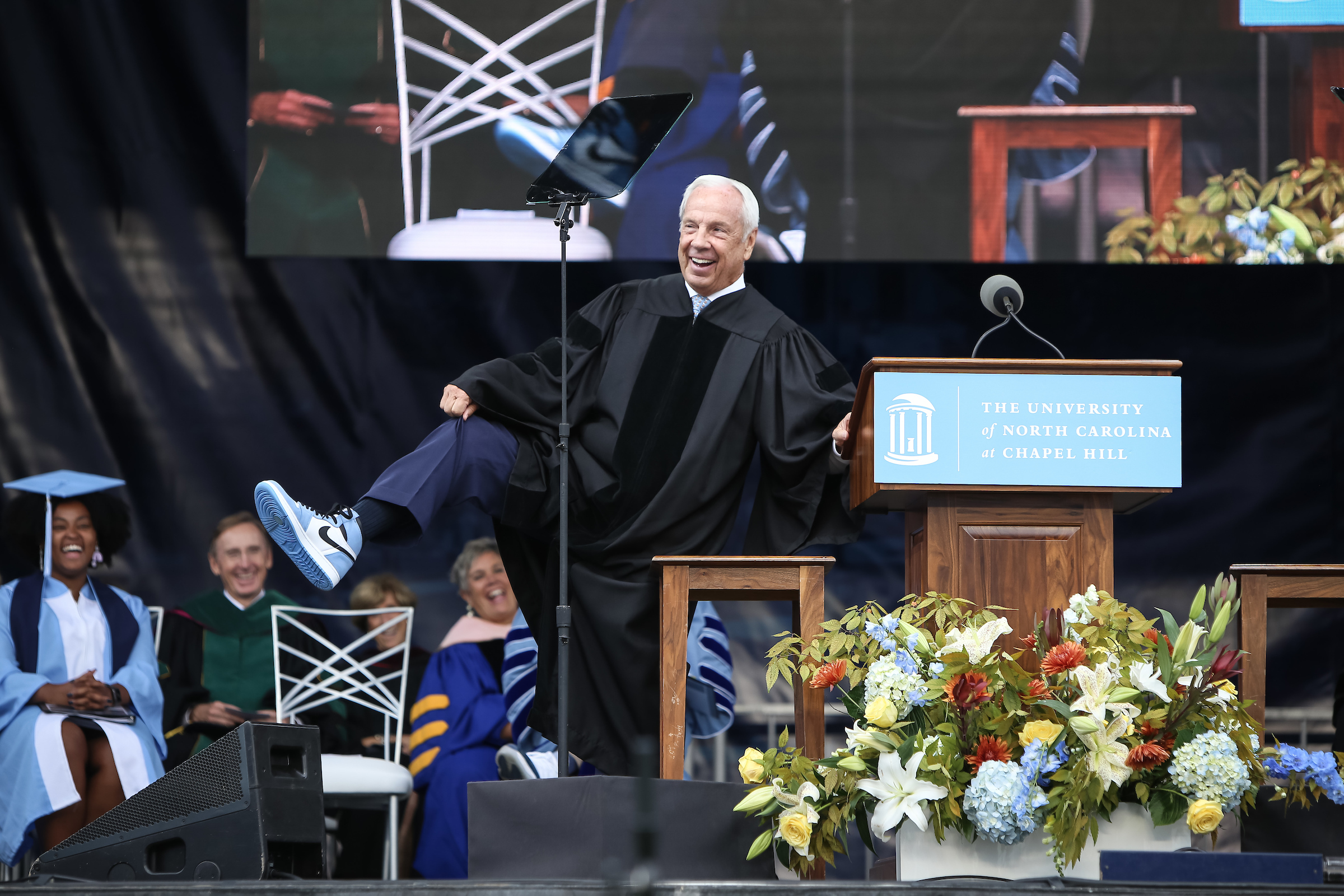 “Be led by your dreams”

In his Commencement address, Chancellor Kevin Guskiewicz told the class to savor the moment they were denied last year. 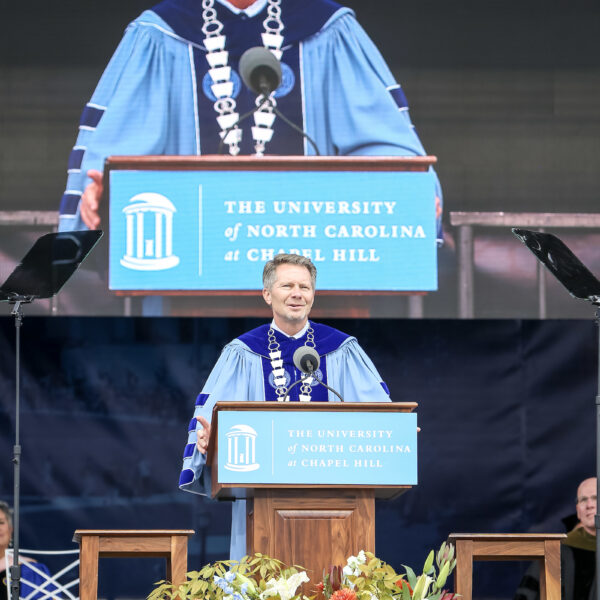 Chancellor Kevin Guskiewicz, whose son Nathan was among the graduates, told the class that they should savor the moment they were denied last year. (Photo by Ray Black III)

“This weekend is about taking that time back — for each one of you,” said Guskiewicz, whose son Nathan was among the 2020 graduates. “It’s about stopping and looking around, taking in the beauty of this magnificent campus, saying thank you to a professor who challenged you to see the world differently, cheering on the Tar Heels in Kenan Stadium again. … We don’t want you to miss this moment because we don’t want you to miss the traditions and the experiences that define your last semester.”

Coach Williams couldn’t remember the keynote speaker at his Commencement (it was Elizabeth Duncan Koontz, first African American president of the National Education Association). He made an effort for the class of 2020 to remember theirs — he showed off the brand-new pair of Air Jordans he was wearing.

Williams said Carolina had been his second home since he first arrived as a student. He hoped they felt that same connection.

“Your home will always be where your mom and dad and your closest friends [are] and where you grew up. But you grew up a different way here at the University of North Carolina. This will always be your second home. Always,” said Williams.

The graduates’ time at Carolina prepared them for whatever comes next in their lives, even when it isn’t easy, he said.

“Be led by your dreams, not pushed by your problems,” Williams said. “You may have some adversity. You probably will. But you’re a graduate of the University of North Carolina at Chapel Hill. You can do anything. I love you. I want you to love this place like I do.”

Class of ’72 Reunion: Roy Williams and his wife, Wanda, both members of the class of 1972, will have an opportunity to march into Kenan Stadium wearing Carolina blue robes themselves in May 2022 to celebrate their 50th graduation anniversary with their classmates. Visit the class’s reunion website to see what’s in the works.