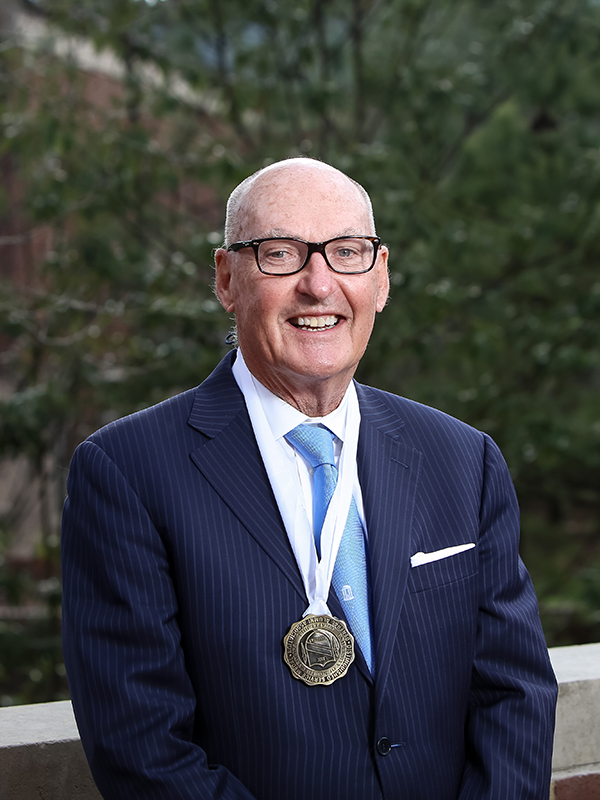 As captain of the basketball team his senior year in 1970 and planning for his future, Jim Delany had to get from the site in downtown Charlotte where he was playing in the ACC Tournament out to where the LSAT was being given. He didn’t have transportation, so Dean Smith lent Jim his Carolina blue Cadillac convertible under two conditions: that he drive within the speed limit and not put the top down.

Jim was a responsible guy, but he was also barely out of his teens, and the first thing he did when he got in the car was put the top down. Unfortunately, he didn’t know how to put it back up. When he returned the car to Coach Smith, he had to confess. But, he added, “I didn’t speed!”

That speaks to the confidence, even cockiness, Jim has had all his life. It also shows his honesty, integrity and a dash of fearlessness. Bundle all those traits together, and you can see why Jim rose from modest means to become what some say was one of the most influential men in college athletics — commissioner of the Big Ten Conference.

Throughout his career, Jim never shied away from putting in equal parts energy and effort. As a law student, he woke up before dawn every morning, mounted his electric scooter and delivered newspapers to earn some spending money.

Immediately after law school, Jim worked as counsel for the North Carolina Senate’s Judiciary Committee, then at the attorney general’s office in Raleigh before joining the NCAA as an enforcement officer in Kansas City. He was barely 30 and had no prior management experience when he was named commissioner of the Ohio Valley Conference. In 1989, he took on the challenge of leading the Big Ten.
College athletics commissioners often find themselves benched by the big egos of multimillion-dollar coaches well aware of the revenue their teams bring to their schools. But Jim is an advocate of the student-athlete concept, emphasis on the student. He formed alliances with university presidents, drawing on the power of a team approach to get things done without putting himself in the spotlight. Just like he did in the 1969 Elite 8 game against Davidson. Sure, Charlie Scott ’70 sank the winning shot that propelled Carolina to the Final Four. Jim was the player who fed him the ball.

Jim managed the public face of the Big Ten while expanding its opportunities. Colleagues describe him as forward thinking, someone who looks around corners to see what’s coming.

During his tenure as commissioner, which ended with his retirement on New Year’s Day 2020, Jim notched several wins. He expanded the conference to 12 teams, held firm on a bowl system in football instead of playoffs, adopted the Gender Equity Action Plan and created the first athletics conference TV channel, the Big Ten Network.

As demanding as his career has been over the past 30 years, he still made time for what matters — friends, family and his alma mater. Whenever UNC called, his only answer was “yes.”

Jim has been a guest lecturer for the business school, journalism school and law school. He served on the GAA Board of Directors from 2005 to 2008 and from 2011 to 2019, including as chair during 2017–18. He has been an informal adviser to successive chancellors over the decades: Michael Hooker ’69, James Moeser, Holden Thorp ’86, Carol Folt and Kevin Guskiewicz. And he and Kitty donated $1 million in scholarship aid to Carolina Covenant recipients and law school students. He received the University’s Distinguished Alumni Award in 2019.

Throughout his life, Jim has climbed mountains, literally and figuratively, including hiking Machu Picchu and summiting Mount Kilimanjaro. He inspired and encouraged a friend to train for a once-in-a-lifetime father/son bonding climb of that peak. Now that he has retired, Mount Everest calls.

Many organizations have recognized Jim for his accomplishments. He received the UNC Law School’s Distinguished Alumni Award in 2012 and the Basketball Hall of Fame’s Lifetime Achievement Award in 2016. Sports Business Journal named him to its list of the 20 most influential sports executives over the past 20 years.

Yet Jim prioritizes relationships over accomplishments. Countless people consider Jim one of their closest friends. As one of those close friends said: “Jim knows where he came from. He knows what UNC did for him. And he knows how to repay a debt.”