Sometimes a career surprises with where it takes you. For Jim Leloudis, the surprises came in where it kept him. 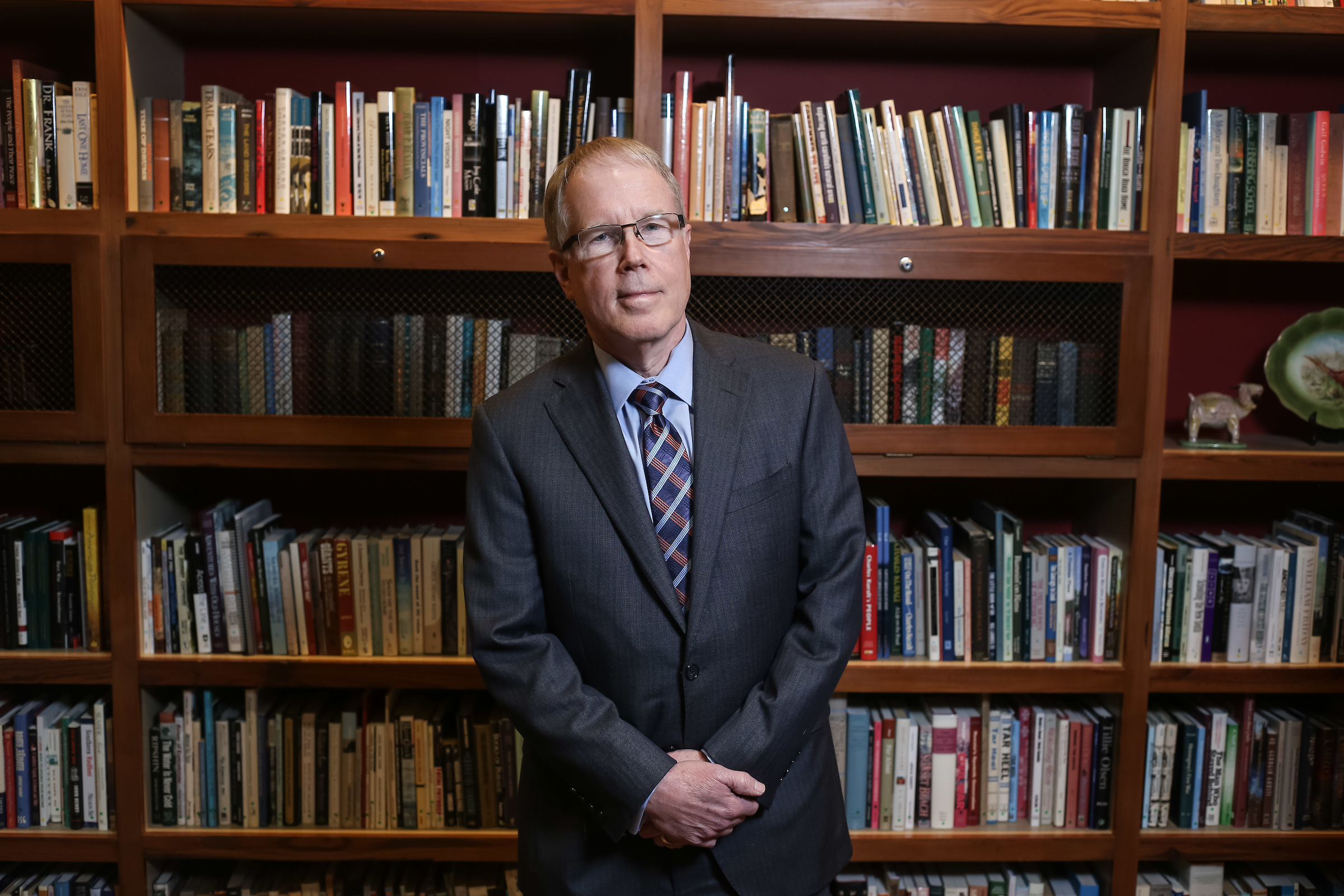 A Rocky Mount native who grew up in Raleigh, Jim came to Carolina as an undergraduate in 1973. After earning his master’s degree at Northwestern University in Chicago, he returned to Chapel Hill for his doctorate. And that’s where he has been ever since. He joined the faculty in 1989 and has steadily accrued responsibilities and titles. He and the former Dianne Hall ’77 (’84 MSN) married a week after their graduation in May 1977.

Shortly after Jim received tenure, Dick Soloway, the history department chair at the time, took him to lunch and asked him about his career plans. Jim said, “I want to be a player.” Dick took a risk on Jim and made him associate department chair.

For the next almost 30 years, Jim demonstrated his ability to be a player, to help shape the University that he loves and the ensuing generation of leaders from his position in the history department. He is the Peter T. Grauer Associate Dean for the Honors Carolina program and the founding director of the James M. Johnston Center for Undergraduate Excellence. He serves on the Undergraduate Advisory Committee, oversees the Office of Distinguished Scholarships — including the Burch Fellows Program, the Winston House European Study Center and the Washington Seminar in Domestic and International affairs — and raises money. His fundraising success has enabled the Honors Carolina program to double the number of students it accepts by endowing 15 new faculty positions. The donations also enabled the University to buy Winston House, which expanded the program to London.

A UNC trustee noted that Jim “could have made a ton of money doing something else,” but he chooses to teach and to help lead the University whenever he has been asked to take on a new role.

Jim’s talent as an educator has come into play in nearly every new position he has accepted. He has introduced the past two chancellors to the campus and has educated them on UNC’s history. He co-chairs the chancellor’s task force on the University’s history, which has the vital role of curating aspects of Carolina’s past that often have been overlooked. In all of the discussions he has led on the more uncomfortable aspects of UNC’s history, he lets people make their own decisions but makes sure they have all the information they need to do so.

An award-winning historian, his recognitions includes the Engaged Scholarship Award from the Office of the Provost in 2011 and the North Caroliniana Society Book Award in 2010. He values the commitment North Carolina has made to public education, and he champions support for it. He can be critical of UNC when necessary but balances that with emphasis on the greater good that a public university offers.

Because he has the perspective of both an academic and an administrator, he engenders trust from both sides when faculty and administration disagree. People listen to Jim in a way they might not to a more confrontational person, yet he is a truth teller. He believes that understanding our history and confronting darker chapters with unflinching honesty will lead us toward a future that is more democratic, inclusive and just. He can be persuasive, enormously patient and really stubborn.

As the dean for Honors Carolina since 1999, he has increased the diversity of students accepted and brought in Carolina Covenant Scholars. He’s the kind of professor whose class you don’t want to miss. He brings out the best in those around him, in his students, his staff, his colleagues and other board members. Said a colleague: “Jim believes everyone has the opportunity to be great.”

Early in his career at Carolina, he was one of six scholars in the Southern Oral History Program who collaborated on a book, Like a Family: The Making of a Southern Cotton Mill World, which went on to win nearly every award in its path. The social sciences and humanities are known for silos of fiercely independent scholars, and history is very much a single-author-book discipline. Their book made a statement about the value of collaborative scholarship, and Jim has continued to nurture that culture at UNC over the years.

What has been most satisfying to Jim in his career at UNC has been the opportunity to teach extraordinary students, to prepare a generation of global citizens who will be vitally important to our state and country in the years ahead. When he thinks of students and alumni who have invested in the University with their philanthropy and talent, he has to pinch myself and remember he gets paid to do this.