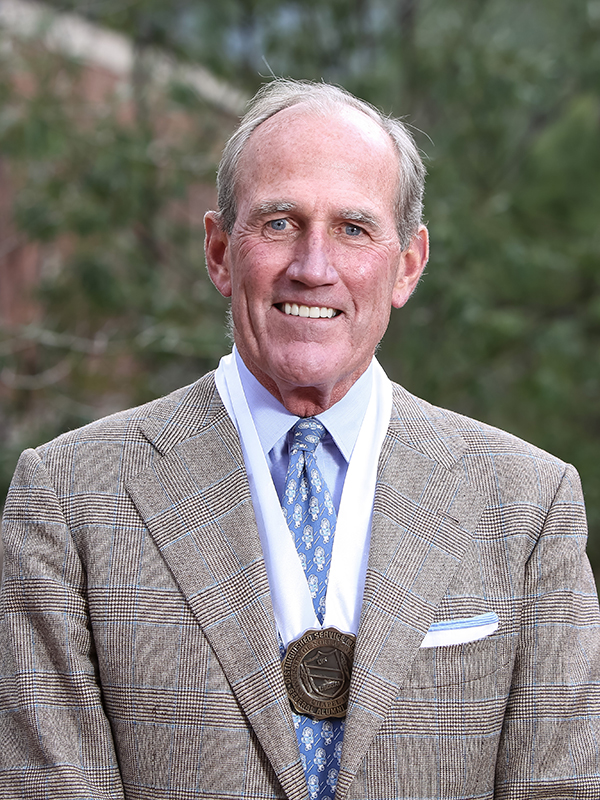 With his classic good looks and his well-cut sport coats, John Townsend ’77 would be whom you might expect to arrive if you asked central casting to send over a Titan of Finance. You might find the self-possessed man of few words intimidating, until you engage in a conversation with him and realize that he’s listening to you intently, and that he can laugh at himself. And if the talk turns to art, the demeanor of the former Goldman Sachs partner and Tiger Management COO gives way to the kid from Lumberton who feels the thrill and privilege of becoming a collector.

John’s current life seems far removed from the one he envisioned when he followed in his parents’ footsteps to enroll at UNC. He met his future wife at Carolina, and after he and Marree ’77 graduated and married, they moved to his hometown and bought a house. His plan was to join in the farming and other businesses his family owned in and around Lumberton.

But within a few years, he and Marree made the decision to forgo their safe, secure life in Lumberton so John could return to UNC to pick up some business skills he hadn’t learned as an English literature and American history major. After he completed his MBA, they moved to New York where, with equal parts ambition, determination and luck, he built an extraordinarily successful career in investment management and banking.

He used his education to accomplish things he wouldn’t have been able to otherwise, he said. It fostered his curiosity and stoked his interest in different aspects of life. It inspired him to be a more thoughtful person, he said. It gave him the means to become an art collector, and it opened doors for him to give back to Carolina in many ways. Both their daughters have become third-generation Tar Heels.

About 20 years ago, John accepted an invitation to join the executive committee of the UNC Investment Fund, which he now chairs. He served on the Endowment Fund Board, the Board of Trustees and the board of the Institute for the Arts and Humanities. He also belonged to the UNC-Chapel Hill Foundation Board and the Ackland Art Museum’s National Advisory Board.

John has taught classes at Kenan-Flagler Business School and served on its board of visitors. In 2000, he received Kenan-Flagler’s Outstanding MBA Alumnus Award.

He was part of UNC’s 2013 Capital Campaign Planning Cabinet and is co-chair of UNC’s For All Kind Campaign steering committee.
In 2017, John received the William Richardson Davie Award, the trustees’ highest honor for service.

At the kickoff of the For All Kind Campaign, John spoke about the “transcendent joy of philanthropy.” His generosity extends from the school of business to the College of Arts & Sciences, Carolina Performing Arts, the Medical Foundation, the Educational Foundation and the Institute for the Arts and Humanities.

And he shares his love of art.

John and Marree have been rigorous collectors. Over the years, they have acquired some 150 pieces by American and European modern masters. In 2017, they donated $25 million worth of those paintings and prints to the Ackland as part of their $50 million contribution to For All Kind. The gift has been transformative and lifts the Ackland’s collection to a new level.

But much of John’s loyalty to Carolina is done quietly. He eschews the spotlight while getting his message across. As one colleague put it: “He’s quiet, but he’s loud.”

John has a reputation for being highly principled and setting the bar high. As a board member, he asks the questions management should be asking, yet he comes across as affirming rather than challenging, and opens people to think in different ways.

He introduces people to one another and to new experiences. He seeks adventure everywhere. Though he stepped down from Tiger Management in 2017, he still chairs the Townsend Family Foundation and directs a private investment fund. He also raises money for the Grand Teton National Park Foundation and annually sponsors a group of teens from his former high school to “hike the Grand” and hosts them for dinner at his home in Jackson Hole, Wyoming, where he gets up early to meditate with a view of the mountains.

The tip this phenomenally successful investor gives? “An education at UNC is one of the best investments you can make in your life.”