Barbara Rimer’s work ethic doesn’t allow for much time to go to the movies. When she does, friends say, she goes to the Chelsea, which has enough light in the back row to allow her...

Patrician and dignified, John Burress makes an unlikely candidate for auctioneer. Yet when UNC’s Lineberger Comprehensive Cancer Center organized a fundraising auction, John stepped up to the gavel. When John takes on a commitment, he goes all in. By the end of the night, he had whipped the crowd into a bidding frenzy that raised the most money ever for a basketball signed by the Carolina men’s team. 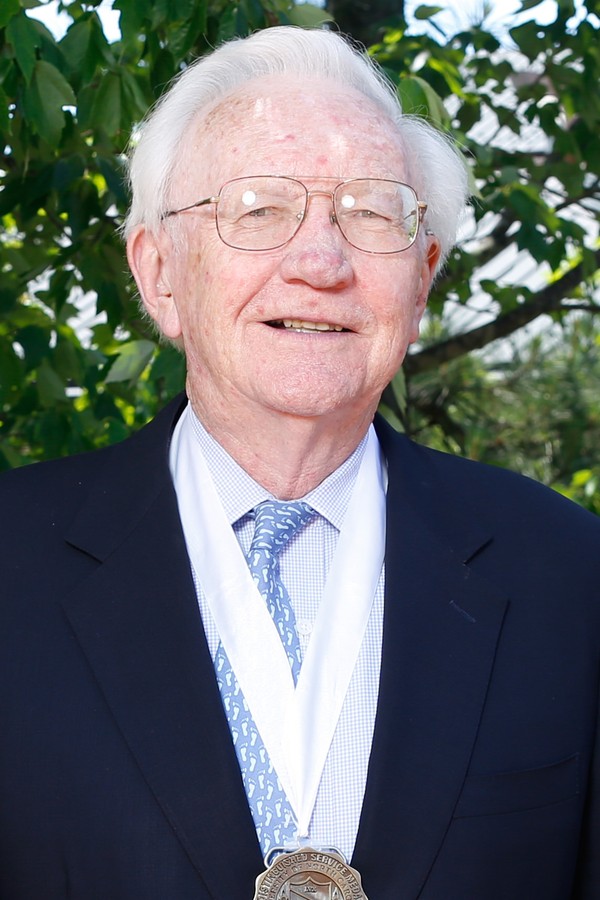 Fundraising matters. Organizations can’t pursue their worthy missions without money. Yet few people can raise large sums well. John has a record of success inspiring people to give to good causes, in part because he rarely asks people to contribute beyond a level that he isn’t willing to do — or hasn’t already done — himself.

John’s philanthropy often remains under wraps. He has a habit of donating to honor others: scholarships in the names of people he admires, or rooms with a plaque celebrating others who deserve recognition. Respect for him goes beyond his business acumen to his great success as a thoughtful human being, said Tom Lambeth ’57, who has worked with John in civic and charitable organizations for decades.

John’s giving philosophy started in his preteen years when he caddied for his father, who showed him how to rake a sand trap. “Always leave the sand trap in better shape than you found it,” his dad advised, and John has applied that wisdom to every aspect of his life.

A Virginia native, John followed his sister and a passel of friends to Carolina, and he remains grateful that UNC took a chance on him. He didn’t have a high school diploma; Latin and trig got the best of him, he said.

“Carolina afforded me a huge opportunity,” he said. “I got a good education. I had a great time. And I made lifetime friends.”

Upon graduating, he joined his father’s construction machinery business, where he had worked summers during high school and college. The business had only 10 employees at the time, but over the ensuing 40 years, John, who became president, helped J.W. Burress Inc. expand to 13 locations throughout the mid-Atlantic states. He sold the business in 1997 and officially retired in 2000, which created more time for him to support causes closest to his heart. UNC ranks high among them.

An original supporter of the new building for the Lineberger Center in the early 1980s, John was recruited to be a founding member of its board of visitors. Well-known among the UNC community and in Winston-Salem, where he has lived for decades, John connected people of stature throughout the state with Lineberger to spread the word about the center’s mission among legislators and prospective donors.

Recognizing the breadth of academic excellence and public service at UNC, John supported many aspects of the University. He served on UNC’s Board of Visitors and the board of the Institute of the Arts and Humanities. An early contributor to the construction of the Smith Center, he was elected president of the Educational Foundation. He was tapped for the General Alumni Association board. A former member of the Bicentennial Steering Committee, he also holds emeritus status on the Kenan-Flagler board of visitors. In 2001, UNC’s Board of Trustees honored him with the William R. Davie Award.

John has received numerous awards and honors for his contributions to organizations in the Winston-Salem area.

In the past decade, he has devoted thousands of hours to causes that benefit children with learning disabilities and autism. For years he worked on legislation in North Carolina for autism treatments to be covered by insurance. Last fall, the General Assembly passed a law requiring such coverage.

John has raised money for scholarships to a special school for such students and is raising $4 million for a new school. He’s lobbying legislators again, this time for a licensing bill for caregivers of children with autism. And he’s gearing up for another capital campaign at UNC.

“I enjoy what I’m doing,” John said. “It just happens to be what some people call work.”