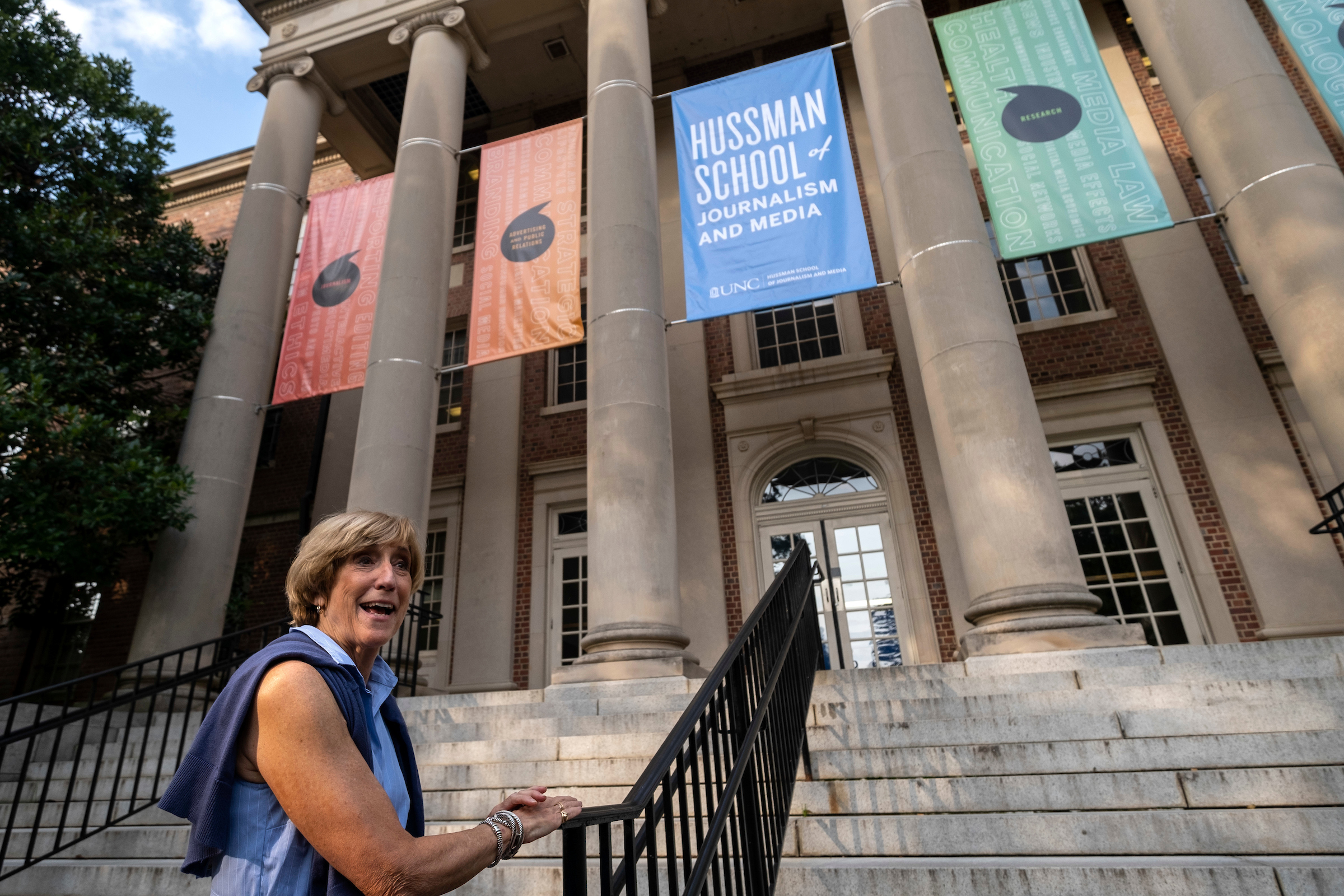 Dean Susan King checks out a banner hanging on the front of Carroll Hall in September 2019 proclaiming the newly named Hussman School of Journalism and Media, thanks to a $25 million pledge from Arkansas publisher Walter Hussman Jr. ’68. (UNC/Jon Gardiner ’98)

Susan King, dean of UNC’s Hussman School of Journalism and Media since 2012, is stepping down as the school’s leader.

King will remain in the position until a successor is named, the University said in a statement on Tuesday, and a search will begin immediately. In an email to Hussman faculty, King wrote that she had never intended to stay in the position longer than a decade and that she plans to return to the faculty after a leave, according to media reports.

“Media — journalism, public relations and advertising — are in a state of great change,” wrote King, who also is the John Thomas Kerr Distinguished Professor at Hussman. “It is not the same world or business even as it was in 2012 when I arrived. I believe after 10 years a new dean will bring fresh eyes, additional perspective and new energy to our school.”

Chancellor Kevin Guskiewicz and Provost Robert Blouin credited King with bringing that kind of energy to the school, strengthening its foundations and bolstering its enrollment.

King “has advanced the school in numerous ways during her decade as its leader,” they wrote in a statement to the campus community. “Her emphasis on creating experiential learning opportunities for students, increasing faculty support and upgrading facilities to reflect media innovation are among the reasons media and journalism is now the University’s second-largest major.”

During her decade as dean of the school where UNC teaches journalism, advertising, public relations and other communications skills, King has seen it through triumphant and turbulent times. Its very name, known as the Hussman School of Journalism and Media since 2019, exhibits both.

Arkansas newspaper publisher Walter Hussman Jr. ’68 pledged $25 million to name the school. It was the largest single donation in the school’s history and helped it surpass its $75 million goal within the University’s $4.25 billion Campaign for Carolina, which runs through 2022.

That same year, the Ida B. Wells Society for Investigative Reporting moved from Harvard University to UNC. Among its co-founders was Nikole Hannah-Jones ’03 (MA), a staff writer for The New York Times Magazine who would win a Pulitzer Prize in 2020 for her work on “The 1619 Project” — marking the 400th anniversary of the arrival of the first enslaved Africans in what would become the United States.

Those two high-profile accomplishments would also put the school in the middle of a collision course between the two prominent alumni responsible for them, sparking roiling debates over journalistic principles and the sanctity of the University’s tenure process.

As Hannah-Jones’ UNC tenure bid wended its way through official campus channels over the past year, Hussman corresponded with campus administrators, members of its Board of Trustees and King about what he worried was a lack of objectivity in the journalist’s work. Meanwhile, Hannah-Jones took issue with Hussman’s “attempt to pull the strings behind the scenes,” as she wrote in a statement in which she rejected the tenure package that was eventually approved by the trustees.

While navigating the ongoing unrest, King told her faculty in a newsletter in late May that she had been “very frank with Walter and always will be,” according to The Chronicle of Higher Education. “The faculty decide who is invited to join the school and what we teach. I have also been clear that the values of academic freedom and philanthropic distance are as important as core journalistic values. We are guided by all three.”

King has advanced the school’s reputation as a collaborative entity over the past decade. She has helped the school forge numerous local, national and international partnerships to foster diversity in media and journalism, including with Capitol Broadcasting Co. and Bloomberg.

Across campus, several collaborations were born under her direction, including the Center for Innovation and Sustainability in Local Media and the interdisciplinary campus Center for Information, Technology, and Public Life. The Curtis Media Center — an education technology hub with a media production facility and lab and classroom spaces that encourage and enable collaboration — is nearing completion on the former Phillips Annex site on Polk Place. 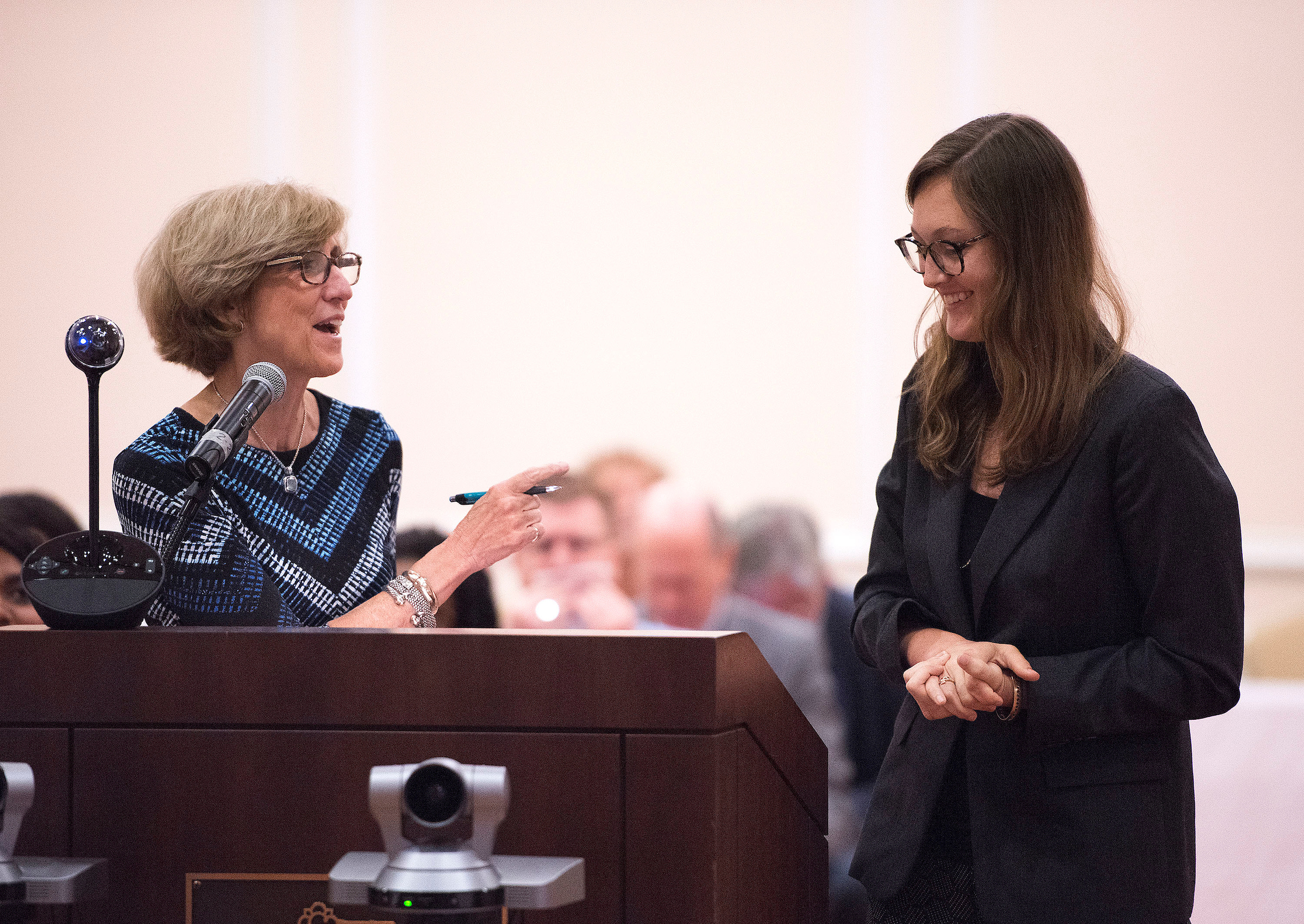 In 2020, King was named the 2019 Scripps Howard Administrator of the Year by the Association for Education in Journalism and Mass Communication, which is the highest recognition for a dean in her field.

After starting her broadcast journalism career in Buffalo, N.Y., King spent more than 20 years in Washington, D.C., as an anchor and reporter covering politics, including serving as a White House correspondent for ABC News. She also reported for CBS, NBC and CNN, and hosted the Diane Rehm Show and Talk of the Nation for National Public Radio.

King then served as assistant secretary for public affairs in the U.S. Department of Labor and as the executive director of the Family and Medical Leave Commission.

She became dean at UNC following a 13-year career at the Carnegie Corp. of New York, where she was vice president for external affairs. She launched and led the Carnegie-Knight Initiative on the Future of Journalism Education in collaboration with the John S. and James L. Knight Foundation and 12 U.S. journalism schools, including UNC.

Other recognitions include the Lifetime Achievement Award from the International Women’s Media Foundation, an organization she co-founded; the Earle Gluck Distinguished Service Award by the N.C. Association of Broadcasters; and the DeWitt Carter Reddick Award for Communication Excellence from the Moody College of Communication.

Her exit continues a trend of shifting horizons at UNC. King, who is 74, is the third dean in recent weeks to announce that she would step down from the leadership of a Carolina school. Nilda “Nena” Peragallo Montano, dean of the School of Nursing, and Barbara K. Rimer, dean of the Gillings School of Global Public Health, announced their retirements in August. The University said the search committee for King’s successor would be chaired by Gary Marchionini, dean of UNC’s School of Information and Library Science.

King acknowledged that her last months as Hussman dean would be one of change. She called her time working with the school’s faculty and staff “a deep honor.”

“This last year has been difficult on so many levels,” King wrote to her faculty, “and I find I admire you even more — individually and as a group. Our school culture kept us focused on engaging our students in the big and important issues of the day, our commitment to diversity in terms of thought, race, gender, identity, philosophy and other differences was deepened, and our belief that communication and free expression are at the heart of a multi-cultural democracy has been tested and is stronger. I am proud to say I am dean at this moment.”