A Perfect Season — For the Fifth Time

Field hockey Coach Karen Shelton says talent, toughness and focus were the ingredients for this year’s...

In his first letter to alumni as “director of alumni affairs” in the September 1970...

John Keats penned some of the most quoted lines in English poetry: “A thing of beauty is a joy forever”; “Heard melodies are sweet, but those unheard are sweeter.” 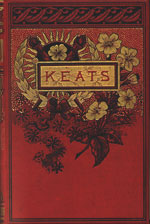 On Thursday, the poet who would “sooner fail than not be among the greatest” took a place of honor in the UNC library.

A first edition of Keats’ Poems, published in 1817, was dedicated as the 6 millionth volume in the library’s collection. With the addition, UNC becomes the 19th university library in North America to achieve the milestone.

The book is part of a 500-item Keats collection that the library purchased this year with support from the John Wesley and Anna Hodgin Hanes Foundation of Winston-Salem. Through its foundation, the Hanes family has funded each of the library’s millionth volumes. UNC librarians know of no other instances of the same donor funding every millionth book for the same library.

The event marked the opening of the free public exhibit “Presenting John Keats” in the Rare Book Collection of Wilson Library, to be displayed through March 31. It includes Poems and first editions of the two other books that Keats wrote in his short lifetime (1795-1821).

Highlights from the new collection also were exhibited Thursday, including Poems of John Keats (1894), printed by William Morris at the Kelmscott Press; Great Poems of John Keats translated into Hindi; and ornamental editions, such as the poem “Isabella or a Pot of Basil” rendered in an Art-Deco style by W.B. MacDougall in 1898.

“This [new] collection is a gem that provides precious finds for specialist scholars and graduate students,” said Jeanne Moskal, professor of English at UNC and editor of the Keats-Shelley Journal. She said that the collection also will fortify undergraduate education, noting that she regularly brings classes to the Rare Book Collection.

“With each visit, four or five students catch intellectual fire when they see early editions of authors they have studied,” Moskal said. “Keats is already a favorite among my students, who see him sharing their own emerging-adult issues of articulating a vocation and of discovering love and sexuality. These books will strengthen the vividness of that affinity.”

Besides the new Keats collection, the exhibit draws on the library’s other strong collections of English Romantic writers of the late 18th and early 19th centuries. The latter provides context for Keats and his work, said Rare Book Collection librarian Libby Chenault ’83 (MSLS, ’91 MA and ’02 PhD).

A selection of Keats editions are on display with works by writers who inspired Keats; remembrances of the poet by contemporaries, including Percy Bysshe Shelley and Lord Byron; and notable editions of authors influenced by Keats.

While Keats was little appreciated in his day, a proliferation of elegant “gift books” and anthologies in the 19th and 20th centuries eventually placed him back in the eye of the public, Chenault said. Increased critical attention in the second half of the 19th century cemented his place in the literary canon.

In a 21st-century twist, the library will digitize selections from the new 500-item collection and make them freely available on the Web through an ongoing arrangement with the Internet Archive.

“Books are our special heritage,” said Sarah Michalak, University librarian and associate provost for University libraries. “By celebrating this remarkable collection as our 6 millionth volume, we honor a major milestone and a truly generous tradition of the Hanes family.”