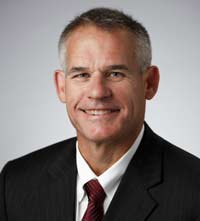 Douglas A. Shackelford ’80, who is Meade H. Willis Distinguished Professor of taxation and associate dean of the MBA@UNC program, will be the next dean of Kenan-Flagler Business School.

Chancellor Carol L. Folt and Executive Vice Chancellor and Provost James W. Dean Jr. selected Shackelford following an international search and the work of a search committee led by Susan King, dean of the School of Journalism and Mass Communication. The Board of Trustees approved Shackelford’s appointment this week, and he will start work Feb. 1.

Shackelford succeeds Dean, who served as dean from 2008 until he became provost last July. John P. Evans has been serving as interim dean since then.

Shackelford, Dean said, “is a seasoned academic leader and an internationally recognized scholar and business educator.”

A North Carolina native, Shackelford has served on the Carolina faculty since 1990. He is an award-winning researcher and teacher whose work focuses on taxes and business strategy.

Shackelford has been associate dean of MBA@UNC, the school’s online MBA program, since 2010. He was senior associate dean for academic affairs from 2003 to 2007 and associate dean of the master of accounting program from 1998 to 2002. He is director of the UNC Tax Center, which he founded in 2001.

After he graduated, he worked as a senior tax consultant for Arthur Andersen & Co. in Boston and Greensboro from 1981 to 1985. He then earned his doctorate from the University of Michigan and joined the UNC faculty.

Shackelford is a research associate in public economics at the National Bureau of Economic Research. He has held visiting faculty positions at Stanford University, Universiteit Maastricht in the Netherlands and the University of Oxford.