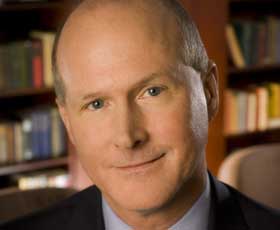 James W. Dean Jr., a longtime faculty member and dean of the Kenan-Flagler Business School, has been appointed UNC’s next executive vice chancellor and provost.

The Board of Trustees on Thursday approved a joint recommendation for Dean from Chancellor Holden Thorp ’86 and Chancellor-elect Carol Folt. Dean will start in the new post July 1.

Dean, also professor of organizational behavior and a Sarah Graham Kenan Distinguished Scholar, will succeed Bruce Carney, who has served as provost since 2009, including one year in the post on an interim basis. Carney is returning to the physics and astronomy faculty and his research.

The executive vice chancellor and provost is the University’s chief academic officer and oversees the professional schools, the College of Arts and Sciences, the University Library and a number of other academic-related units.

“Jim is an accomplished scholar and outstanding educator,” Folt said. “He is respected widely for his visionary leadership of the Kenan-Flagler Business School and for the innovative and interdisciplinary approaches he takes to ensure excellence in research, education and public service.”

“I am honored to take on this important leadership role at UNC, and I am excited about the contributions that I believe I can make to our great university,” Dean wrote in an email to the Kenan-Flagler community.

“I especially want to thank you for your support in helping me achieve my vision for UNC Kenan-Flagler as a top global business school whose graduates are known for their effective and principled leadership as well as their technical and managerial skills, and that produces research with impact, serves as a valued member of the UNC community, and contributes to the welfare of North Carolina and the world beyond its borders.”

Thorp appointed a campus search committee, chaired by nursing school Dean Kristen Swanson, that started its national search in January and coordinated closely with Folt after her appointment as chancellor-elect in April.

Dean has been Kenan-Flagler’s dean since 2008. Thorp said Dean has positioned the school as a leading global business school, a valued member of the campus community and a major contributor to the welfare of North Carolina, the nation and the world.

Previously, Dean served in the school’s top academic position, senior associate dean for academic affairs, for a year. He also was associate dean of executive development from 2002 to 2007 and associate dean of the master’s of business administration degree program from 1998 to 2002. Dean joined the business faculty in 1997.

Leadership, organizational change, strategic decision making, international management, and organizational performance improvement are the focus of Dean’s research, teaching and consulting. He has published in many of the top academic and business journals. Dean was program director of the National Science Foundation research program, Transformations to Quality Organizations, jointly sponsored by the government and the private sector, and served as an examiner for the Malcolm Baldrige National Quality Award for six years.

He earned his doctorate and master’s degrees in organizational behavior from Carnegie Mellon University. He received his bachelor’s degree from The Catholic University.

An interim dean will be announced later, along with plans for a search committee to identify Dean’s successor.