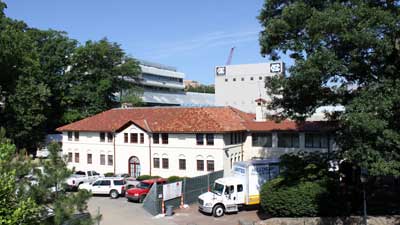 Work is under way to replace the Spanish colonial Kenan Field House, which dated to 1927, with a $70 million privately funded project that will close in the east end of Kenan Stadium with luxury boxes, an academic support center for athletes and other amenities. (Photo by Sarah Arneson ’96)

Wrecking crews began taking down Kenan Field House on June 10 to make way for a $70 million privately funded project that will close in the east end of Kenan Stadium with luxury boxes, an academic support center for athletes and other amenities. Approved by the trustees in May, the addition will add 2,980 seats to the stadium’s current 60,000-seat capacity.

All are expected to be in place for the start of the 2011 football season; the Spanish colonial Kenan Field House, built with the stadium in 1927, had been replaced by rubble within days. A photo-a-day of the site is available online. 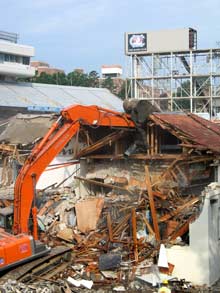 Sales of club seats and individual suites began in October. Those sales will provide about half of the funding. Private donations will fund the rest of the project.

“We are very pleased with the sales to date, and we’re even more excited about how our donors have stepped forward in recognizing the need to provide our student-athletes with a first-class academic and training center,” said John Montgomery, executive director of the Rams Club.

The academic center will be a 30,000-square-foot facility that will triple the size of the one that opened in 1986. It will include classrooms, computer labs, a writing center, auditorium, individual and group tutorial/conference rooms, and offices for the academic support staff, career services, community outreach, life skills and the Carolina Leadership Academy.

The strength and conditioning center will be housed at field level and will include 13,600 square feet of cardio and strength training equipment and a 40-yard track. That almost doubles the amount of space that is available currently.

The additional seating in the end zone, called the Blue Zone, offers 1,836 seats in the Concourse Club/Loge a few feet from the field, 824 seats in the Upper Club/Loge on the fourth floor and 320 seats in 20 suites on the fifth floor.

Although still distinctive by its stucco walls and terra cotta roof, on demolition day the field house actually bore little resemblance to the original building. An addition was built across the back in 1958; in 1964, wings were added to either side that broke sharply from the original architectural style; in 1977, the courtyard on the front of the building between the two original wings was filled in; and a large Student Athlete Development Center was added on the north side in 1986.

Considering the building boom on campus over the past decade, relatively few buildings have been demolished. In the past 15 years, Carolina has lost: