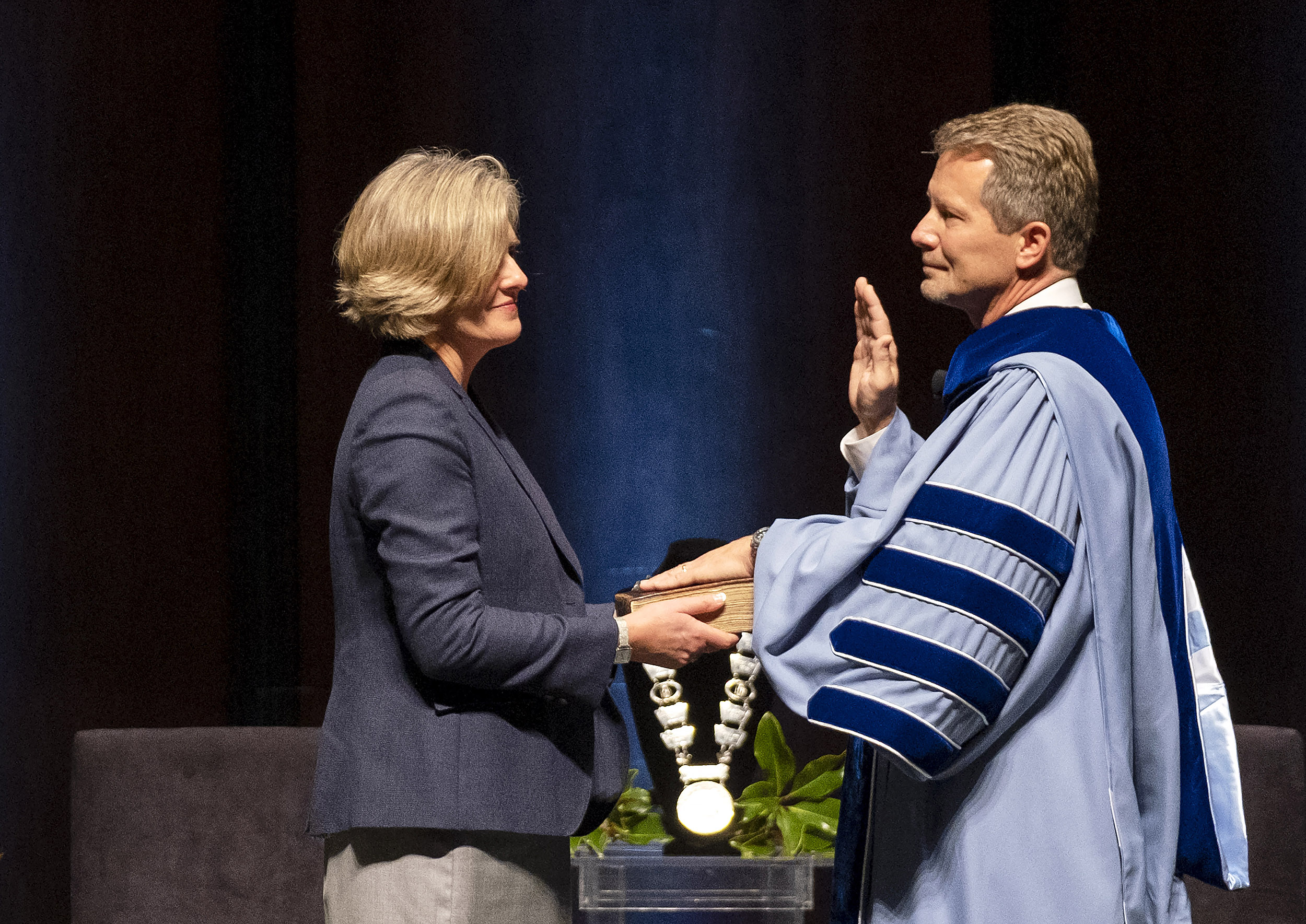 Amy Guskiewicz participates as Kevin M. Guskiewicz is installed as the 12th Chancellor of the University of North Carolina on the eve of University Day, which marks the birth of the University and of public higher education in America. It commemorates the Oct. 12, 1793, laying of the cornerstone of Old East. (UNC/Jon Gardiner ’98)

On Sunday, as part of a two-day University Day observance, Kevin Guskiewicz took the public oath that officially installed him as 12th chancellor of the University, the job he already had been doing for nearly 20 months, first on an interim basis, then as the permanent choice of the UNC System Board of Governors. Since he arrived in Chapel Hill as a faculty member in 1995, Guskiewicz had progressed to department chair, center director, senior associate dean and then dean of the College of Arts and Sciences.

‘The Happiness of the Rising Generation’

Read the keynote address delivered by Chancellor Kevin M. Guskiewicz during the Oct. 11 ceremony installing him as Carolina’s 12th chancellor.

Along the way, Guskiewicz also attracted national attention, receiving the MacArthur Fellowship (sometimes called the “genius grant”) and being named one of 18 “game changers” by Time magazine for his concussion research. He is founder and co-director of UNC’s Matthew Gfeller Sport-Related Brain Injury Research Center as well as director of the University’s Center for the Study of Retired Athletes. His research has influenced concussion protocols for the NFL and the NCAA as well as the Return to Play laws now in effect for younger athletes in all 50 states.

“Long before concussion research was a topic of interest to the world, Dr. Guskiewicz was the first one in, doing amazing work. He is on our Mount Rushmore for former NFL players,” said Andre Collins, former NFL player and executive director of NFL Players Association’s Professional Athletes Foundation. He is the players’ union’s liaison with the retired athletes center.

Just six weeks into his tenure as chancellor, Guskiewicz faced a difficult decision. A new and deadly virus threatened to spread rapidly through the campus when students returned from spring break. The veteran researcher gathered the facts, consulted the experts and campus colleagues and then quickly did what none of his predecessors had ever done in the University’s 227-year history: switched the nation’s oldest public university to remote-only instruction.

“I love bold action,” Guskiewicz said recently. “And I do think that we have been bold.”

“He is incredibly driven and intense about what he does, but it’s also clear that Kevin cares about people,” said Michael Crimmins, the chemistry professor who preceded Guskiewicz as senior associate dean for the natural sciences. “He’s always thinking about how does this affect individuals as well as how does it accomplish his big picture idea.”

UNC System President Peter Hans ’91 presided over Sunday’s event, which was aired on the University’s YouTube channel with live and recorded content, including remarks from Gov. Roy Cooper ’79 (’82 JD); Board of Trustees Chair Richard Stevens ’70 (’74 MPA, ’74 JD), who also is a former chair of the GAA Board of Directors; GAA Board of Directors Chair Jill Silverstein Gammon ’70 (’72 MSW); and faculty, staff and student leaders. In a keynote address, Chancellor Guskiewicz shared his vision for the University’s future. Live attendance was restricted due to COVID-19. 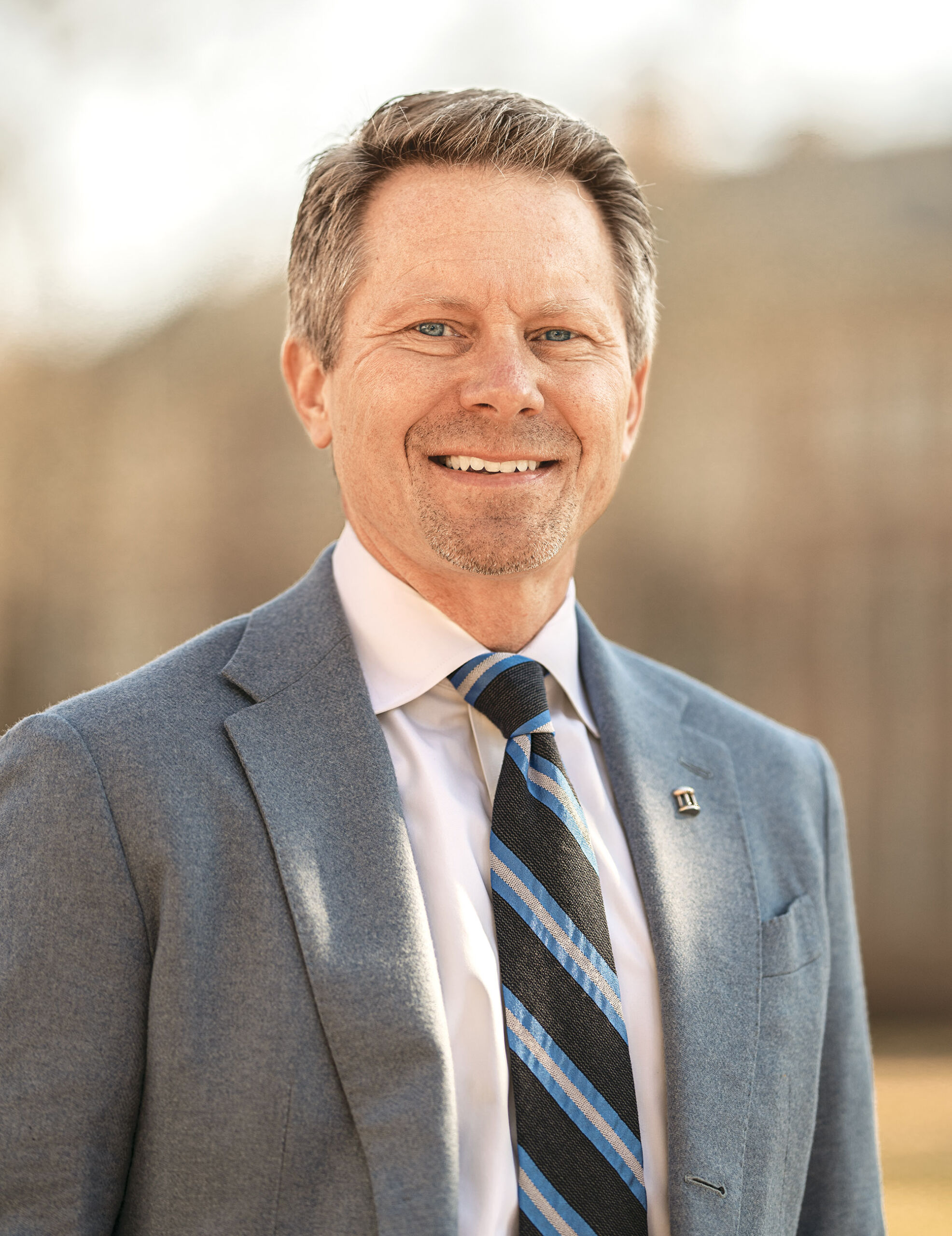 Guskiewicz grew up a smart, sports-loving kid in Latrobe, Pa., a hardscrabble town in the western part of the state and hardcore Pittsburgh Steelers country. As a high school player, he spent more time injured than on the field, which sparked an interest in sports medicine. He earned a bachelor’s degree in athletic training from West Chester University and studied for a master’s degree in exercise physiology from the University of Pittsburgh while working as an athletic trainer for his beloved Steelers.

Seeing the unscientific guesswork behind decisions about whether to send players with concussions back into games prompted him to study concussions as a doctoral student at the University of Virginia. He continued his research on concussions and balance at Carolina, where he worked with coaches and players to put science behind deciding fitness to play. He wasn’t trying to shut down football; he wanted to make it safer.

As his reputation as a neuroscientist and concussion researcher grew, so did the number of students who wanted to work with him. Associate professor Jason Mihalik ’09 (PhD), now co-director of the Gfeller Center, was one of those, impressed that Guskiewicz responded to an email he sent as an undergraduate in Montreal. When Mihalik came to Carolina as a graduate student in 2004, Guskiewicz was chair of the exercise and sport science department.

“He’s fantastic to work with. He is unmatched in his work ethic. I once joked that he doesn’t sleep, that he plugs himself into the wall at night,” Mihalik said.

The scope of Guskiewicz’s job broadened widely when he became chancellor. Taking over amid the controversy over UNC’s Confederate monument, he found himself dealing with issues of history and race and with campus safety. He established commissions for those areas and conducted listening sessions with groups across campus. As a result, the trustees voted this summer to change some University policies and removed the names of four white supremacists from campus buildings.

Earlier, in March, when Guskiewicz made the difficult decision to switch to remote instruction, it meant that the class of 2020, which included his son Nathan, had only a virtual celebration — until they can safely gather on campus for a Commencement ceremony.

Guskiewicz faced an even tougher decision in the fall. He and his leadership team spent the spring and summer developing a plan to bring students back to campus for the fall semester.

Over the summer, research labs reopened and some graduate and professional students returned to class with no COVID-19 outbreaks. With community standards and practices based on expert advice from the University’s own infectious disease research faculty, Carolina prepped for resuming on-campus instruction.

Only a week into classes, the University announced clusters of infections at some residence halls and a fraternity, and the weekend brought even more cases.

“That pivot in August was the hardest decision I’ve made,” he said.

Within days, most residential students had moved back home or off campus, leaving Carolina’s classroom buildings and grassy quads abandoned.

Yet the University is still open, with its largest enrollment ever.

And Guskiewicz, after his physically distanced installation, will face the same decision for the third time — to instruct students in person or virtually — for the spring semester.

“These past six months, we’ve traveled quite a journey. We’ve learned from some things that didn’t work. So I want to look back on that road we’ve traveled but, more importantly, make sure people are focused on the road in front of us,” he said.

University Day, UNC’s 227th birthday, was observed Monday without the traditional ceremonial event in Memorial Hall, but via the University’s own media and social media platforms. Classes were held as scheduled.

On Monday, the University presented Distinguished Alumna and Alumnus Awards to six recipients:

University Day marks the birth of the University and of public higher education in America. It commemorates the Oct. 12, 1793, laying of the cornerstone of Old East.

Portions of this article were written by Susan Hudson ’84 and originally appeared in The Well, UNC’s online news site for faculty and staff.