The iconic Coker Arbor along East Cameron Avenue, site of many wedding and graduation photos,... 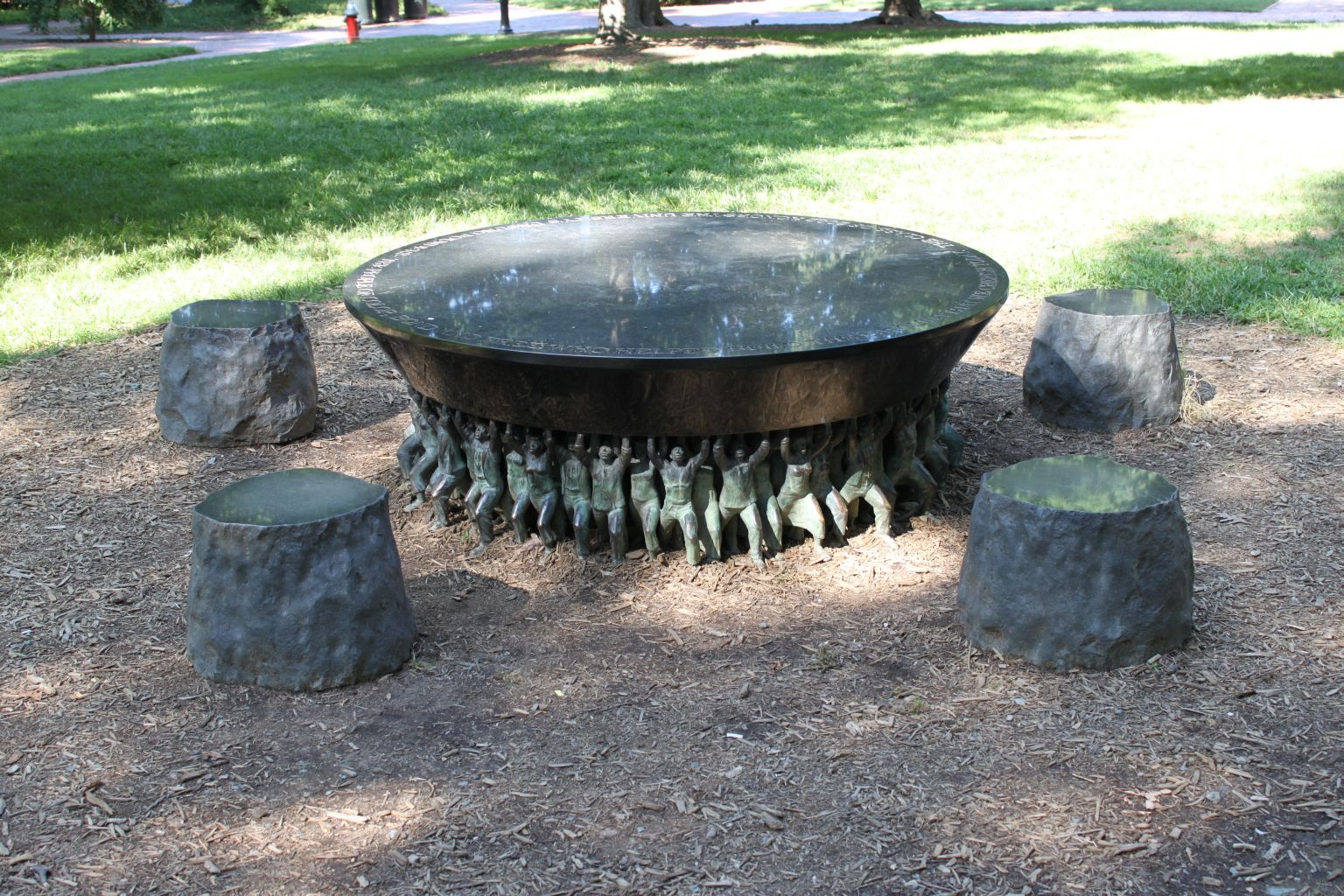 The Unsung Founders Memorial, unveiled on McCorkle Place in 2005, was a gift from the class of 2002 that “honors the University’s unsung founders — the people of color bond and free – who helped build the Carolina that we cherish today,” according to its inscription. (UNC photo)

The following Monday, Chancellor Kevin Guskiewicz responded in a message to the Carolina community: “Two individuals came to our campus and expressed gross, violent and offensive words and actions at the Unsung Founders Memorial.

“These words and actions threaten the sense of belonging that we are working to cultivate on our campus and do not represent our values,” Guskiewicz said. “I unequivocally condemn this abhorrent behavior.”

Guskiewicz added that he had “expanded security around the Memorial, including putting up fences and increasing our police presence.”

The men, identified by The News & Observer as Thomas May and Joseph Wardwell, were caught on a video posted to the Twitter account UNC Anti-Racist Alerts sitting on the memorial and walking around it while shouting racist remarks. Smaller yard flags with the Confederate symbol also were planted around the structure. In the video, May can be heard wishing he “had a couple of slaves” and making a whipping motion with his arm.

UNC Anti-Racist Alerts is not affiliated with the University. Four law enforcement officers responded to the scene, according to news reports, but no vandalism was found.

“As UNC-Chapel Hill is a public university and state agency, we must allow demonstrations and free speech, in accordance with the First Amendment and North Carolina Campus Free Speech Act, even when it does not align with the values of our campus,” George Battle ’95, vice chancellor for institutional integrity and risk management, said in a statement released to news outlets on July 12. Battle also received his law degree from UNC in 1999.

May and Wardwell have a history of counter-protesting at Black Lives Matter events in the state, according to The N&O.

At a previously planned demonstration on July 12 at South Building, Julia Clark, who is vice president of the Black Student Movement, pointed to the Confederate flag-holders’ presence as another sign of needed campus reform around race and safety.

“White supremacists feel safer on campus than Black students,” Clark said in her remarks to the crowd.

The UNC chapter of the NAACP had organized the demonstration at South Building to “stand in solidarity with those assaulted by the UNC Police Department and protest against the promotion of Rahsheem Holland to UNC Campus Chief of Police,” according to the group’s Instagram account. During a special session called by the Board of Trustees on June 30 to discuss tenure for Pulitzer Prize-winning journalist Nikole Hannah-Jones ’03 (MA), video gathered by news outlets at the scene showed Black student protesters, unfamiliar with board protocol, were forced out of the room by law enforcement during a closed session.

Clark alleged to have been struck in the face by interim police Chief Rahsheem Holland. (Holland received his certificate in community preparedness/disaster management from UNC in 2013.)

A coalition of Black students, faculty and staff submitted a list of reforms meant to increase safety and equity at UNC to Guskiewicz on July 7. Guskiewicz responded, saying he would create a “Campus Climate Plan to address the concerns.”

The Unsung Founders Memorial, unveiled on McCorkle Place in 2005, was a gift from the class of 2002 that “honors the University’s unsung founders — the people of color bond and free — who helped build the Carolina that we cherish today,” according to its inscription.