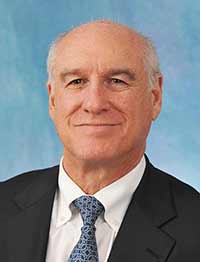 In 2011, HIV prevention research led by UNC Professor Myron Cohen showed such stunning results — 96 percent reduction in HIV transmission in couples through antiretroviral therapy — that the results were released four years before the study’s scheduled completion.

Now there is news of more progress with the study known as HPTN 052: The drug cocktails provide lasting protection against the sexual transmission of the virus from infected men and women to their HIV-uninfected sexual partners. The results were reported July 20 at the 8th International AIDS Society Conference on HIV Pathogenesis, Treatment & Prevention in Vancouver, Canada.

“These findings demonstrate that antiretroviral therapy, when taken until viral suppression is achieved and sustained, is a highly effective, durable intervention for HIV prevention,” said Cohen, who leads UNC’s Institute for Global Health and Infectious Diseases, and is principal investigator for the study. “The HPTN 052 trial was designed to address two questions: whether providing antiretroviral therapy to an HIV-infected person would prevent HIV transmission to a sexual partner, and whether earlier antiretroviral therapy offered long-lasting health benefits, and the answer to both is a resounding ‘yes’.”

The study began in 2005 and enrolled 1,763 couples in which one person is HIV-infected and the other is not, at 13 sites in nine countries. Ninety-seven percent of the couples were heterosexual. HIV-infected partners were assigned to start antiretroviral therapy at the beginning of the study, called the “early” arm, or later in the study, called the “delayed” arm. Those on the delayed arm started the therapy when their bodies’ immune systems were declining. HPTN 052 was funded primarily by the National Institute of Allergy and Infectious Diseases, part of the National Institutes of Health.

After the release of the results in 2011, all participants in the delayed arm were offered the opportunity to begin the therapy, and the study continued for four more years. By the end of the study, 1,171 couples remained in follow-up.

“These results have important implications for programs seeking to combine other HIV-prevention measures with treatment as prevention,” Cohen said. “In the setting of such programs, special efforts should be made to minimize HIV transmission risk before viral suppression has been achieved, to maintain suppression on [the drugs], and to identify and address [therapy] failure.”

The research earned Cohen the Breakthrough of the Year award from the journal Science in 2011.

The editors of Science said at the time, “In combination with other promising clinical trials, the results have galvanized efforts to end the world’s AIDS epidemic in a way that would have been inconceivable even a year ago.”

In May of this year, the University and the global pharmaceutical and health care company GlaxoSmithKline announced the creation of a dedicated HIV Cure Center and a jointly owned new company that will focus on discovering a cure for HIV/AIDS.

This public-private partnership aims to redefine the traditional way of conducting research and create a new model to seek the breakthroughs needed to tackle an extraordinarily challenging global health issue. The HIV Cure Center will be located on the UNC campus.