A new gift will enable UNC to build a 30,000-square-foot addition to Fetzer Hall that will enable the Matthew Gfeller Sport-Related Traumatic Brain Injury Research Center and the Center for the Study of Retired Athletes...

An anonymous donor has set a $10 million challenge to support UNC’s Morehead-Cain Scholarship, one of the preeminent merit scholarship programs in the world. If met, the Give Together Scholarship Challenge will be the largest...

Walter Hussman Jr.’s family has been in the newspaper business since 1909. Hussman, who started working at the Camden News in Arkansas at age 10 and is a 1968 graduate of Carolina’s journalism school, has put...

The Morehead-Cain Foundation is endowing a new merit scholarship at Carolina in honor of Eve Carson ’08.

The Chapel Hill-based foundation has given $400,000 to UNC to establish the Eve Marie Carson Carolina Way Scholarship, which will cover tuition, fees, and room and board for an undergraduate beginning as soon as 2011-12. A new recipient will enroll every four years. 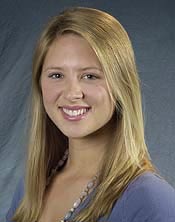 The scholarship also will provide the student with special programming, including research grants, summer enrichment opportunities and study abroad. Preference will be given to out-of-state applicants.

Carson, UNC’s former student body president who was killed in March 2008, was a Morehead-Cain Scholar from Athens, Ga.

Recipients will be chosen for academic excellence, observable optimism and enthusiasm, and a proclivity to connect and engage diverse people. “Eve was extraordinary in many ways, but these qualities made her particularly special to the Morehead-Cain program and the University,” said Chuck Lovelace ’77, executive director of the Morehead-Cain Foundation.

The name of the Eve Marie Carson Carolina Way Scholarship was inspired by Carson’s habit of referring to the “Carolina Way.” She and James Moeser, UNC’s chancellor during Carson’s student days, defined it as “excellence with a heart.”

“We are extremely pleased to include the ‘Carolina Way’ in the name of the scholarship, because Eve so perfectly embodied the passion, generosity and commitment that it represents,” said Megan Mazzocchi ’82, associate director of the Morehead-Cain Foundation. “Eve believed fully in the unique character of the Carolina community and tried in everything she did to live up to the Carolina Way and inspire those around her to do the same.”

Along with being student body president at Carolina, Carson was co-president of the Honors Program student executive board, a member of Phi Beta Kappa and a member of the North Carolina Fellows leadership development program. She also tutored science in the local public schools and captained several intramural sports teams.

Carson studied abroad in Cuba and, through the Morehead-Cain summer enrichment program, spent her college summers in Wyoming, Ecuador and Egypt.

She was posthumously awarded the Chancellor’s Award for most outstanding woman in the senior class and the UNC General Alumni Association’s Distinguished Young Alumni Award.

This is the second UNC scholarship to honor Carson. The first, the Eve Marie Carson Memorial Junior-Year Merit Scholarship, funds a summer experience for students after their junior year and financial aid for their senior year.