Bill Guthridge struggles to put his feelings into words. 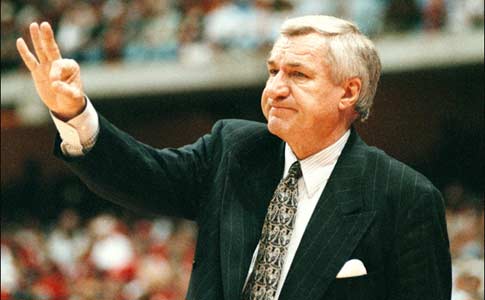 Every week, he sees his longtime friend and former boss in the office, as he has since he joined the coaching staff of the Carolina basketball team in 1967.

He and former head coach Dean Smith worked together longer than most marriages last. And in a way, they raised a family as well, connected by an unusual, unbreakable bond.

“He is a great man and it was great to be with him,” Guthridge said. “I think all the players who have played for Dean Smith and I appreciate what he did for them, and for basketball, and for Carolina. It was something to be able to see that through all the years.”

Guthridge can accept that those years are history. When he and Smith came to Carolina from Kansas, neither dreamed that they would build a basketball program that would become a sports dynasty – as respected by Carolina’s foes as it was beloved by its legion of fans.

What is harder for Guthridge to take is that his friend is no longer fully here. The legendary memory – that indispensable instrument behind Dean Smith’s genius and charm – is gone now, too.

Smith had a way of making people feel that they mattered to him, that they were as important to him as he was to them, just by taking the trouble to remember their names, Guthridge said.

“He had a real gift,” Guthridge said. “Many times, he and I would be walking to the locker room and somebody would approach us. Before the person opened his mouth, Dean would say, ‘Hey, Joe, how are Mabel and the kids doing?’ It has been so sad to see that gift deteriorate over the past six or seven years.”

This Wednesday, members of Smith’s family will be present for him at the White House when President Barack Obama awards Smith the Presidential Medal of Freedom, the nation’s highest civilian honor.

As a teacher, Smith was a model of integrity; as a political activist, he exemplified social and moral conscience.

Other than his wife, perhaps no one knows that side of Smith better than Robert Seymour, who was pastor of the Olin T. Binkley Memorial Baptist Church for 30 years. Seymour met Smith when he came to Chapel Hill in 1959 to help found the church.

At the time, Smith was in his second year as an assistant coach under Frank McGuire. He joined the church in its first year, primarily because it included everyone, Seymour said.

In 1959, Chapel Hill still had a segregated school system, and it wasn’t until 1961, the year Smith took the reins as head coach, that the system would become the first in the state to activate a plan for voluntary integration.

“People think of Chapel Hill as this liberal place, but back in the late 1950s and early ‘60s, it was as rigidly segregated as Mississippi,” Seymour said.

A few years later, people staged marches and sit-ins to integrate restaurants and movie theaters, but The Pines restaurant, where the basketball team ate its program meals, was already integrated.

Smith, when he was still an assistant coach, walked to the restaurant with Seymour and a theology student from Binkley, who happened to be black. Then they did something radical for the day: The three stood by the door waiting to go inside.

“The manager looked through the door and saw that we were there,” Seymour said. “There was a look of consternation, but the door finally opened and we were served like everybody else.”

Smith’s next big church assignment came a few years afterward, Seymour said. “We said, ‘Dean, your assignment is to find the best black player you can find and integrate the ACC.’”

Smith continued to support civil rights, champion education and fight against the death penalty for the rest of his public life.

In the 1960s, he protested the Vietnam War; in the early 1980s, he recorded radio spots to promote a freeze on nuclear weapons; and in 1998, he appeared at a clemency hearing for a death-row inmate and told then-Gov. Jim Hunt, “You’re a murderer. And I’m a murderer. The death penalty makes us all murderers.”

Fred Hobson, a retired UNC English professor who played on the all-white freshman basketball squad the same 1961–62 season Smith took over as head coach, said Smith got involved “not because he wanted to necessarily, but because he felt he had to. His father had led school integration in Kansas when he was growing up and carried that same deep sense of moral right and wrong. He simply had a firm desire to do the right thing and take a leadership role. ”

That sense of right and wrong led Smith on and off the court.

“To be quite frank,” said Hobson, “many of the people who idolized him in the state did not know his politics and would not have agreed with them if they had. So what everyone saw in him was not his politics. It was simply his leadership – that calm in the face of crisis.”

And he did it without ever talking to his players about winning, said two former players, Phil Ford and Eric Montross.

“I don’t think people really know the depth of his intelligence,” said Ford, who finished his career as the all-time leading scorer for Carolina (surpassed only by Tyler Hansbrough in 2008). Ford also started on the U.S. Olympic team that won a gold medal under Smith in 1976 and later served as an assistant coach for Smith following his NBA career.

“Coach Smith would have been great in whatever profession he chose, whether it be a politician or a banker or a scientist or a mathematician,” Ford said.

Montross, who played center on the 1993 championship team, said Smith didn’t want the team to look at the scoreboard so they wouldn’t focus on the score. Montross, former chair of the General Alumni Association Board of Directors, is the color commentator on Carolina’s radio broadcasts.

“Coach Smith always said, ‘If you play the way you are supposed to play, the way your coaches have taught you, you will win,’” said Montross.

Although Smith was known as a master strategist in the waning seconds of close games, what Montross remembers is the confidence Smith infused in his players during those tense situations.

He recounted the talk Smith gave the team when it was down by 21 points in the second half during a home game with Florida State: “He brought us in and said, ‘OK, here’s what we want to do and here’s how we are going to do it. By the 16-minute timeout, we’re going to have the lead cut down to 15. By the 12-minute timeout, we’ll have it down to 10.”

Smith’s calm command is what gave his teams an edge, Montross said. “It allowed you to focus on what you were supposed to do and made you believe you could do it.”

Hobson said Smith’s Midwestern egalitarian spirit kept him from believing he was as special as the people around him insisted he was.

Another longtime professor who saw that aspect of Smith up close is retired history professor Willis Brooks.

Smith never tried to make himself feel bigger than he was by making others feel small, Brooks said. Instead, his gift was making people feel they mattered to him – because in his eyes everyone did matter.

Brooks recalled the time that he arrived at Smith’s office to see if he would sign a political cartoon showing Smith with a gold medal around his neck after leading the U.S. basketball team to victory in the 1976 Olympics. The signed cartoon, Brooks explained, was to be a gift for his wife’s birthday.

Smith didn’t just sign it, Brooks said. He got Walter Davis, Mitch Kupchak, Phil Ford and Bill Guthridge to sign it, too, and then arranged for Brooks and his wife to see a film of the gold medal game at the Smith Center.

“Whenever anyone asked anything of Dean, he did more than they asked,” Brooks said.

Montross described his former coach as a shy man who learned to endure adulation with a warmth and generosity that left him shaking his head in wonder.

“He certainly sought privacy, but dealt with publicity,” Montross said. “It wasn’t because he didn’t appreciate the attention, it was because he just wasn’t comfortable with people thinking he was all that. He had a reverence for humanity, such a love for people, that to have someone thinking he was better than others – that he was deserving of this extra attention – bothered him.”

Smith always tried to redirect the spotlight from himself to others, especially his players.

Montross remembers being with Smith in his office when he was working through the latest pile of letters on his desk and asking if all the attention he received ever bothered him.

“He said, ‘Eric, one day it is going to end so you might as well enjoy it while it lasts.’ I get chills thinking about how many times I’ve used that line, because every time I say it, I think about him telling me that.”

“I was very fortunate and blessed to be recruited by Coach Smith and extremely blessed to have him in my life,” Ford said.

Montross played for six teams throughout his NBA career, and invariably, players from each team would ask him what it was about Carolina that made former players return to Chapel Hill in the summer.

“It was because of Coach Smith and the genuine sense of love and caring for his players that no one doubted,” Montross said. “We wanted to come back to that feeling of belonging. He was just a marvelous, marvelous man and that is the great tragedy of right now for him.”

In 1998, Smith received the Arthur Ashe Courage Award. It was an award he refused the year before when Ashe’s widow had called to offer it to him, Seymour said.

“He told me, ‘I don’t feel like I am courageous. I just do what I think is right,’” Seymour said.

The next year, when the award was offered again, Seymour made sure his friend did not make the same mistake.

“I said, ‘It is a rare coach who is willing to take a public stand on so many controversial issues as you did. Now, Dean, that is courage and you should accept that award.’ And he did.”

No doubt, if he were present at the White House to receive this latest award, he would accept it with the same shy reluctance, the same sense of humility that through the years had allowed his heart to grow bigger than his ego.

No doubt, he would also be the sole doubter in the room about whether he was worthy of the honor.

And it would be one of the rare times in his life Dean Smith would have been wrong.