H.R. McMaster ’94 (MA, ’96 PhD), the lieutenant general President Donald Trump picked on Monday to be national security adviser, often has been described in this week’s ensuing media coverage as a scholar-warrior, earning his hard-charging reputation on the battlefield and on the best-seller list.

The New York Times, The Washington Post and other national media have recounted McMaster’s military triumphs, including commanding a tank unit in a decisive battle in the Persian Gulf War in 1991 and a successful anti-insurgency campaign in Iraq in 2005.

Between those deployments, the decorated combat veteran spent time in the classrooms and libraries at Carolina, researching how the military brass dealt with presidents and political leaders during the Vietnam War. His verdict on their performance was summed up in his doctoral dissertation, From Distrust to Deceit: The Joint Chiefs of Staff, Civil-Military Conflict, and Planning the Escalation of American Military Intervention in Vietnam, 1961-1964. That academic effort evolved into his 1997 book, Dereliction of Duty: Lyndon Johnson, Robert McNamara, the Joint Chiefs of Staff, and the Lies That Led to Vietnam.

After Trump picked McMaster — who has served as director of the Army Capabilities Integration Center at Fort Eustis in Virginia since 2014 — to lead the National Security Council, the book hit No. 1 on Amazon and other best-seller lists and a division of the original publisher, HarperCollins, announced it was ordering a new paperback printing of 25,000 copies. 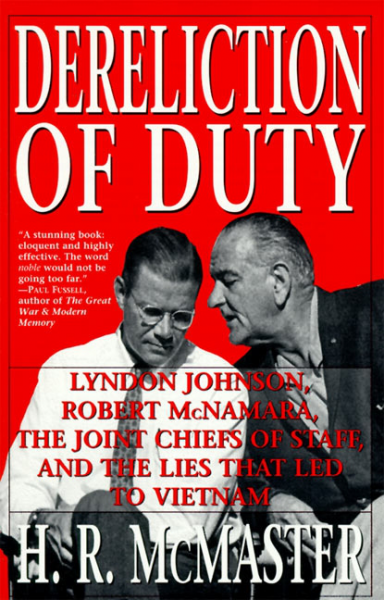 In Dereliction of Duty, the West Point graduate explains why he chose his research topic at Carolina.

“It would be impossible for an Army lieutenant, obtaining his commission in 1984, not to be concerned with the experience of the Vietnam War,” he wrote. “I thought that to better prepare myself to lead soldiers in combat it was important to learn from the experiences of others, and the most recent U.S. war seemed as good a starting place as any.”

McMaster writes that at the time he was commissioned, the Army barely mentioned Vietnam, with emotions about the sacrifices in that war running too deep to allow veterans to dwell on it.

The accounts he read of the futility of Vietnam contrasted with the clear objectives of the Persian Gulf War in 1991, he wrote. “I wondered how and why Vietnam had become an American war — a war in which men fought and died without a clear idea of how their actions and sacrifices were contributing to an end of the conflict. When I arrived at Chapel Hill, North Carolina, in 1992 to begin my graduate work in American history, I began to seek answers to those questions.”

He pored over newly available declassified documents, manuscript collections and the official history of the Joint Chiefs of Staff during the war, gaining access to thousands of documents previously unavailable to researchers and historians.

“Interviews with those close to the decision-making process, taped meetings and telephone conversations, and oral histories and memoirs of top civilian and military officials who served during this period placed the documentary record in the context of personalities and advisory relationships,” McMaster wrote in Dereliction of Duty.

“The discoveries astonished me, and I felt compelled to share them with others.”

In the resulting dissertation, McMaster described how a breakdown in the relationship between military and political leaders led to an ill-fated war.

“This paper will argue that the Joint Chiefs of Staff had little influence over the effort to devise a strategy for American military intervention in Vietnam,” McMaster wrote. “The estrangement of the JCS from the Secretary of Defense and the President led to the curious situation in which the nation’s leaders developed a blueprint for war without the benefit of effective advice from the organization given statutory responsibility as ‘principal military advisors’ to the President, the Secretary of Defense, and the National Security Council.”

McMaster named names and dissected critical junctures where President Johnson and his small circle of civilian advisers cajoled, misled, manipulated, isolated and otherwise co-opted military leaders. The military men in turn fell short, often on their own, of their legal responsibility to offer their best military advice, instead putting up little or no resistance to what they knew was a flawed war strategy, sometimes using their acquiescence to benefit their individual branches.

Even so, McMaster writes in his book: “Assessing blame for the disaster in Vietnam, however, is beside the point. Much more important is to determine how and why key decisions were made, decisions that involved the United States in a war that it could not win at a politically acceptable level of commitment.”

By the end, he concludes: “The failings were many and reinforcing: arrogance, weakness, lying in the pursuit of self-interest, and above all, the abdication of responsibility to the American people.”

In his new job, McMaster will lead the National Security Council, charged with delivering his own “effective advice” to the president on policies addressing the country’s current challenges with Iraq, Afghanistan, Syria, the Islamic State, China, Russia, Iran and North Korea, among others.

Many analysts and commentators have noted that McMaster has had little experience with Washington politics, and that could be his biggest challenge. Then again, he wrote the book about the dangers military leaders face on that particular battlefield.