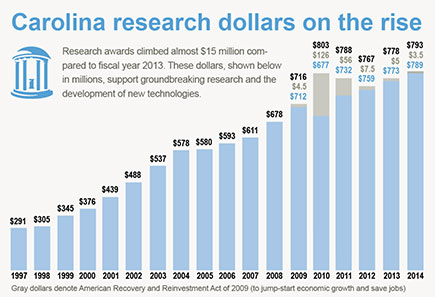 The largest sources of funding for Carolina’s research enterprise in 2014 came from the federal government, business and industry, and foundations.

Other federal entities awarded about $60.1 million. Awards from private industry totaled $44.3 million, up $1 million from a year earlier.

“Our researchers create technologies and innovations that are catalysts for new industries, accelerate progress toward a cure for diseases such as AIDS and help target U.S. spending on global health threats,” said Chancellor Carol L. Folt.

Research centers and institutes played a critical role in bringing together scientific teams to win about $141.5 million, or almost 18 percent of the total $792.7 million.

Examples of major research awards and findings from fiscal 2014 include: