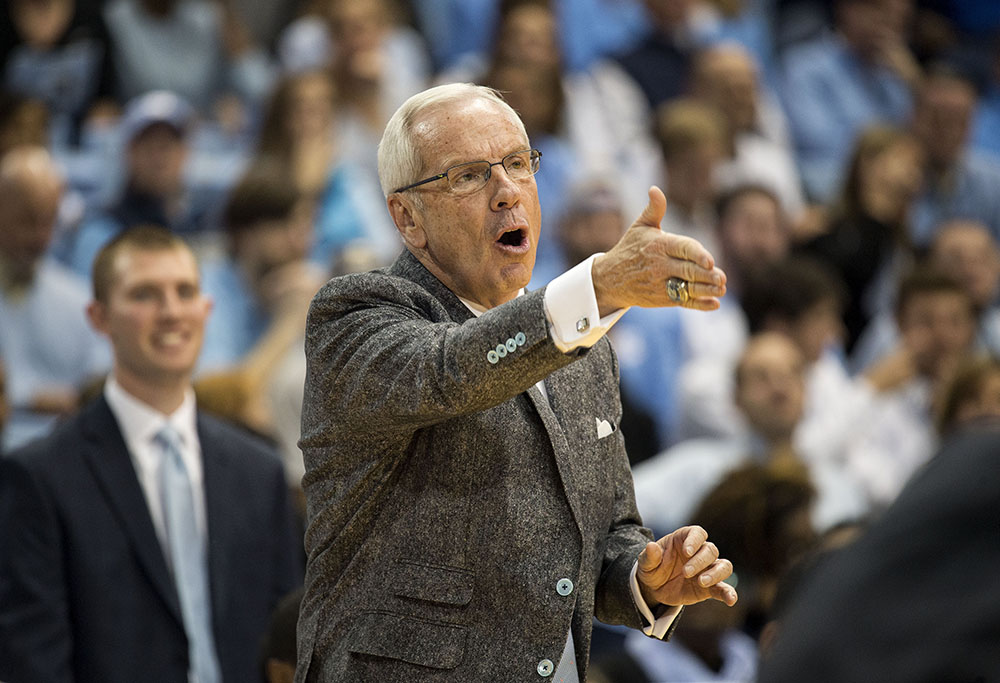 The playing floor in the Dean E. Smith Center will be named to honor Coach Roy Williams ’72. Roy Williams Court will be dedicated at a men’s basketball reunion on Aug. 24.

Williams has led the Tar Heels to three NCAA championships — in 2005, 2009 and 2017. The Asheville native, who also earned a master’s degree from Carolina in 1973, has coached basketball for 45 years: five years at Owen High School in Swannanoa and 40 at the collegiate level. He was an assistant to Dean Smith at Carolina for 10 years and was the head coach at Kansas for 15 years before returning to Carolina as head coach in 2003.

“Coach Williams is one of college basketball’s greatest coaches ever,” said Bubba Cunningham, UNC’s director of athletics. “But I’ve come to see that the measure of the man is his integrity, his honesty, the manner in which he relates to and supports his players, and the love he has for The University of North Carolina. He didn’t want this honor, but his players and our staff wanted it for him, and that says so much about why we will forever celebrate the game of basketball at Carolina on Roy Williams Court.”

Williams, who was inducted into the Naismith Memorial Basketball Hall of Fame in 2007, has led the Tar Heels to five Final Fours, eight regular-season Atlantic Coast Conference championships and three ACC Tournament titles.

“It’s very hard to believe; it’s just so flattering,” Williams said. “I have to figure out a way to thank all my current and former players, because it may be my name on the court, but it really honors all of them because they made the plays.

“I also want to thank my family for all the support and love they’ve given me over the years. I’ve missed many family things over the years, and they were so understanding. Naming the court will be a thrill for my family. I’ll try to say the right things to the former players, to my family and to the Carolina administration, but I don’t know if I will be able to adequately state how grateful I am.”

Chancellor Carol L. Folt said: “From the time I first met coach, I have been touched by his commitment to the success of his players and his belief in their capacity to dream big and accomplish even bigger. Generations of Carolina basketball fans have witnessed the result of his teaching and love for his players on the courts, but that is only part of his story as he cares so much and helps in so many ways here at Carolina and across our state. Naming the court for Coach Williams expresses our gratitude to this very special and much-admired Tar Heel.”

Former player Sean May ’09, who is UNC’s director of basketball operations, said: “This is an honor Coach Williams and his family truly deserve. Coach’s hard work and sacrifice over his 40-year dedication to the game are amazing to see, both from someone who played for him and now has the opportunity to work with him every day. Naming the floor for Coach Williams in an iconic building that is named for his mentor, Coach Smith, makes this even more special, not only for his family but all the Tar Heels who have played for him.”

Williams continued: “I love this place. For 15 years as the head coach and 10 as an assistant, I’ve tried every day to give everything I could to make the Carolina basketball program better. Fortunately, when I started I had Coach Smith, Coach [Bill] Guthridge and Eddie Fogler [’70; ’73 MA], who taught me everything about running a program.

“I think about my high school coach, Buddy Baldwin, the person responsible for getting me into the game and into coaching. I also think of Coach Smith. I turned 68 yesterday, and every day I think about doing things that would make coach proud. It worries me to this day because I never want to let the program down.

“It’s overwhelming to think about it. Coach Smith did so much, he was so good for people. He would be proud of what we’ve done on the court, but coach was always able to do so much more for the players off the court. I’m glad his name is on the building. It’s going to be hard to think of my name on the floor in his building.

“I would have been perfectly content to be Coach Smith’s assistant for 30 years, but then he thought it was a good idea for me to go Kansas. From that moment on, I’ve tried to do things that he would have approved of. We’ve won some games and some tournaments, and we’ve even won a few championships. Even with the Hall of Fame [induction] in 2007, I’ve never allowed myself to look back on all that. This is probably the first time I can say I think we’ve done OK.”