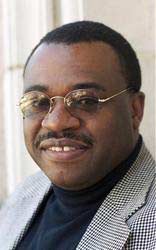 Julius Nyang’oro, one of the focal points of an academic scandal that spun off the NCAA’s investigation into UNC’s football program, was indicted by a grand jury Monday on a felony charge of obtaining property by false pretenses — specifically, taking $12,000 in pay despite not showing up to teach a class.

The University pressured Nyang’oro to resign as chair of the department of African and Afro-American studies in 2011 and allowed him to retire in June 2012, but it went after the salary it had paid him for a summer 2011 course that he set up with a lecture format; students were left to produce a paper but never saw the professor.

Orange County District Attorney James Woodall ’82 (AB, ’85 JD) said Nyang’oro likely would not go to jail on the lower-level felony charge. Woodall said there could be a second indictment in the case, possibly in January. He said the person being investigated is not currently a University employee but would not identify the person.

Nyang’oro appeared in Orange District Court on Dec. 3. He did not speak, but his lawyer said Nyang’oro believed he was innocent and would fight the charge, which came after a State Bureau of Investigation probe that took a year and a half.

Nyang’oro’s indictment came after a State Bureau of Investigation probe that took a year and a half. He was expected in court on Tuesday.

Woodall said information still was being gathered until recently, when he stopped the probe.

“We weren’t going to find any other criminal activities that took place, and so we just couldn’t continue to expend resources investigating because the bottom line is … that whatever went on in that department, most of it is an academic issue within the University,” he said. “It’s about academic integrity.

“The vast majority of what we looked at would be issues for the University to address. They’re not issues for me to address on the criminal side.”

There is no indication that the indictment will prompt further action by the University. A 2012 investigation into fraudulent academic practices, led by former Gov. Jim Martin and an outside consulting firm, essentially exonerated the athletics department. And the NCAA has said it does not anticipate investigating UNC further in this matter.

Nyang’oro has been found in multiple investigations to be at the source of a long-term practice of giving good grades in courses that were heavily populated by varsity athletes and that involved little academic work.

He became the focus of suspicion after football player Michael McAdoo ’12 was found, in the course of an NCAA investigation, to have had improper help from a tutor; subsequently, McAdoo was found to have plagiarized a paper he wrote for a class taught by Nyang’oro, who did not catch the plagiarism. Another player, Marvin Austin ’12, was found to have taken and received a B-plus in an upper-level class taught by Nyang’oro before Austin started his first full semester at UNC.

An internal investigation that covered the period of summer 2007 through summer 2011 turned up nine classes containing 59 students that were found to be “aberrant” — showing “no evidence that the faculty member listed as instructor of record or any other faculty member actually supervised the course and graded the work, although grade rolls were signed and submitted.”

It said 43 other courses were either aberrant or were “taught irregularly” — in other words, “the instructor provided an assignment and evidently graded the resultant paper, but engaged in limited or no classroom or other instructional contact with the student.”

It said that while there was no evidence that Nyang’oro promoted the offering of aberrant courses, he “bears responsibility as Department Chair for the grave mistakes made during his watch.”

Jonathan Hartlyn and William Andrews, professors and associate deans in the College of Arts and Sciences who led the investigation, wrote in a 10-page report: “We are deeply disturbed by what we have learned in the course of our review. Our review has exposed numerous violations of professional trust, affecting the relationship of faculty and students and the relationships among faculty colleagues in this department. These violations have undermined the educational experience of a number of students, have the potential to generate unfounded doubt and mistrust toward the department and its faculty, and could harm the academic reputation of the university.”

UNC officials said they did not find evidence that Nyang’oro and the athletics department conspired to set up easy courses that athletes could use to bolster their athletic eligibility.

The focus of the SBI’s investigation was a single class set up on short notice in summer 2011 — 18 football players and one former player made up the entire enrollment of the class. Nyang’oro, listed as the instructor, did not show up to teach it.

“Professor Nyang’oro had signed a Summer School contract that made it clear that the course was to be taught in a lecture format, but he instead taught it as an independent study,” then-Chancellor Holden Thorp ’86 told UNC’s trustees. “Students in the class wrote papers and were graded. Nevertheless, Professor Nyang’oro did not meet the University’s instructional expectations.”

Thorp informed the trustees that he intended to take back the $12,000 Nyang’oro was paid for the class.

In June 2013, The News & Observer of Raleigh reported details from email exchanges between Nyang’oro and academic counselors for athletes that it said “strongly indicate that term-paper-only courses were arranged for the convenience of athletes.”

Athletes made up 45 percent of the enrollments in the suspect classes, even though athletes represent less than 5 percent of the student body. The vast majority of the athletes were football players.

A subsequent UNC-commissioned investigation, led by former governor Martin, found that the fraud constituted an academic scandal but not an athletics one, since students who were not athletes had the same access to the classes and received similar grades. That probe also found no evidence that athletics officials played a part in setting up the classes.

The University issued the following statement on news of the indictment: “We appreciate the efforts of Mr. Woodall and the State Bureau of Investigation. The University cooperated fully and provided unrestricted access to any information requested during the SBI’s investigation. As validated by the Southern Association of Colleges and Schools Commission on Colleges, the academic policies, procedures and practices implemented over the past two years are thorough and comprehensive. The University strongly believes that everything possible has been done to prevent these irregularities from happening again.”

Chancellor Carol Folt said the action described in the indictment is completely inconsistent with the standards and aspirations of this great institution. This has been a difficult chapter in the University’s history, and we have learned many lessons. I am confident, because of effective processes already put in place, we are moving ahead as a stronger institution with more transparent academic policies, procedures and safeguards.”