The day Oliver Smithies learned he had received the Nobel Prize for Physiology or Medicine in 2007, UNC medical school quickly threw a party in the atrium of the Lineberger Comprehensive Cancer Center to celebrate. Oliver spoke briefly, then graciously excused himself to hurry back to his office. He had work to do on a National Institutes of Health grant he needed to resubmit because it had been rejected. 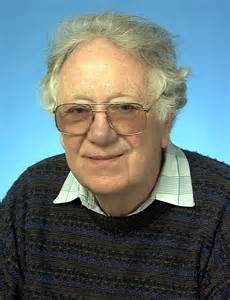 One might think that having won a Nobel Prize, a scientist and inventor in his late 80s could rest on his laurels. Oliver would disagree. There is still knowledge to be uncovered, and he still comes into the lab every day and conducts his own experiments. He stays focused on his work of understanding processes, and advancing the field of genetics.

Oliver, born in England, says he inherited his mechanical aptitude from his father. From an early age, he and his father tinkered on the aging family car to keep it running. He developed a habit of making new devices from what most people call junk. He continued tinkering in a lab at the University of Oxford, where he was awarded a scholarship. He dropped out of medical school to study chemistry, earning a doctorate in biochemistry.

The Commonwealth Fund fellowship he was awarded for a postdoctoral position at the University of Wisconsin brought him to the United States. When the fellowship ended, he went to the Connaught Medical Research Laboratories at the University of Toronto, where he was allowed to work on anything he wanted, as long as it related to insulin. While looking for a precursor to insulin — which he never found — he invented starch gel electrophoresis, which is useful for analyzing proteins. With the starch gel method, he discovered previously unknown differences in plasma proteins, shifting his interest toward genetics. When his visa allowed, he returned to the University of Wisconsin for the next 25 years.

For his discoveries, Oliver has received numerous honors and recognitions, including the North Carolina Award for Science in 1993, the Albert Lasker Award for Basic Medical Research in 2001, and the O. Max Gardner Award and the Wolf Prize for Medicine in 2002. The Nobel recognizes his contribution to introducing gene modifications to mice by the use of embryonic stem cells, giving the mice human-like characteristics to more accurately predict how treatments might work in humans.

Throughout his career, Oliver has indulged his natural inclination to pursue experiments with little regard for the time required to reach a conclusion. He has an unusual empathy for students, said Dr. Marshall Edgell, who recruited Oliver to UNC in 1988. In his Nobel lecture, Oliver made several points directed specifically at students.

Former medical school Dean Stuart Bondurant ’50, part of the team that recruited Oliver to Carolina, had been impressed by his scientific originality and his focus. “When we recruited him,” Stuart said, “he sat in my office and described exactly the research he would do if we provided him with the resources. And when he got here, that’s exactly what he did. And that’s the research that won him the Nobel Prize.”

Oliver encourages people to find and pursue what they like in life, whether or not it involves science. When a friend developed an interest in astrophotography, Oliver participated in the project financially; he told his friend that each new astrophoto gave him “goose bumps of excitement.”

Oliver’s interest in flying appeared in his first decade of life as he read fictional accounts of a World War I fighter pilot. At age 38, he took flying lessons and has been flying solo and with friends for the past 50 years. In 1980, he co-piloted a record-winning flight for a single-engine aircraft across the Atlantic from Labrador to Iceland, and on to Scotland — a record that held for 20 years.

His more than 4,000 hours of piloting in all sorts of weather included a trip last fall to New England with his longtime friend George Bandow, a physician who conducted Oliver’s flight physicals for years. They went island-hopping from Block Island to Martha’s Vineyard and Cape Cod, and along the coast of Boston Harbor and New Hampshire to Maine. On the last day, Bandow plotted a route over New Hampshire and Vermont to see the gorgeous fall colors. Oliver went along enthusiastically, quietly knowing that with his red/green color-blindness, the fall foliage would look quite different to him.

For Oliver, the joy was in the journey, as it has been every day of his career.